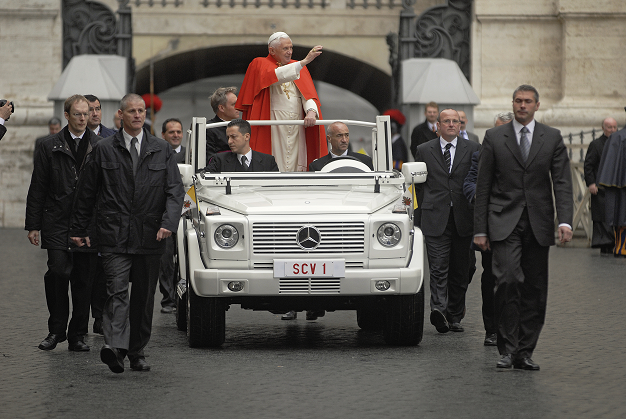 Prosperity churches  and their pastors have been big news of late, with resurrections bringing scrutiny to this flamboyant wing of Christianity. But what do the most prosperous and pious of church leaders drive?

We’ve investigated and found that Mercedes-Benz has traditionally dominated the market for clerical cars.

Alph Lukau is very much the prosperity pastor of the moment, thanks in no small part to his resurrection theatrics. But when Alph isn’t preaching or resurrecting, he likes to get around Johannesburg in something that is more privileged than proletarian.

Lukau’s choice of transport is the very definition of status: a Rolls-Royce Wraith. A four-seater luxury grand tourer like no other, the Wraith is appreciably quick too, thanks to its BMW-sourced 6.6-litre turbocharged V12. Despite a kerb weight of nearly 2.5t, the Wraith’s V12 is good for 465kW and 870Nm, which means there is always performance in reserve.

When the Pope rides, he can’t sacrifice reliability. As God’s official agent upon earth, time is of the utmost importance to the Pontiff and therefore, when he does a drive-and-wave day – every second counts.

It therefore makes perfect sense that one of the Vatican’s favourite Popemobiles has been the classic Geländenwagen cabriolet. Especially the G500 version, which became one of the most famous of all Popemobiles on its debit in 2007.

Finish in all-white (with a matching white cabin), the Popemobile G500 also features a drop-down windscreen and custom roll-hoop, for his Holiness to hold onto whilst waving to crowds. One of the mechanical advantages of the classic Geländenwagen as a Popemobile has been its ability to run in low-range, which means the G500 could crawl along at excruciatingly slow speeds, which is exactly what the Pope requires.

Before the X-Class, Mercedes-Benz’s most obvious candidate for a bakkie conversion was the large ML-Series SUV platform. How we all hoped for an ML bakkie, but it never happened.

The Vatican has one, though. In 2002 Mercedes-Benz built a special ML430 for the Pope, with an enclosed bulletproof glass box on the back, for his Holiness to sit in and wave. The short-wheel base proportions and semi-loadbin lines worked excellently with the ML’s styling – which was even more annoying and baiting to those who believed that Mercedes-Benz was missing an excellent opportunity to build a luxury bakkie form its SUV platform. In 2012, a decade after receiving his first ML, the Pope got a third-generation one. It followed the same configuration, with a pseudo single-cab bakkie conversion and glass box on the back.

Finished in diamond white, this ML was unique regarding its overall height – which was lower than any other third-generation ML ever built. Engineers trimmed the roof height to enable air transport for the Popemobile, which would have to keep up with the punishing travel and public appearance schedule of its owner.

As with all other Popemobiles, the crucial feature is enabling the Pope to stand comfortably for hours, whist waving to, or addressing, crowds. To assist with this goal, the ML featured a higher floor structure. Perhaps the most pious of all modern Popemobiles, and one which appeals to those believers who are all about sustainability.

It might look like a humble Renault Kangoo minivan, but this custom Renault Popemobile featured the French company’s vanguard Zoe electric architecture. That meant this Kangoo Maxi Z.E. was driven by a 44kW electric motor, sourcing its energy from lithium-ion batteries.

The advantage of this Popemobile was its silent operation, and 170km range, which meant that if the Holy Father did say anything whilst driving past a crowd, they would hear his every word. We live in a world where facts and fiction get blurred
In times of uncertainty you need journalism you can trust. For only R75 per month, you have access to a world of in-depth analyses, investigative journalism, top opinions and a range of features. Journalism strengthens democracy. Invest in the future today.
Subscribe to News24
Related Links
WATCH: Holy Lamborghini! Incredible 'Popemobiles' through the years
Holy Lambo! Pope Francis' epic Huracan sells for R10-million
Next on Wheels24
Does having an advanced driving certificate make you a better driver?