SA Car of the Year: What you need to know about the 12 finalists

Cape Town - The 2016 SA Car of the Year competitors were put through stringent vehicle tests to determine which of the 12 finalists deserves the title. Each finalist was scored and measured against its class competitors.

The two evaluation days took place in Pretoria at the Gerotek Testing Facility earlier in February. The winner will be announced on March 8 at a gala event in Gauteng.

The cream of SA's vehicle crop

In recent years, the Car of the Year competition has sparked much controversy. In 2016, there are new rules and changes to the competition - which the SAGMJ (South African Guild of Motoring Journalists) has tried to keep as transparent as possible.

Wheels24's Janine Van der Post (VDP), one of the 27 jury members, evaluated each vehicle during testing. She shares her views on each of the finalists.

Which vehicle do you think should be crowned the 2016 SA Car of the Year? Find out all you need to know about the 12 finalists and vote in our homepage voting booth.

Here are the 12 finalists (in no particular order).

Opel South Africa sees its fifth-generation Corsa as “appealing to singles, professionals with young children, and young-at-heart drivers who love great cars and want something that will set them apart from the crowd”.

The ‘face’ of the car has wing-shaped headlights/daytime running lights and a trapezoidal grille with a bar supporting the Opel badge. Foul-weather lights are embedded in two low air inlets with model-specific chromed – Opel says the idea is to make the car look wider. VDP: "The Opel Corsa proved rather surprising during the two evaluation days. What it lacks in performance, it more than makes up in handling and dynamics."

• Comfortable on the road, good handling.

The new XE arrived in South Africa in August 2015 and Jaguar hopes its new mid-size sedan will take on local D-segment rivals. The XE also forms part of a new model assault for SA which includes the recently launched XF and the upcoming F-Pace.

VDP: "The Jaguar XE proved fun to drive but it's engine and gearbox disappointed in terms of performance and handling during testing."

• Frugal relative to its power

• Comfortable on the road, great to drive

#WesBankCOTY finalists have outstanding automotive engineering but there can only be 1 winner, good luck to the XE. pic.twitter.com/L9A2yBDsnj

Its current iteration is the best-looking 308 yet and few would argue that it's also one of the most stylish hatchbacks in its class. It's more compact than its predecessor though it gains a more spacious interior; better looks, a large boot, improved ergonomics and trim.

VDP: "This is the most stylish 308 the French automaker has made yet. It has much to like and ticks many boxes as a great hatchback. Driving pleasure is more than suffice."

• Great styling, stands out in the premium hatch market

• Practical - four seats, plenty of legroom and a large boot.

A sporty and compact SUV that has the practicality of 5+2 seating along with superb on- and off-road capabilities in the premium sector in the SA market. Clearly identifiable by its clam-shell bonnet and unique design, the Discovery Sport hopes to build on the success of the Range Rover Evoque in the local compact SUV market.

VDP: "The Disco Sport is an awesome off-road SUV and is packed with bells and whistles. It's easy to see why this vehicle is popular."

• Compact dimensions for the city, robust 4x4 for the bundus

• Despite its 4x4 roots it handles and drives like a car

The competition is on! The 2016 #WesBankCOTY finalists have been announced and the Discovery Sport is one of them. pic.twitter.com/FHcraf4QGx

Good-looking from the front with more than a hint of a Mazda rotor design cue found in that grille area, the Mazda2 unashamedly mocks its siblings in profile – but there’s nothing wrong with that. From the rear the newcomer does bear existing styling from the outgoing model – but cleverly ‘nipped and tucked’ this time around.

There are six models in the all-new (fourth generation) Mazda2 line-up with a choice of two engines: 1.5-litre petrol (82kW/145Nm) and 77kW/250Nm in the case of the intercooled turbodiesel.

VDP: "The Mazda2 is most impressive underdog of the pack. It performed incredibly well - on all aspects - when least expected.''

• Great value - a lot of kit for your hard-earned rand

#WesBankCOTY finalist. The Mazda2 is ready for the Static Evaluation. pic.twitter.com/EwLX1r8G7f

The third generation of Kia’s top-end wagon, the Sorento, was launched in South Africa in 2015. It sports all-new bodyshell, a powerful new diesel engine and a level of interior design and quality that raises the car to luxury standards. The four-model range is available in five or seven-seat configurations.

VDP: "The Sorento is a great people-mover with reasonably good performance on gravel roads. Due to its size and power it felt a bit sluggish at the higher altitude."

We're at Gerotek test track to witness a shakedown of all 12 @SAGMJ #WesBankCOTY finalists. Do us proud Sorento! pic.twitter.com/J3Xpa9orGk

The innovative and quirky Cactus is best described as an SUV with a difference. Its flanks feature one of the Cactus’ key innovations: those “in-your-face” and substantial body panels the manufacturer likes to call Airbumps that are basically malleable protective panels of compelling visual interest.

VDP: "The Cactus impressed many jury members who thought it was not a worthy contender as Car of the Year finalist. It's a quirky car, but practical and economical."

• Incredibly frugal for its size.

• One of the most unique vehicles in its class

@CitroenSA is a finalist in the 2016 #WesBankCOTY competition. Is this compact crossover the best car in its class? pic.twitter.com/LkU2DVqHrw

The HR-V is aimed at young families and the 1.8 litre Elegance receives a number of upgrades such as new alloys, auto LED headlights with daytime running lights, leather trim, leather steering wheel, auto aircon, heated front seats and a rear armrest. It's another solid, reliable people-carrier from Honda. 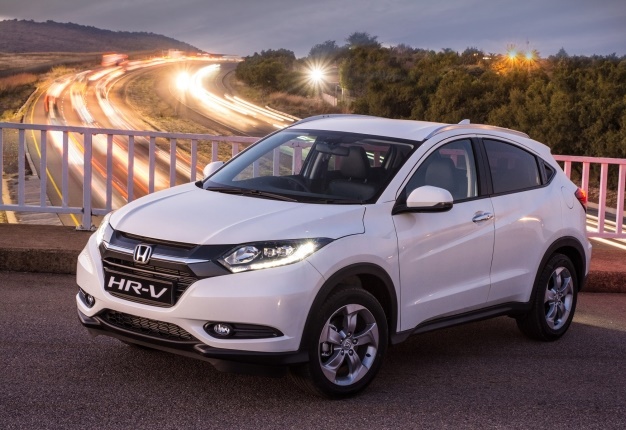 VDP: ''Honda is renowned for its quality cars and the HR-V is no different. Great design inside and out and adequate engine... I wouldn't be surprised if it rates highly by all jury members.''

The new Ford Fusion, says the automaker, has ''refinement and craftsmanship, technologies including Ford's adaptive diode headlights and multi-contour seats, and sophisticated design''.

VDP: ''The Fusion remains Wheels24' users' favourite in our Users' Car of the Year poll. The practical sedan proved a crowd-pleaser on many fronts during testing.''

Is the @FordSouthAfrica #Fusion the best car in its class? This shot taken on day two of the evaluation #WesBankCOTY pic.twitter.com/1EB7ma9mRd

Opel takes on local super mini rival the Fiat 500 with a stylish, compact hatchback of its own - the Adam. Styling is clean and simple and the floating roof is a winner. Its compact dimensions makes the Adam great for great city driving and squeezing into a tight parking space, especially with the standard "parking assistant".

Which one of these two beauties do you think should be crowned #COTY 2016? here: https://t.co/tQZhT7fkge pic.twitter.com/NuERov6aWP

VDP: ''The Adam makes a for great city-car for youngsters - or the young at heart - on the move. Its performance was a bit underwhelming but litte Adam makes for a sassy little car with oodles of personality.''

• One of the most radical cars Opel has built

Volvo has pulled all the stops for the XC90 making it the most technologically advanced vehicle its built yet. Apart from its great design and practicality , inside is where it truly shines - the information centre is a large touchscreen and behaves like a smartphone/tablet, allowing for finger-swipes and hand gestures when accessing various menus.

VDP: ''Finding fault on the XC90 proves a difficult task. It's packed to the brim with innovative technology and safety features. It's comfortable, luxurious and everything else that's made of sugar and spice. But, it's steep pricetag is hard to swallow..."

• One of the most technology advanced vehicles in SA

• It's headlights are in the shape of Thor's hammer

• It's large, luxury SUV and is supremely comfortable on the road

The BMW's 'i-car' sub-brand represents huge shift in direction for the automaker as it develops green friendly electric vehicles and hybrids. The i3 has many positives including great design inside and out, environmentally-friendly and quiet. However, it's also affected by the same issues plaguing all EVs - recharging and lack of charging infrastructure.

VDP: "The i3 struggled during car of the year tests and was overworked during the testing days. It needed charging - often! Despite battery power running out the car went into charge while using the range extender engine.

"It has a clever interior designs and a feisty attitude for an electric car, and did not hesitate to raise eyebrows with good braking and handling results."

• Step in the right direction for BMW - new 'i'-car range.

• Great to drive, quiet on the road and environmentally friendly

• Easy to charge - is sold with a wall-charge unit

We asked Wheels24 users "Which vehicle do you think should be crowned the 2016 SA Car of the Year?" in our homepage voting booth.

Our poll has garnered more than 6300 votes.

We live in a world where facts and fiction get blurred
In times of uncertainty you need journalism you can trust. For 14 free days, you can have access to a world of in-depth analyses, investigative journalism, top opinions and a range of features. Journalism strengthens democracy. Invest in the future today. Thereafter you will be billed R75 per month. You can cancel anytime and if you cancel within 14 days you won't be billed.
Subscribe to News24
Related Links
SA Car of the year: Voting heats up
Next on Wheels24
SEE | Where does SA's imported cars come from? One country dominates...