Cape Town - According to the World Health Organisation (WHO), South Africa tops the list of drunk-driving related deaths in the world.

With the 2016/17 holiday season approaching it's critical to highlight the affect drunk-driving has on SA's roads.

A local non-profitable organisation, South Africans against Drunk Driving (SADD), has made it their mission to fight against drunk driving and alcohol abuse.

The WHO said: “South Africa remains one of the more dangerous countries for road safety, with 25.1 deaths per 100 000 population. The report noted however, that there has been a steady improvement in danger levels since a peak of 33 deaths per 100 000 people, recorded in 2006.”

Apart from alcohol abuse, the major causes for fatal road deaths are speeding, not wearing seatbelts, lack of child restraints and no helmets for motorcyclists.

Have you or your family been the victim of drunk driving in SA? Email us  and reach us via Facebook  and Twitter.

Despite numerous government campaigns, many road users are guilty of driving while intoxicated. 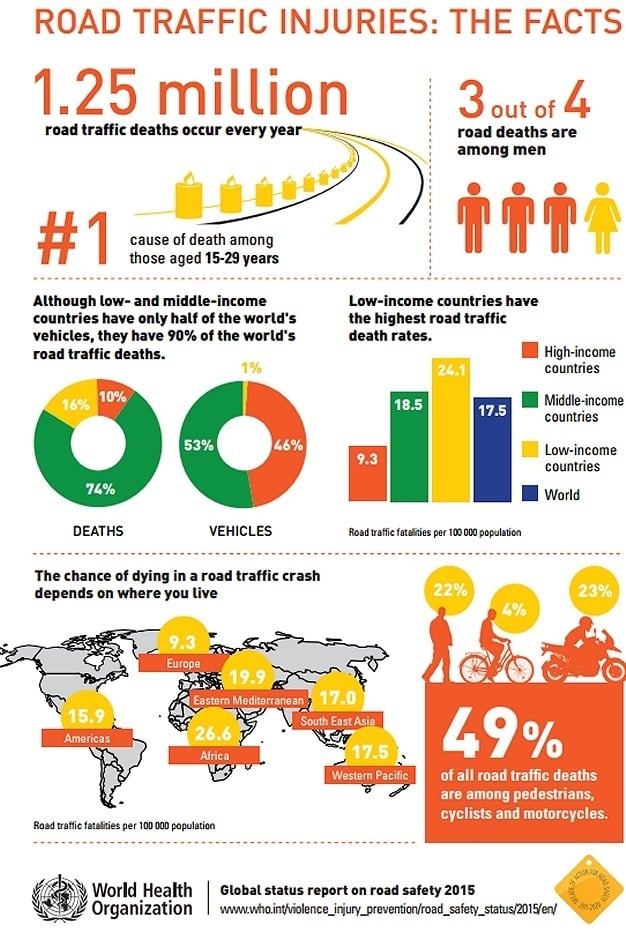 SADD raises awareness about the dangers of drunk driving, the consequences, as well as how lives are altered or lost as a result of reckless road behaviour.

The organisation was founded by alcohol and drug educator, counselor and and psychiatric social worker, Caro Smit. For Smit the fight against drunk motorists is all too personal; her 23-year-old son, Chas, was killed in September 2005 by a drunk driver.

Smit, chairperson for SADD and campaigner against drunk driving, tells us more about the group:

Wheels24: What is SADD and why start an organisation against this particular problem?

SADD: SADD is not about anger and/or revenge - it is about the future, bringing down deaths and injuries, and saving families from distress and heartache.

It could also be called SA Against Dangerous Driving/Destructive Decisions - as we deal with seatbelt use, speeding, texting/cellphone use and driving, youth drinking too much alcohol and driving dangerously. SADD is also about supporting victims and their families after drunk driving crashes, and offering pamphlets and advice for court.

Wheels24: What is your aim/mission?

Wheels24: Do you offer support to affected families?

SADD: We offer special pamphlets on grief as relates to drunk driving deaths or injuries for adults, children, friends, or grandparents. Death by drunk driving is different to an anticipated death. Death caused by drunk driving is preventable, violent, and someone is to blame. And in most cases the family do not have time to say goodbye.

Wheels24: How do you promote your cause/raise awareness?

SADD: Through the SADD website, Twitter and the official SADD Facebook page. We also work in collaboration with a number of media outlets and often give commentary on road safety.

Wheels24: How prevalent is underage drinking?

SADD: We have raised an enormous amount of education and awareness about the effect of excessive drinking on the under 21-year-old brain. SADD works in schools an 12 universities and has developed manuals for these groups so that they can run the programs year after year.

SADD works with government's health and welfare departments and support the drive to ban alcohol advertising, and to raise the drinking age to 21.

Wheels24: Have you had any success in your battle against drunk driving?

SADD: Yes. We managed to jail two killers after our two protests outside courts in Durban. This is a rare occurrence in SA. The media and our media partners play a huge role in helping SADD raise awareness of this very preventable crime and keeping victims in the public's thoughts. Most times the accused have all the rights and the victims are soon forgotten.

Wheels24: Who do you assist? Families or individuals etc.

SADD: Anyone. We also do Wellness days and train anyone on the issues of alcohol abuse and drunk driving.

Wheels24: Which organisations do you work with?

SADD: We are a member of  the "Global Alliance of NGOs Advocating for Road Safety and Road Victims" which was started and is supported by the WHO and World Bank. We work with WHO, Global Road Safety Partnership Global and GRSP ZA, the AA, Wheelwell, N3TC, Imperial, JPSA, Nicro, and the Department of Transport - especially in the Western Cape.

Wheels24: Statistically, how big a part does alcohol play in road accidents?

SADD: 60% of the cases. And it is probably much higher because both drivers are not tested at all crash scenes, as it happens overseas.

Wheels24: How can the public get involved?

1. Members of the public can join and get involved with SADD (free) by clicking here.

2. Refer victims of drink/drunk driving to us. People often commit suicide after killing someone when driving under the influence. SADD provides the necessary support for these to deal with what happened and to come to terms with what they've done.

3. Become a "Road Safety Ambassador" and receive our Drink Driving/Walking DVD you can show in schools, work place, etc.

4. Participate in a "World Day of Remembrance" - contact us for more details.

5. Be completely outraged by our extremely high death and injury rate, and speak out about it.

6. Give donations or sponsorship and aid SADD in promoting road safety.

7. SADD relies on the support from the public. We welcome support of any kind, be it financial, volunteering, or fundraising.

We agree! Do not climb in a car with a #DUI. Just supporting a family now whose 24 yr old son was killed by his intoxicated best friend https://t.co/xWaDBwxrzV

We live in a world where facts and fiction get blurred
In times of uncertainty you need journalism you can trust. For only R75 per month, you have access to a world of in-depth analyses, investigative journalism, top opinions and a range of features. Journalism strengthens democracy. Invest in the future today.
Subscribe to News24
Related Links
Bad driving in SA: Users' shocking videos
#BoozeFreeRoads: Controversial Drager system returns to Western Cape
Caught drunk driving in SA? Why insurance claims are rejected
Next on Wheels24
WATCH | 5 important tyre-checking tips