This marked a significant day for BMW as the company’s manufacturing plant at Rosslyn, Tshwane, continues to ramp up production of the X3.

Tim Abbott, CEO of BMW and Sub-Saharan Africa said it was "a big moment for us at BMW".

"It’s the result of a R6.1bn investment into the country and the culmination of three years of hard work and planning."

READ: Production begins of the new X3 in SA: The most 'local' BMW built yet

"It’s really exciting to know that the BMW plant in Rosslyn has joined the enormous success story of the X models globally, and goes to show the power of combining good industrial policy and foreign investment,” Abbott added.

In terms of the Automotive Production and Development Programme (APDP), BMW announced a R6.1bn investment to prepare the Rosslyn facility, and the associates who work there, for X3 production.

BMW SA CEO Tim Abbot addressing the media at the launch of the new X3 launch in Knysna. pic.twitter.com/p1ANl2JimZ

It is one of the biggest single automotive investments in SA history. In February 2018, Plant Rosslyn produced the last of 1 191 604 BMW 3 Series cars built over five model generations and 35 years.

Getting bigger and better

Upgrading the plant for X3 production has represented the largest infrastructure upgrade in the plant’s history, but it has gone ahead on time and without any unplanned disruptions.

On Friday, in the culmination of these efforts, the first South African-built X3s were loaded onto a train bound for their European customers.

The BMW Vehicle Distribution Centre in Rosslyn can accommodate up to three train dispatches a week, with each transport capable of carrying up to 160 cars. 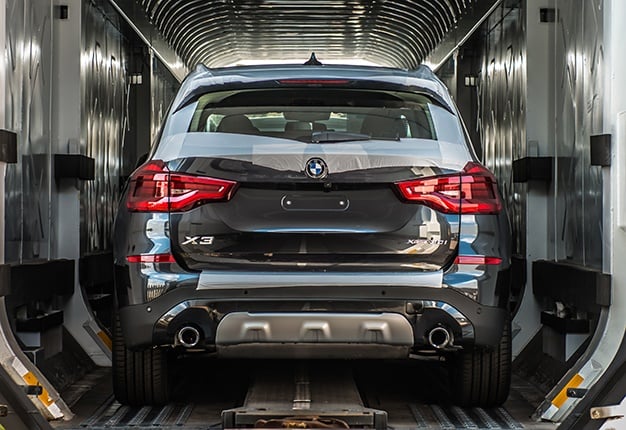 BMW Rosslyn is a state-of-the-art facility, withX3 production initially planned with a maximum capacity of 71 000 units a year.

However, BMW under-estimated the phenomenal demand for the new X3 and, after a further R160m investment to increase linespeed, the maximum capacity of the plant was raised almost 10% to 76000 units a year.

Within this maximum capacity, BMW is confident that the plant will produce record volumes next year. This will add to the growing success of the X models across the world, which now make up more than 30% of the company's global volume.

We live in a world where facts and fiction get blurred
In times of uncertainty you need journalism you can trust. For only R75 per month, you have access to a world of in-depth analyses, investigative journalism, top opinions and a range of features. Journalism strengthens democracy. Invest in the future today.
Subscribe to News24
Related Links
Production begins of the new X3 in SA: The most 'local' BMW built yet
Final BMW 3 Series Sedan rolls off SA production line, makes way for X3
Next on Wheels24
The numbers are in: Here's how much you paid for fuel in South Africa in 2020