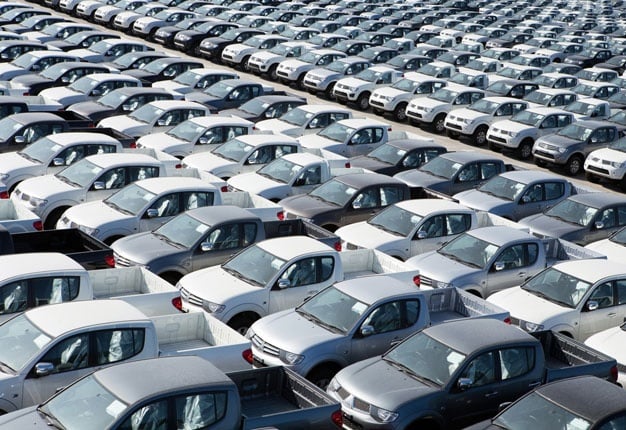 <B>LOCAL SALES WOES:</B> 'It’s difficult not to have a negative outlook for the medium- to long-term future, given our current economic reality,' says TransUnion as it examines the affect of SA's Junk Status on vehicle prices. <I>Image: Motorpress</I>

Johannesburg- The South African motoring industry’s first quarter of 2017 was characterised by a slight strengthening in the performance of the Rand.

Yet the positive benefits of a sturdier currency were short-lived, according to the TransUnion's SA Vehicle Pricing Index (VPI). It's expected that the industry will fall short of WesBank’s 2017 prediction at the “Car of the Year Event” of a 1.7% (557 000) increase in total sales.

The VPI report examines the link between the year-on-year increase in vehicle pricing for new and used vehicles, drawing data from a basket of passenger vehicles incorporated from the top 15 volume manufacturers. Data is collected from across the industry and used to create the VPI.

READ: Best-selling bakkies in SA - Hilux, Ranger slug it out during in March

A slight surge is evident in vehicle sales in this quarter and, according to National Association of Automobile Manufacturers South Africa (NAAMSA), there has been a yearly increase of 2.1% in passenger vehicles and a marginal 1.1% increase on light commercial vehicles sales. Volkswagen and Toyota have captured more than 50% of the new car market, and lead the used car market as well, although there is not much difference separating the top tier from Ford, Hyundai and Mercedes-Benz.

According to the report, the further increase in new vehicle pricing can be attributed to domestic reliance on high volumes of imported vehicles that are subject to currency volatility. Furthermore, an underperforming GDP growth rate and economic instability has led to consumers enduring increases at a rate above CPI (Consumer Price Index) for the last five quarters - a trend that will continue throughout the year.

Derick de Vries, CEO of Auto Information Solutions at TransUnion, said: “With the recent ratings downgrade to Junk Status we are expecting to see lower access to credit, a weakening currency, rising inflation and even higher interest rates. Consumers will have even less disposable income which will force individuals to hold onto their vehicles for longer instead of replacing them."

Financial registration data has shown an upswing in consumer interest for used vehicles, with an increase of 26% in new finance deals this quarter. New passenger finance deals have increased by 27% and the ratio between new and used vehicles financed has decreased from 2.50% to 2.49% from Q4 2016 to Q1 2017.

De Vries said: “This means that for every new vehicle, 2.49 used vehicles are financed. Another continuing trend is that the percentage of cars, both new and used, being financed under R200 000 remains constant from last quarter which shows that consumers are 'buying down' and looking for more value for their money.

“However, this consumer shift opens up new possibilities for the industry in terms of used vehicles and it is worth noting that 40% of all used vehicles that were financed in this quarter were less than two years old. This 40% can be further broken down into 25% of vehicles that are under a year old, while 15% are under two years. But as the demand for used vehicles increases and supply comes under pressure this is likely to push the price up on used vehicles further and a shift back to the new car market.”

The VPI report also featured information about the impact of the recent Junk Status ratings downgrade to vehicle sales and price inflation in the medium- and long-term.  With the possibility of a recession looming, should the Rand depreciate to R16-R17 against the dollar, this will have an extremely negative effect on vehicle index for new cars. Automakers may be forced to pass on the higher pricing to consumers which will result in a contraction of vehicle sales, as more than 70% of vehicles are imported and subject to currency volatility.

Additionally, finance houses could see an increase in risk premiums and perceived greater risk in the current economic environment may lead to higher interest rates charged to consumers. Cost of capital could become more expensive and result in lenders increasing interest rates charged while less disposable income could negatively impact approval rates. Consumers also might be faced with increased short-term insurance premiums as a result of increased repair costs based on the fact that 70% of parts are imported and subject to currency volatility.

De Vries concluded.“It’s difficult not to have a negative outlook for the medium- to long-term future, given our current economic reality. This might be an opportune time for consumers to consider fixed interest rates when taking out new loans, to have security in knowing that their monthly payments won’t rise should interest rates increase.”

Top 10 passenger cars for March 2017: Scroll through the slides below

We live in a world where facts and fiction get blurred
In times of uncertainty you need journalism you can trust. For only R75 per month, you have access to a world of in-depth analyses, investigative journalism, top opinions and a range of features. Journalism strengthens democracy. Invest in the future today.
Subscribe to News24
Next on Wheels24
Best buys: Top (value-driven) bakkie picks for agribusiness owners in SA