The iconic Volkswagen Polo – a modern-day legend when it comes to car sales in South Africa, has been dethroned by the mighty Ford Ranger.

According to George Mienie, AutoTrader CEO, the Ford bakkie was the top-selling used vehicle in South Africa during the second half of 2019.

"We have just released the next iteration of our Car Industry Report covering the period 1 July to 31 December 2019, and this is one of the most notable facts to have surfaced" he notes.

The Volkswagen Polo is, after all, a vehicle that clocks up one sales achievement after the other.

"It's automatically assumed that the Polo will be the top seller in the used car market in South Africa because, quite honestly, it usually is. But now our data shows the number one spot for this period has been taken by the Ranger," he notes. According to Mienie, the average purchase price for a Ranger during the period under review was R301 972, with an average mileage of 84 867 km and an average year model of 2015.

Mienie notes that it’s interesting to see that the Ranger outsold the Hilux in the used vehicle market: "The Toyota dominates new vehicle sales – year after year. But used vehicle buyers definitely favour the Ranger. So too did the judges of the 2020 International Pickup Award; they rated the Ranger tops. The judges were impressed by the Ranger’s powertrain efficiencies, load volume and capability, driver and passenger comfort and safety. These attributes clearly impress South African motorists too," he comments. While it was the number one choice of used vehicle buyers in South Africa in the second half of 2019, the Ranger has long been popular. In the last annual report covering the period 1 July 2018 to 30 June 2019, the Ford Ranger was the third most sold vehicle – with an average price of R288 990, average year model of 2015 and an average mileage of 88 835km.

The Volkswagen Polo didn't exactly fall off the radar though.

"It sold the second-highest number of models in the six months ending December 2019," reveals Mienie. The average price paid for a used Polo was R206 152 while the average year of registration was 2016 and the average mileage was 57 746km.

The Polo was followed home by yet another product from the Volkswagen stable.

We live in a world where facts and fiction get blurred
In times of uncertainty you need journalism you can trust. For only R75 per month, you have access to a world of in-depth analyses, investigative journalism, top opinions and a range of features. Journalism strengthens democracy. Invest in the future today.
Subscribe to News24
Related Links
SA car sales | Vivo and Polo takes VW to the top of the charts
SA vehicle sales | Hilux gets consumers' love in February 2020
Next on Wheels24
Want a droptop V8 classic? AMG GT C Roadster available at a steal on SA's used-car market 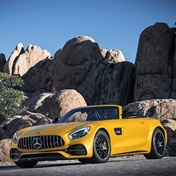 Subscribe to newsletters
Lockdown For
DAYS
HRS
MINS
Voting Booth
Do you think Lewis Hamilton deserves to be knighted by the Queen?
Please select an option Oops! Something went wrong, please try again later.
Yes, he is an incredible athlete
36% - 137 votes
No, he hasn't done anything special
21% - 80 votes
He is good, but doesn't deserve the honour
43% - 161 votes
Previous Results
Car Doctor
EXPLAINER | Why the exploded tyre on the back of that Ford Ranger caused so much...