• Fraudsters exploit the existence of enforcement orders issued in terms of the AARTO Act.
• Unwitting motorists are approached by scammers while queuing or when turned away at service counters.
•There is no warrant of arrest under AARTO.
• For more motoring stories, go to www.Wheels24.co.za

Justice Project South Africa (JPSA) is gravely concerned that fraudsters continue to exploit the existence of enforcement orders issued in terms of the AARTO Act.

These criminals operate under the noses of the officials at registering authorities and driving licence testing centres in Johannesburg and Tshwane. They can be very convincing, more especially when they approach unwitting motorists who just want to renew their vehicle licence disc or driving licence card with the minimum of fuss and delay.

While this phenomenon is not new, the sharp increase in the volume of enforcement orders issued by the RTIA recently has greatly aggravated the situation. Even a single enforcement order electronically blocks licensing transactions.

Unwitting motorists are usually approached by scammers while they are queuing or when they are turned away at service counters. Often, they are approached before they even enter the licensing facility's grounds and offered "assistance".

Soon after providing their driving licence card to these criminals, they are presented with a printout of their AARTO infringements and told to settle all of them immediately, in cash.

False claims of warrants of arrest are also used to increase the urgency, as are discounts used to sweeten the deal if they pay now. There is no warrant of arrest under AARTO.

Furthermore, the 50% discount which is provided for if the fine is paid within 32 days of the actual or presumed service of an infringement notice cannot be reinstated once it has been forfeited. Once a person has been scammed, he or she is offered little or no assistance by the licensing authorities. They are usually referred to the SA Police Service and, in many cases, find themselves being turned away by SAPS officials who tend to say: "no crime has occurred because you willingly gave your money to these people". This is simply not true. All victims of fraud "willingly" give their money to scammers.

"The authorities have been aware of these problems for many years," said JPSA's chair, Howard Dembovsky. "Although I have served on various 'security committees' convened by the City of Johannesburg to tackle this issue, none of them has met this year, and it seems they have been abandoned," he continued. 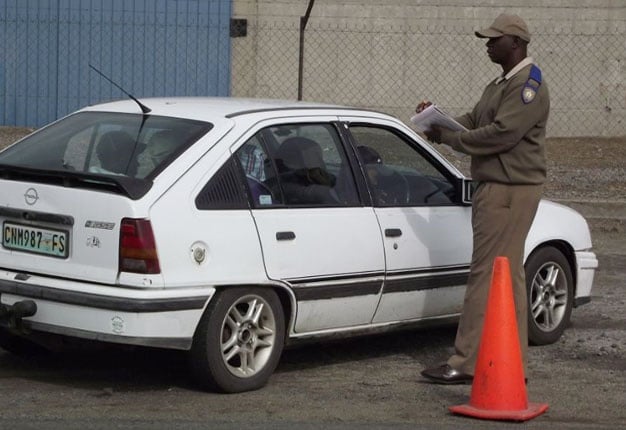 Dembovsky further expressed his concerns that: "with the intended national implementation of the AARTO Amendment Act will come so-called 'electronic service' and this will provide new opportunities for online scammers who run very little risk of being arrested, as may be the case with those who physically lurk at licensing centres."

The only way for motorists to mitigate the risk of falling prey to these scams is to deal with one's traffic fines properly.

Motorists can check their AARTO fines status HERE, after which they should exercise one of their so-called "elective options".

Although there are other platforms, JPSA advises that if one wishes to pay an AARTO fine or enforcement order, doing so at the Checkers Money Market counter or online at payCity seems to work well and immediately changes the status to "paid".

We further advise that motorists avoid paying cash to anyone and especially not to accept "assistance" from individuals that they do not know.

Motorists who wish to educate themselves regarding the processes associated with the AARTO Amendment Act may do so by visiting the website here.

We live in a world where facts and fiction get blurred
In times of uncertainty you need journalism you can trust. For 14 free days, you can have access to a world of in-depth analyses, investigative journalism, top opinions and a range of features. Journalism strengthens democracy. Invest in the future today. Thereafter you will be billed R75 per month. You can cancel anytime and if you cancel within 14 days you won't be billed.
Subscribe to News24
Related Links
It's a joke! AA slams AARTO as a mockery aimed at 'enhancing revenue collection'
It's official: Aarto scheduled to roll out in SA in July 2021 - here's how the points work
Next on Life
Judgement Day: What it takes to be a classic car judge at the popular Concours South Africa 2022