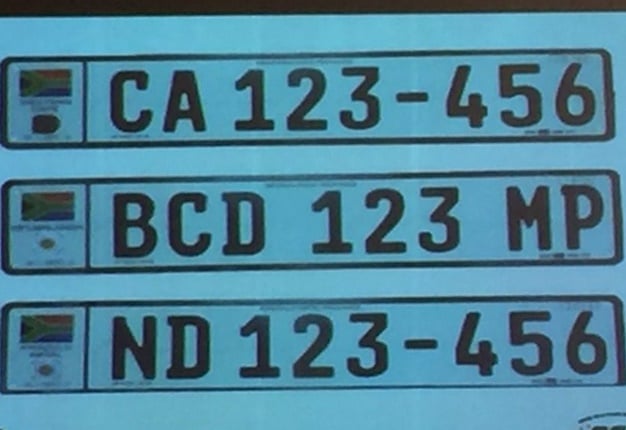 UPDATE: The National Department of Transport has released a statement, indicating it will follow through with its plans to introduce new number plates. Click here for the full story.

News of the new number plates first came to light in 2015 when the Department of Transport sent out a notice informing South Africans of its intended plan of action.

The new plates, says the department, will have to be renewed every five years. Wheels24 has contacted the Department of Transport regarding costs and a roll-out plan.

Under the new law, the new number plates must contain:

The letters and figures are set to be displayed in the following colours:

• SA flag on the top left corner.
• Licence number and licence mark of the province.
• The name of the province under the SA flag, and centred on top of the number plate.

What number plates nationwide are going to look like from next year... Renewable every 5 years... pic.twitter.com/JjYCT3Njie

The number plates will look similar to the images below: Images by the DoT

General number plates: Set to be in blue

What do you think of the new number plates? Email us your thoughts! Conradt Stoltz: Just a new bloody money making racket! Unnecessary and certainly ‎unwanted. These idiots should stop focussing on ways the fill there bottomless pockets and concentrate on REAL issues. They can paint the plates polka dot and make it whistle coombaya, I'll still be totally against.

Denys Botes: I am all for change but I cannot stand any type of opportunistic corruption. What is the reason for renewing the number plate every 5 years. Does this mean the car license is valid for 5 yrs as well? And what will this cost? By adding a Barcode etc will again allow for corruption at the highest level as surely this must go out to tender as to who will be responsible for creating this component?

We live in a world where facts and fiction get blurred
In times of uncertainty you need journalism you can trust. For only R75 per month, you have access to a world of in-depth analyses, investigative journalism, top opinions and a range of features. Journalism strengthens democracy. Invest in the future today.
Subscribe to News24
Related Links
Official paid millions for special plates
Next on Wheels24
Want a droptop V8 classic? AMG GT C Roadster available at a steal on SA's used-car market

Subscribe to newsletters
Lockdown For
DAYS
HRS
MINS
Voting Booth
Do you think Lewis Hamilton deserves to be knighted by the Queen?
Please select an option Oops! Something went wrong, please try again later.
Yes, he is an incredible athlete
36% - 139 votes
No, he hasn't done anything special
21% - 81 votes
He is good, but doesn't deserve the honour
42% - 162 votes
Previous Results
Car Doctor
EXPLAINER | Why the exploded tyre on the back of that Ford Ranger caused so much...