• The Gatsrivier 4x4 Trails is located in Ceres which extends into the Karoo.
• This trail was done in a Isuzu D-Max 300 LX 4x4 Auto
• Just R100 per vehicle R100 allows you to drive all four routes in this rocky terrain.
• For more motoring stories, go to www.wheels24.co.za

It's five days before lockdown, and although I have two other trips crammed into the coming week, I think squeezing in a short 4x4 excursion may be a good idea, too.

My fiancée, Annette, doesn't need much persuading and we quickly secure a campsite at Gatsrivier Holiday Farm, about halfway between Touwsrivier and Sutherland on an engaging gravel track — a good loosener for us and our borrowed Isuzu D-MAX 300 LX 4x4 Auto.

Our first stop after leaving home in Bot River is in Villiersdorp. I'm not at all sure why Annette is indicating I should turn into the yard of a nondescript warehouse on the outskirts of town, but I decide not to ask too many questions and do as I'm bidden. There, towering above us is the imposing hull of the once-proud Alwyn Vintcent tug. Filling me in as to why this old steam-powered seagoing vessel is resting up so far inland, Annette tells me it's a work in progress of the Villiersdorp Branch of the West Cape Tractor & Engine Club. Apparently, they saved it from being sold for scrap metal after an Australian collector decided it was too costly to transport to Melbourne.

Although its current custodians intended the tug to be moored on the nearby Theewaterskloof Dam, it seems it may now rest upon the hard at the entrance to the town, next to a coffee shop of the same name.

Have you challenged the Gatsrivier 4x4 Trail? Or, what's one of your favourite 4x4 trails in SA? Please email us.

Pienaarspoort is the next highlight on our journey to Gatsrivier. At about 6km long, this classically rugged and wonderfully peaceful Karoo poort is the ideal place for a coffee stop. It's rough, and stony surface also makes me glad I've already deflated the D-MAX's General Grabber AT tyres to 1.8 bars in the front and 1.9 bars at the rear.

But by far the most exciting stretch of gravel on the way to Gatsrivier is the Muishondberg Pass. Following a series of switchbacks, it rises quite quickly (1:5) to its maximum height of 940m and offers epic views over the timeless Ceres Karoo to the south.

We arrive at Gatsrivier at about 14.00 and make straight for our host's cottage to get the lowdown on the 4x4 tracks available. Annette and I know Wessel and Caron from an adventure bike trip we made here some years back, and it's good to see this warm and welcoming couple again. Although there are four 4x4 tracks to choose from (Windpomp, Rivier; Uitkyk and Tafelkop), we opt for Windpomp, the shortest one (10km round trip – an hour-and-a-half's driving time) to the radio mast on top of a tall flat-top mountain (1230m).

Wessel told us earlier that most of the tracks hereabouts are graded between 2 and 3, and that the only real challenging section on the 'there and back' trail we've chosen is close to the top where the gradients are pretty steep and the surface a little jagged and slippery.

Our introduction to the trail is a reasonably precipitous dry river crossing which sees us descending a shale and sand slope of about 30 degrees and climbing up a stony bank on the other side. But the D-MAX's torquey engine (380Nm) and lofty 220mm ground clearance see us through the obstacle with minimum fuss and effort.

For the next kilometre or so we edge forward slowly over a rocky jeep track, and with sidewall punctures uppermost in my mind, I'm glad I decided not to deflate the bakkie's tyres any further. After a gentle rise, we peer over the edge of what seems like a 40-degree drop, and even though I've got the seat on its highest setting to see over the bonnet more easily, I still find it best to hang out the window to gauge the best angle of descent. We're glad for these initial challenges as the remaining three kilometres before the final ascent is a bit of a doddle in 4x4 terms. Yes, there are a couple of small challenges along the way, such as the odd donga and deep ruts, but nothing to trouble even an inexperienced 4x4-er. But it's the final ascent of about 300-metres where it's advisable to engage low-range and have some basic 4x4 experience behind you.

This last section follows the farm's boundary fence. While the angle of ascent is only about 30 degrees, the surface is littered with diff-breaker rocks and loose stones, and the lean over angle in some places is around 20 degrees, so you need to edge forward carefully to avoid tipping over. But soon we're at the top, enjoying panoramic views over the farm towards Touws River in the south.

With the bakkie parked under the whistling stays which support the massive radio mast located there, Annette and I explore the lichen-covered crags and ledges of this typical hard-skilled mountain. With many dassies and other prey around, we expect at any moment to see a pair of Black Eagles appear over one of the ledges above us, as menacing to its various quarries as a Rooivalk helicopter gunship would be to us, humans.

But as much as we implore the avian Gods to send them, they don't arrive, and we settle instead for the acrobatics of a pair of Pied Crows and drink in the views of our campsite far below. Unfortunately, it reminds us we still need to set up camp and that we can't dally too long at this spectacular vantage point — next time we'll allow more time and bring a picnic. On the first part of the steep descent, I engage Hill Descent Control, and it works brilliantly. It wasn't really necessary as the gearing in low-range walks the bakkie down the steep slopes well enough, but hey, if you've got the features, you may as well use them.

It takes about 40 minutes to get back to the start of the trail and another five to our campsite. We're both ecstatic to see we've been allotted one of the sites with private ablutions, a separate toilet and shower enclosed in their own thoughtfully-designed wood and stone structures; complete with exposed brass piping, sprays, soaps and toilet paper.

This is no ordinary rough and tumble campsite. While it's secreted away under a copse of karee trees next to the mostly dry Ongeluks River, it has comforting additions like a ground net to unpack your kit on, astroturf on which to pitch your tent, a network of fine mist sprayers to keep you cool in the summer heat, some wood to get your braai fire started and all the implements you'll need to turn it into a fine cooking hearth — very special.

Feeling pretty smug in my hammock, sipping a well-deserved ice-cold beer after the effort of setting up camp, I suddenly realise that the couple of beers and 500ml of wine I packed might not be enough for an extended evening of kuiering around the fire. And then I remember that the Sink Krip (aka Tin Lizzy) Honesty Bar is just 100-metres up the road. What a brilliant concept I think to myself, walking back to camp with an armload of cold beers and ciders. They've thought of pretty much everything here, and then some.

It feels like we should label it a lazy Sunday when we wake up the next morning, and we decide to totter about the campsite, bird-watching and drinking coffee in our comfy camp chairs, rather than taking on the three-hour Tafelkop 4x4 trail as we thought we might. 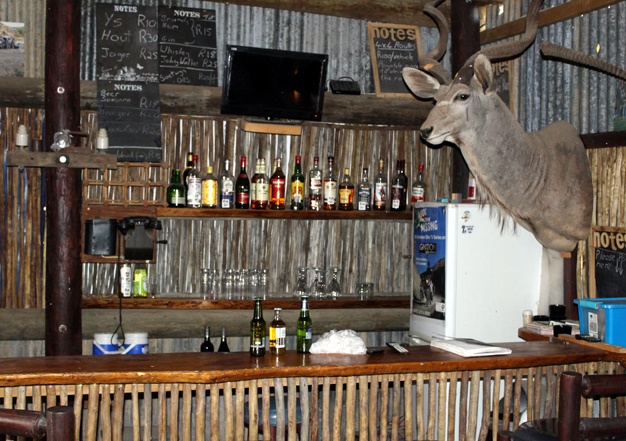 Our languid mind-set rewards us with lingering sightings of a Cape Robin, Cape Bunting, Bokmakierie and Cape Weaver, vindicating our decision to soak in our extraordinary surrounds and leave the other trails for another time — it certainly won't be a hardship to come back here.

Where it is
Directions: Best accessed off the Pastatsrivier-Matjiesfontein road (P1475) from the R356 to Sutherland (Ceres side) or via Pienaarspoort which can be found after turning left 4km north of Touws River (68km east of Gatsrivier).
GPS: S32° 53'26.8"; E20° 16'56.7"
Trail stats Length: Our there and back route was 10 km, but the others are mostly longer.
Time taken: Windpomp took us just over two hours all told, which included half an hour at the top of the mountain and several photo stops. If you'd like to do all the routes, though, allow yourself a full two days here.
Terrain: This is predominantly rocky country. While you may encounter the odd bit of sand in dry river crossings, you'll undoubtedly encounter slippery mud after rain.
Grading: The Windpomp route we travelled was predominantly Grade 1-2, with the occasional more challenging section. The other trails are all said to be Grade 3 or less
Min/Max number of vehicles: 1 to 12 on the there-and-back trails (2), no limit on circular routes (2), though.
Tyre Pressure recommended: I ran mine at 1.8 bars in front and 1.9 bars at the back.
Ground clearance: 210 mm should do it.

Cost: R100 per vehicle allows you to drive all four routes.

We live in a world where facts and fiction get blurred
In times of uncertainty you need journalism you can trust. For 14 free days, you can have access to a world of in-depth analyses, investigative journalism, top opinions and a range of features. Journalism strengthens democracy. Invest in the future today. Thereafter you will be billed R75 per month. You can cancel anytime and if you cancel within 14 days you won't be billed.
Subscribe to News24
Related Links
We configure Land Rover’s new Defender to the best spec for SA fans: here's what it costs
Next on Life
FIRST DRIVE | Is this the BMW X1 we always wanted? We drive the xDrive28i in California