• The Mahindra S11 4x4 Automatic DC Pik Up is an affordable bakkie option in the local market.

• The S11 proved to be an inconspicuous wedding carriage.

• The bakkie might have its challenges, but it made it through a treacherous 4x4 trail.

Some may say that the Mahindra S11 4x4 Automatic DC Pik Up is not the most suitable vehicle to transport a bride and groom to their wedding, but its cavernous SUV-like interior contrasts strongly with its somewhat gawky and workmanlike exterior.

And for a couple eloping on a budget, who love exploring SA's back roads and 4x4 tracks together, there may be no other bakkie currently on the SA market that offers value as the Mahindra S11 does.

Annette and I get our first taste of how our borrowed vehicle is going to handle the raft of dirt tracks we plan to throw at it in the days ahead while driving the scenic Witteberge dirt track between Touws River and Laingsburg. Although we're impressed with its planted feel, we also experienced some of its idiosyncrasies; such as the vagaries of certain overriding electronic driving aids and the sometimes non-responsive automatic gearbox, especially in 4H; a little disconcerting, but seemingly easily overcome when changing gears manually in "Tiptronic" mode.

Yes, we'd probably have preferred the lockable roll-top cover that comes standard with the fancier Karoo version (an extra R15 000) as this would have made it easier to house the honeymoon luggage and wedding accoutrements crowding the bakkie's rear seat; but, hey, there are only two of us of in this wedding party, so we are not fazed.

We make it to the Lord Milner Hotel in Matjiesfontein three hours ahead of our small chapel wedding and book into our luxurious room in the hotel's annex. The next four hours are a blur of bliss and indelibly etched memories, and after celebrating our nuptials with champagne and a room service dinner, we take a jaunt around this Victorian town; one which ends with cosy ruminations over the day's events on a double-decker bus. The next day we head to our honeymoon hideout on Sandrivier Farm - nestled in the beautiful foothills of the Klein Swartberge - just a short hop from Seweweekspoort. It's here we plan to test the Mahindra S11's off-road prowess by pitting it against a challenging Grade 3 4x4 trail - the there-and-back mountain pass that is the Elandskloof 4x4 track.

Its history is fascinating. Part of the pioneering Basson family, a member of which was the miller attached to the old mill near our cottage, grew wheat in the Elandskloof in the early days. At first, their crops were carried out of the kloof by donkeys, but when output increased, they needed to get their produce out of the valley via more efficient and voluminous methods - the need for a proper road was born.

In the early 1900s, the task of building this 4km pass fell to Tom Zimba, a farmworker whose stone wall work was apparently legendary in these parts. And with little more than a pick, shovel and wheelbarrow, this visionary man created a pass that even Thomas Bain would have been proud of. I'm thinking of this as we start to ascend the rocky and, in parts, dramatically cambered pass and see evidence of Zimba's remarkable stone wall handiwork that support the precipitous bends hugging the mountainside ahead.

The first couple of kilometres of the trail (it starts just after the farm's pretty campsite) was relatively easy, more Grade 1-2 than the overall Grade 3 rating for the trail. But there were still one or two axle-twisting sections that got our attention as we burbled our way up the flower-covered foothills before the start of the Elandskloof Pass proper.

I always select low range early on. It's safer as it's clearly dangerous to stop in the middle of a tough obstacle and fiddle with gears and dials, thereby losing traction and momentum when you need it most. The Mahindra's ultra-low first gear makes you feel like you could climb a 45° slope with ease, but I was less impressed with the mechanical differential lock on the rear axle when the vehicle's wheels spun on a few occasions.

While I'm talking about the bakkie's low-range system, it's perhaps pertinent to list another small bugbear. The selector knob does not require you to depress it before putting it into low-range from 4H, something which could prove injurious to the gearbox should you slip it into 4L erroneously while on the move. But as we grind our way to the top of this thrilling and challenging pass, I'm pleasantly surprised at how effortlessly the bakkie's relatively low minimum ground clearance (210mm) doesn't cause a single murmur from the mostly unprotected undercarriage. Equally impressive is the more than ample power from the proven m-Hawk, 2.2-litre turbocharged diesel engine. On paper, its 103kW output and 320Nm of torque won't blow many anoraks' hair back, but for daily driving and off-roading, I never found it wanting. 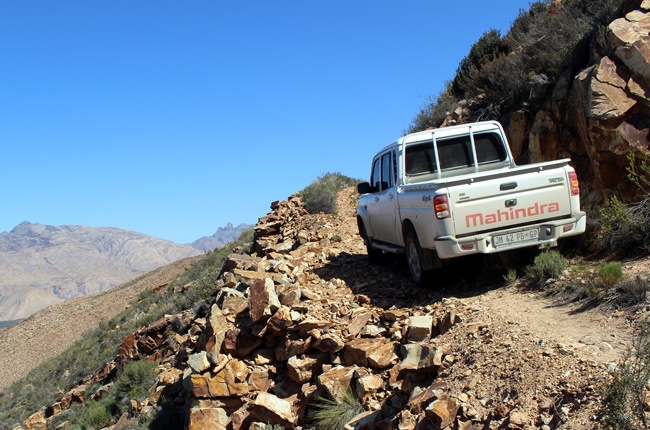 When we talked to our host, Fritz Hunlun, before setting out on this 4x4 trail, he and his daughter suggested we drive to the top, appreciate the view and come back down again. But when we get there, my curiosity is piqued as to whether our transport will make it down the seemingly lesser maintained track into Elandskloof itself, some 1.5 km distance.

Within the first 100 metres, I'm doing some pre-emptive rock moving. Still, we ease through the first trench obstacle fairly easily. Yet, when a steeply cambered section presents itself about 200-metres on, my bravado falters, and I ask my brand new wife to guide me over the challenging domed and rocky section.

It's here where the bakkie's precarious-feeling lean angle is emphasised by a sheer drop off in the same direction. It's also not helpful to my confidence when the S11's comparatively low break-over grade (18°) flashes through my memory banks before I engage this problematic section.

But with my guide assisting me and by deploying a locked-and-steady accelerator technique, we make it to the bottom of the kloof safely and catch our breath. There is, however, no high-fives yet as we need to make it through the same loose-rock obstacles back to the top.

Reenergised with braai leftovers (the lamb chops available here are the best we've tasted) and a Red Bull, we settle in for the rocky ascent. Using second gear (low-range), and a combination of momentum and careful line selection, we hip-hop up the scree slope and are rather pleased with ourselves and the bakkie's performance when we get to the top. Trail stats:
It's a 14 km long, there-and-back trail with a grading of 3. Time taken: It took us about 2.5 hours, but allow 3 hours to have a picnic at the top.

Terrain: A little sand and gravel, but mostly loose rock and rutted tracks with some challenging dongas and steeply cambered sections.
Tyre Pressure recommended: I ran ours at 1.8 bars in front and 1.9 bars at the back.
Ground clearance: A minimum of 210mm is recommended. Contact: Jonel Hunlun on 076 276 2864 ; email: info@seweweekspoort.co.za or visit their website.
Costs: Rustic self-catering accommodation in the Sandrivier Cottage at R250 per person per night (three nights or longer carry a discount) or camping at the Op-die-plaas campsite at R125 p.p.p.n

We live in a world where facts and fiction get blurred
In times of uncertainty you need journalism you can trust. For 14 free days, you can have access to a world of in-depth analyses, investigative journalism, top opinions and a range of features. Journalism strengthens democracy. Invest in the future today. Thereafter you will be billed R75 per month. You can cancel anytime and if you cancel within 14 days you won't be billed.
Subscribe to News24
Related Links
RoadTrip | Visiting the Moordenaars Karoo and learning 'Indian history' in Mahindra's Pik Up
It may be left-field, but the Mahindra Pik Up makes sense in our bakkie-mad country
Next on Life
WATCH | VW ups ante with all-new Amarok, but will SA bakkie lovers find favour? We drive it