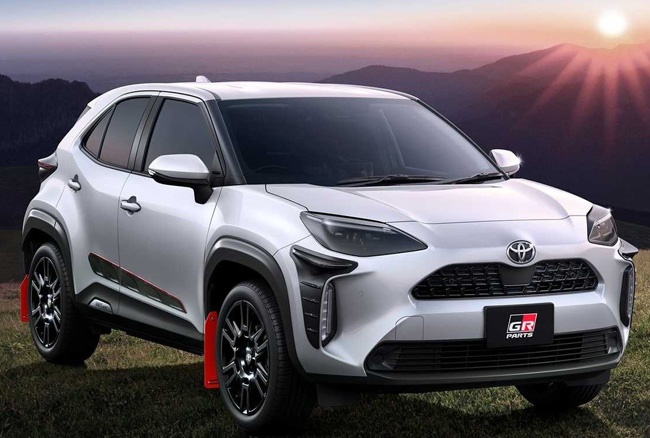 • The Yaris GR Sport has become an instant modern classic.
• Yaris Cross will become available with some Gazoo motorsport-inspired bits.
• Mods are more aesthetic than based on performance.
• For more motoring stories, go to www.Wheels24.co.za.

One of the most exciting Toyota's in memory was the original Toyota Yaris GR Sport. This limited-edition hot hatch proved that Toyota was capable of delivering excitement and driver involvement of an epic scale, in a very small package.

The Yaris GR Sport has become an instant modern classic, and much is expected from Toyota's second-generation version, which is turbocharged instead of supercharged. Although hot hatches have a keen following, the market for compact family performance cars has changed a great deal under the influence of crossovers.

Few car companies are as attuned to trend, like Toyota. It applies exhaustive market research and benchmarking to any new product development. But even the Japanese automotive giant can no longer ignore the transition from hatchbacks to crossovers.

Would you like to see this sporty compact SUV available in SA? Please email us your thoughts about the Yaris Cross GR Sport.

Keen to retain its traditional hatchback customers, Toyota will be producing more crossovers in future. One of those product evolutions concerns the Yaris Cross, which adds 30mm of ride height to the standard Toyota compact hatch platform.

As part of Toyota's expanding range of GR Sport offerings, it has been confirmed that the Yaris Cross will become available with some Gazoo motorsport-inspired bits.

The first global market to receive the Yaris Cross is Japan, where the new crossover has gone on sale in September. In an attempt to gain some marketing traction, Toyota is offering a Gazoo package for its new Yaris Cross, in the very competitive Japanese domestic market.

If anything about 1990s JDM rally cars triggers your sentimentality, the Yaris Cross Gazoo catalogue will bring you much joy. Mud flaps matter on any off-road performance car and Toyota has equipped its Yaris Cross GR Sport with outrageous red ones. They have an aluminium grid insert too, to keep the shape true and aid aerodynamics at speed. At the rear, there are tell-tale chromed exhaust ends, revealing a system upgrade that adds some intensity to the Yaris Cross Gazoo's sound signature. It is powered by a very mild 1.5-litre three-cylinder petrol-hybrid engine, good for only 85kW – so don't expect anything like the performance on offer from Toyota's Yaris GR Sport hatchbacks.

Few could have imagined that Toyota would ever transform its Yaris hatchback into an all-time great hot hatch with the GR Sport version. Although this Gazoo package does not enhance the Yaris Cross driving experience, it makes for a crossover of charming appearance.

In time, there is always the possibility that a GR Sport version could happen, making the most of Toyota's latest Yaris platform and the Cross version's greater ground clearance.

We live in a world where facts and fiction get blurred
In times of uncertainty you need journalism you can trust. For 14 free days, you can have access to a world of in-depth analyses, investigative journalism, top opinions and a range of features. Journalism strengthens democracy. Invest in the future today. Thereafter you will be billed R75 per month. You can cancel anytime and if you cancel within 14 days you won't be billed.
Subscribe to News24
Related Links
How Toyota's Quantum has been redesigned as a classic HiAce taxi
Why Toyota’s locally-built hybrid will be a big deal
Next on Life
Why Ford's new Ranger Raptor matters: Is this the bakkie that changes the market for SA?