Launched locally in 2018, the Mercedes-Benz X-Class is perhaps one of Mercedes-Benz’s most daring products. The automaker took on the difficult task of playing the bakkie market and positioned its X-Class as the ‘first premium offering’.

Having had hopes for strong sales, the X-Class is not setting the charts alight. Although Mercedes-Benz South Africa does not release individual sales figures for its product range, Daimler (parent company) released its global sales figures for 2018 data, and it makes for grim reading.

Compared to the S-Class (77 000 units) and V-Class (44 000 units), the X-Class only managed to sell 16 000 units worldwide. But Mercedes still believes that there is hope for its bakkie as the brand invited international media to Albania to experience the V6 models in some of the harshest conditions on the planet.

Could the X-Class redeem itself and prove that it can be that ‘premium bakkie’? Or is it too little, too late for the one-tonner to reclaim a piece of the bakkie pie? 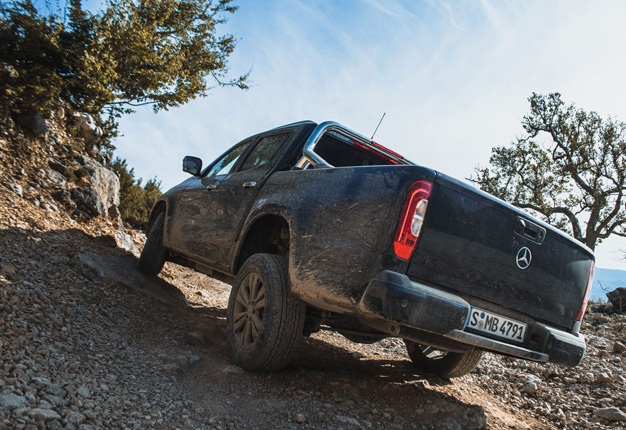 The X-Class is fitted with Mercedes-Benz’s 4Matic all-wheel-drive system that permanently sends drive to all four wheels. In the driving mode selector, drivers can also opt to engage ‘Off-Road’ mode, which alters throttle and engine sensitivity for application is arduous conditions.

This came in handy when, on the first day of the three-day trip, the convoy ascended upon the mountains East of Tirana, Albania’s capital city. At first, the mountain showed its beautiful side and treated everyone to its splendour, but everything soon turned on its head when a thunderstorm broke out. This necessitated the usage of the aforementioned driving mode to combat the tricky conditions. As the rain beat down on the convoy, the speed we traveled at soon fell below 20km/h and was positioning the bakkie correctly the only thing that mattered.

Going around bends while the gravel road is steadily falling and breaking away, was tedious and stressful. But the X-Class help up its end of the bargain by soldiering on and not putting a tyre wrong. The group of five X-Classes made it out of the mountain, but the conditions brought out the best in the bakkie when the cards were stacked against it. On the King’s Road

The next day, following a night of torrential downpours, the convoy again made their way to the mountain. This time to drive a road one of Albania’s former kings used to travel. It’s a bad road; deteriorating over the years to the state it’s in today. Rocks and boulders lie scattered across it, and only vehicles with proper off-road prowess should drive here. Thankfully, the X-Class is fitted with 222mm ground clearance.

Mercedes-Benz thought it reasonable to bring the X-Class here, and of course, the off-roaders in attendance would not decline. Going down a steep incline, drivers engage DSR (Downhill Speed Regulation). When the 4x4 system is flicked into 4High, DSR will set an automatic speed of 8km/h. Foot off the accelerator, the bakkie will maintain this speed. Drivers can increase it (though acceleration is slow, obviously), but lift off the throttle and the bakkie will revert to 8km/h quite aggressively. In 4Low, DSR will set the speed to 5km/h. (Remember, DSR needs to be activated for these speeds to be accessed.)

We descend the rocky King’s Road at 8km/h, allowing the X-Class to do its own thing. The only task up to the driver is to position the tyres correctly and to avoid any sharp objects. In this case, rocks. Deactivating DSR is done by simply pressing a button and can drivers then opt to tackle off-road tracks at their peril. Luckily, Mercedes-Benz did not allow us to drive on gravel only. Following the mountainous conditions, the convoy made its way to Albania’s tarred roads. Though road rules are virtually non-existent to the locals, the highways offered enough for the X-Class to unleash all its power.

The turbocharged 3.0-litre V6 diesel engine has 190kW and 550Nm available to its disposal and is only a dab of the throttle needed to release all of it. Set the driving mode to ‘Sport’, and the V6 is eager to get off the line. The throttle becomes sensitive, all of the 550Nm is biting at the bit at 1400rpm, and the seven-speed automatic gearbox is ready to cog over in a matter of moments. Though Media didn’t chase top speeds, the thrust from the offset is tangible and addictive. Steering, too, has a nice feel to it and does enough to make you forget you’re driving a bakkie for a brief moment.

On the mountain, fuel consumption turned around the 20-litres/100km mark, but on the open road it was cut by almost 50%. Whichever way we look at the X-Class, Mercedes-Benz has to be commended for taking such a massive leap to produce this bakkie. Though it shares plenty of bits with the Nissan Navara, the X-Class does have its own personality and space in the market; especially the 3.0-litre model.

Despite some media outlets calling for the bakkie to be axed, Mercedes-Benz will continue producing the X-Class and will it remain a part of its model line-up for the foreseeable future. And now that we've been reminded of just how capable the X-Class is, it shouldn't come as too much of a surprise to see the bakkie survive.

We live in a world where facts and fiction get blurred
In times of uncertainty you need journalism you can trust. For only R75 per month, you have access to a world of in-depth analyses, investigative journalism, top opinions and a range of features. Journalism strengthens democracy. Invest in the future today.
Subscribe to News24
Related Links
SEE: World's first premium bakkie - just how many X-Class models were sold in 2018?
V6-powered X-Class launched... check out the most powerful double-cab bakkies in SA
Next on Wheels24
Volvo and Google team up for new infotainment system in upcoming XC60