Hyundai MD Stanley Anderson admitted that, a couple of years ago, the local automaker was battling to move hundreds of 1.6-litre TGDI Tucson petrol models from its showroom floors. They then did some homework and found a "factory" kit which could be fitted to said models.

The idea was a hit and Hyundai then sold a total of 516 units: 374 Executive M/T Sport models and 142 Elite DCT versions.

Naturally, since the Tucson has recently had a bit of a makeover, the Tucson "Sport" has not been left out and it too gets, not only a new body kit, but a couple more enhancements as well, including a power boost and a 2.0-litre diesel model to the line-up.

The 1.6-litre petrol turbo delivers 150kW/300Nm. Power is fed to the front wheels through an automatic 7-speed Dual Clutch Transmission (DCT), with the option of manual shift override, while the 2.0-litre turbodiesel also delivers 150 kW/460Nm. This engine, also delivering power to the front wheels, is coupled with an 8-speed automatic transmission which also offers a manual shift option.

The exterior has some minor nip and tucks, but the new kit most certainly looks even more aggressive than before. The front end seems to have an additional or extended lip on the body, and the rear no longer looks as curvaceous as it used to be, and is now more squat on the ground. 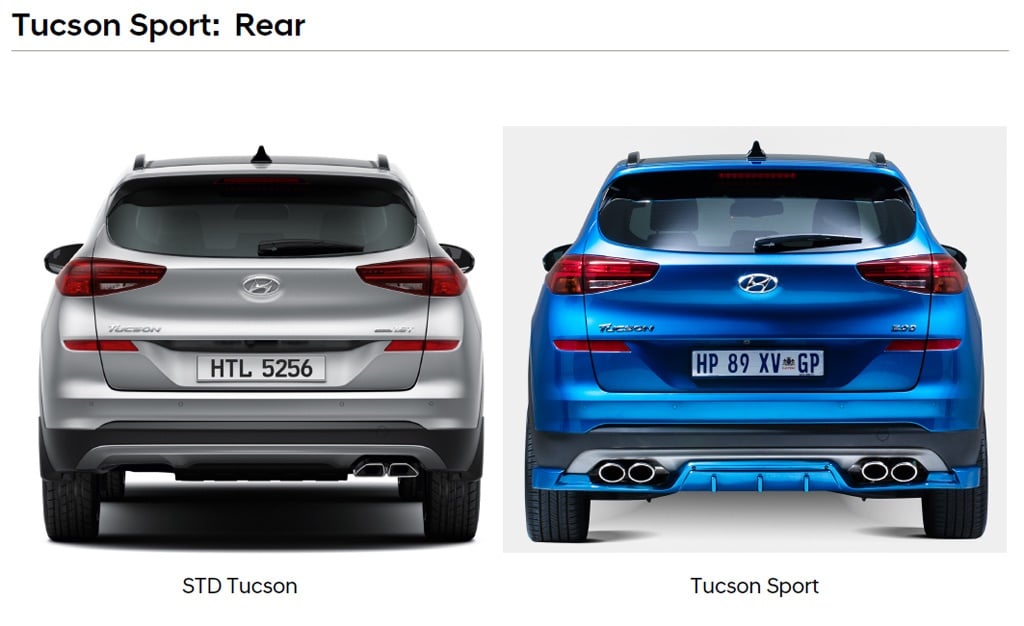 Hyundai has chosen the Elite spec for this model which has a full leather interior. Other standard goodies include: Wheels24's Janine Van der Post says: During the launch, we sampled a scenic route with some lovely, long stretches of twisty roads en route to Killarney International Circuit, where we do some hot laps in each derivative.

Both the 1.6-litre petrol and the 2.0-litre turbodiesel are a boon to drive, and you can most certainly feel the power boost of 150kW in each. If I had to choose, I would pick the latter diesel version, for fuel consumption reasons, and because of the 460Nm (160Nm more than the petrol model).

I was curious as to why Hyundai would want to showcase a rather large vehicle like this on a racetrack, but I was pleasantly surprised when the Tucson Sport was a show-off and strutted its stuff like it belonged there. It sits very comfortably in corners, and despite some turbo lag, once it gets going off the line,acceleration picks up as you go.

It's a good-looking kit and adds loads of street cred to the Tucson, making it look like a resident bully when it really isn't. But none of that matters. From the journey this car has taken as the boxy, mundane-looking previous Tucson in former years, to the classy ix35, and back to the Tucson nameplate, the Sport version deserves its menacing presence on the road as the tough guy you shouldn't mess with.

The side skirting seems to be more pronounced, as well as refreshed 19" black alloys.

Hyundai says the exhaust acoustics have been improved too, while other convenience goods include a push start button, power windows right round, and a three-angle reclining rear seats. Both models include a panoramic glass roof, and its infotainment system includes Apple Carplay and Android connectivity.

Leigh-Ann Londt says: The face-lift Tuscon Sport is such a comfortable, yet fun family vehicle. The new front with its lip, side skirts, larger 19-inch black wheels and the double exhaust setup adds a sporty look to this model.

"Personally I found the petrol model to be more responsive and you can feel the cars powers vibrate through the exhausts, compared to the diesel version.

We live in a world where facts and fiction get blurred
In times of uncertainty you need journalism you can trust. For only R75 per month, you have access to a world of in-depth analyses, investigative journalism, top opinions and a range of features. Journalism strengthens democracy. Invest in the future today.
Subscribe to News24
Related Links
Hyundai SA refreshes Tucson Sport: Design tweaks, power boost and new diesel engine
Hyundai records biggest profit gain in seven years
Next on Wheels24
Order books now open: Volkswagen's electric ID.4 to go on sale in these markets