Toyota does not really require a special edition of its 70-Series Land Cruiser.

These vehicles sell to customers who are not impressed by marketing campaigns or accessories. They know what they want because it works.

Land Cruiser 70s have not changed much over the decades and they remain popular and respected because of a fundamental toughness and robustness: punishing to drive as a daily commuter, but peerless in truly punishing off-road terrain.

READ | Is this the best Land Cruiser yet? Toyota SA announces Namib edition - built and engineered to conquer

Despite the Land Cruiser 70-Series double-cab’s strong market demand, Toyota has finally built a special Namib edition for hose most adventurous of its customers. The Land Cruiser 79’s greatest strength has also always been its one weakness: capability at the sacrifice of comfort. These double-cab bakkies ride on a very rudimentary, yet overbuilt, platform. Solid axles at both ends, with a combination of coils up front and leaf springs designed to carry a lot of weight at the rear, providing very little ride comfort.

With the Namib edition, Toyota have added an aftermarket suspension kit which adds ride height and greater shock absorber damping volume. The result is that a Namib edition might roll a bit more in corners, but it also has notably better on-road ride quality.

No Land Cruiser is built for thousands of tarmac kilometres and it is off-road that the Namib edition 79 shows its potential. In a world where most off-road vehicles now rely on complicated traction control algorithms and air-suspension to gain traction, the Namib edition is almost crudely mechanical.

There is no traction control, hill descent control and any other driver aid. You use a combination of judgement, gears, throttle and steering to find your way over obstacles. 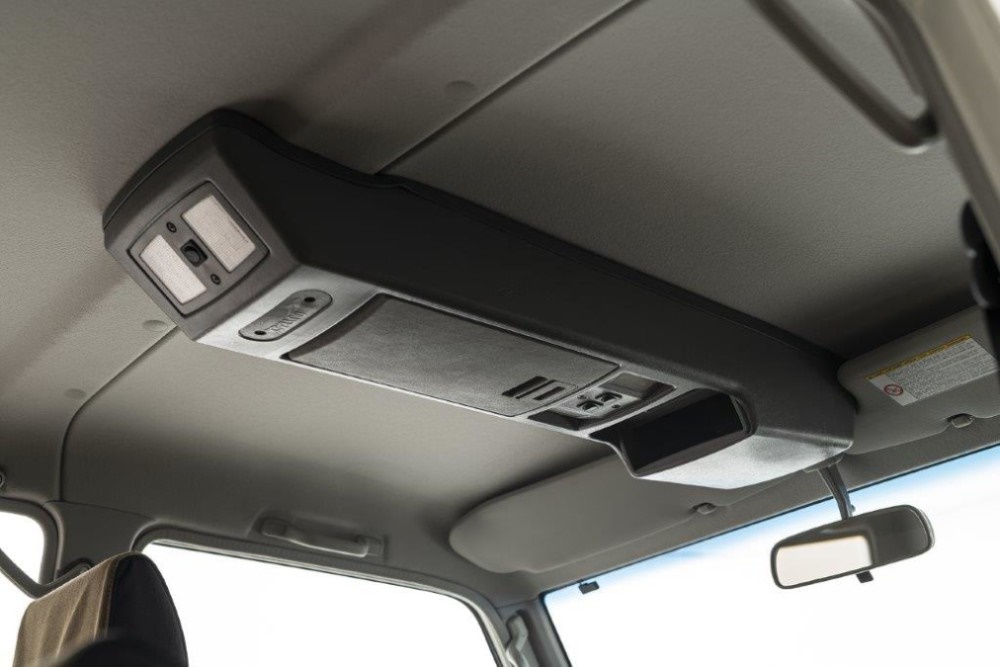 If you suspect that traction might be an issue, there are three differential locks to engage, although you’ll hardly ever require more than one locker at a time. With its huge Cooper off-road tyres the Namib edition rolls over challenging terrain with supreme confidence.

These Discoverer S/T Maxx tyres have 7% more air volume than the standard Land Cruiser specification rubber and that means a greater margin for deflation, if you need to gain traction in dune terrain.

The five-speed manual gearbox might have a very languid shift action, compared to most other vehicles, but its low-range gearing is particularly powerful.

With the centre differential locked and the main gearbox in third gear (low-range), the Namib keeps cruising on long after most other double-cab 4x4 bakkies have been forced to abandon making a trail in very challenging terrain.

With its Namib edition, Toyota have finally harvested the potential that most overlanders and adventurers have always known the 79 double-cab V8 to have. The suspension upgrades have made it comfier on-road and absolutely failproof off-road. This is truly a double-cab bakkie where you can crush terrain at speed, and not be afraid of suspension linkages bending or a half shaft failing.

The Namib’s cabin upgrades are also most welcome. If you have ever been on a two-week off-road exploration journey, you’ll know that the cab becomes an office, planning room and at times: impromptu sleeping quarters.

With tough seat covers there is no longer concern about scuffing the Land Cruiser’s trim to ruin, as you frequently get in and out, with a Leatherman tool fixed to your belt.

The air-conditioning has been rerouted to cool the centre-console box, which is crucial when transporting fluids or medicine with you in off-road conditions.

There is also improved roof console LED cabin lighting, which makes route planning a lot easier. It is especially handy when you have to deal with officialdom at night, at a roadblock in the middle of nowhere, and require quality lighting to complete a form or sort documentation.

At nearly R900 000, the Land Cruiser Namib edition isn’t cheap, but it does offer tremendous value. You get the only double-cab bakkie with a V8 turbodiesel engine and three differential locks, and all the aftermarket Safari vehicle upgrades you can imagine.

It is worth remembering that the average Land Cruiser bakkie ownership experience is measured in decades, instead of years. Amortise the purchase cost by the quality of adventuring you can journey with this Namib edition, and it is quite a bargain.

We live in a world where facts and fiction get blurred
In times of uncertainty you need journalism you can trust. For 14 free days, you can have access to a world of in-depth analyses, investigative journalism, top opinions and a range of features. Journalism strengthens democracy. Invest in the future today. Thereafter you will be billed R75 per month. You can cancel anytime and if you cancel within 14 days you won't be billed.
Subscribe to News24
Related Links
Is this the best Land Cruiser yet? Toyota SA announces Namib edition - built and engineered to...
Best-selling luxury SUVs in SA: Land Cruiser 200, new X3 prove popular in March
Next on Wheels24
FIRST DRIVE | Watch out, Hilux! Ford's new Ranger likely to turn SA's bakkie game on its head