• The Honda Jazz is an important model in the automaker's lineup.

• Honda and Isuzu joined ventures and created the Honda MU-X.

The Honda Jazz has been a remarkably consistent part of the company's product portfolio since 2001.

Utterly reliable and with a hugely roomy cabin, it was the family hatchback most recommend by motoring media for years.

An interesting backstory is that the hatchback model range most South Africans are familiar with is not the original configuration for Honda's Jazz. The company's first Jazz was something that would have appealed to a more adventurous customer profile, than retirees or parents, seeking a reliable budget family car.

Why Honda went all-in with 'other' brands' SUVs

Toyota's Rav4 was an unexpected success, triggering panic amongst the company's Japanese rivals.

It was Honda, especially, which felt very exposed to Toyota building an SUV empire. Honda has no counter to Land Cruiser and the Hilux-based SUVs that Toyota was increasingly turning a tidy profit on in the 1990s. 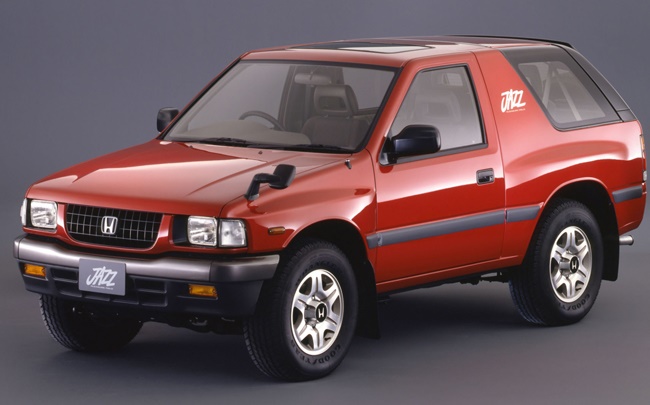 Honda knew the Rav4 would arrive in the market in 1994 and was desperate to show some ability to counter Toyota's surging SUV offering. Its strategy in this regard was very peculiar, leveraging very unusual partnerships with other automakers.

Some masterful corporate negotiating allowed Honda access to Land Rover's original Discovery platform and also the first-generation Isuzu MU-X, based on the KB bakkie platform. By rebadging these two rugged SUVs as Hondas, the company thought it had an adequate counter in the Japanese domestic market.

Jazz by name, KB by nature

The rebranded Honda MU-X was sold as a Jazz, redating the current compact hatchback nameplate by quite a few years. Although it hardly did stellar volumes in its time on sale (1993-1996), there was nothing mechanically lacking with this rugged Honda Jazz.

Japan is not a motoring landscape given to large SUVs, with narrow streets and ridiculously challenging parking. Honda's product team for the Jazz SUVs cleverly optioned on a three-door configuration, which was Isuzu's slightly shorter first-generation MU-X.

Powering the Honda Jazz 4x4 was Isuzu's 4JG2 turbodiesel engine. It displaced 3 litres among four cylinders and produced 88kW and 270Nm. Those outputs might seem underwhelming now, but in 1993 they were reasonably powerful for a 3-litre engine in a rugged SUV application.

Aware that driving convenience was crucial, the Honda Jazz was configured with a four-speed automatic transmission.

Perhaps the most impressive thing about Honda's Jazz SUV was its enormous range of accessories. However, owners were unlikely to navigate anything approaching a technical off-road route in their three-door Jazz, that did not prevent Honda from offering every conceivable adventure accessory. Although it was purely a badge-engineered project, this Honda Jazz 4x4 is a fascinating historical reference point, especially for South African fans of the Isuzu brand.

We live in a world where facts and fiction get blurred
In times of uncertainty you need journalism you can trust. For 14 free days, you can have access to a world of in-depth analyses, investigative journalism, top opinions and a range of features. Journalism strengthens democracy. Invest in the future today. Thereafter you will be billed R75 per month. You can cancel anytime and if you cancel within 14 days you won't be billed.
Subscribe to News24
Related Links
Why Honda's new Civic Type R's latest lap record at Suzuka is such a big deal
REVIEW | Lockdown leaves room for reflection as Honda Jazz Sport quietly impresses
Next on Life
DRIVEN | Why the all-new Ford Everest has the Toyota Prado in its sights and not Fortuner