• Toyota has unveiled its eighth-generation Hilux updates in Australia.

• The two new bakkies are called the Hilux Rugged X and Rogue.

• These Oz versions provide some interesting clues to what South African bakkie buyers could expect.

Any update to the eighth-generation Hilux is of huge significance to South African bakkie drivers and customers.

Demand for the country's most popular vehicle remains unquestionably strong. With the promise of a more powerful 2.8-litre turbodiesel engine option, Hilux is sure to leverage its advantage in the local market further.

Although the local range specification and price is yet to be finalised, Australia has just received their first allocation of the updated Hilux – with some interesting clues to what South African bakkie buyers could expect. Two of the most striking derivatives within the new Toyota Hilux range, are the Rugged X and Rogue. Unlike South Africa, the Dakar is not a premium Hilux trim level in Australia.

A bolder grille design is the crucial differentiating feature of Toyota's new Hilux range. With the Rogue derivative, Toyota's industrial designers have attempted to make the updated Hilux looks even closer in type to the brand's massive Tundra bakkie, which is only available in the North American market.

Would you be interested in seeing these Hilux versions available in SA? Please email us your thoughts.

There are also fender extensions, which flow into the front bumper, creating a visual effect of new Hilux looking even broader and more purposeful. These plastic fender extensions are not merely a styling trinket to make the bakkie appear larger; they do save the bodywork by absorbing any stone chip scuffs or slow-speed off-road driving abrasions when working through very technical terrain. 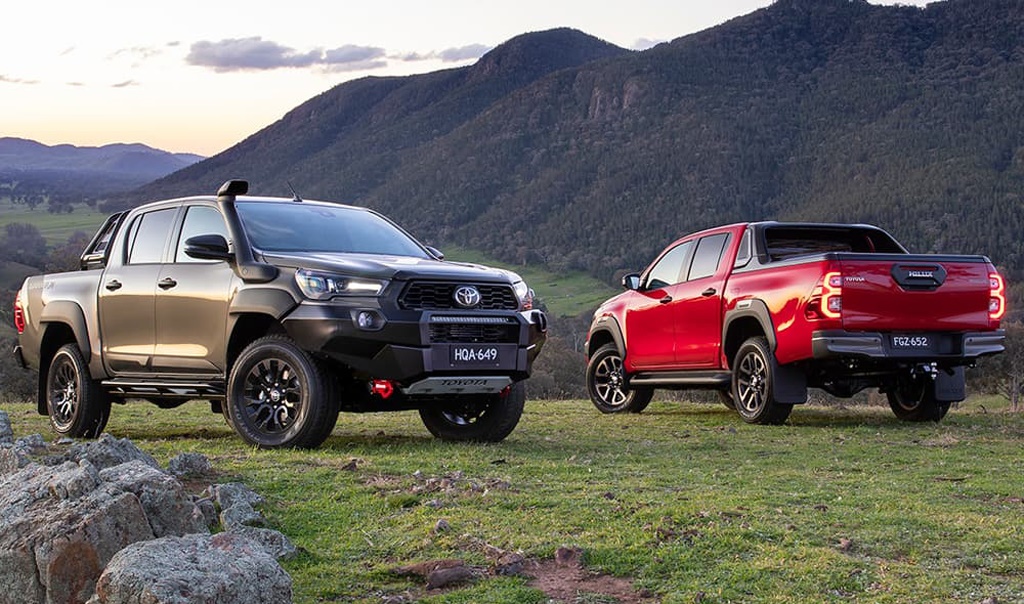 By far the more impressive addition to Toyota's new Hilux range, is Rugged X. This variant is equipped for challenging off-road work and can be described as a genuine junior Land Cruiser 79 alternative.

Dominating the Rugged X's front is a reshaped bumper section, which allows for easier access to its heavy-duty recovery point shackles. If you have ever had the unpleasant task of having to crawl under a bumper, on a blazing sand or rock surface, you'll appreciate the more convenient recovery point access.

The Rugged X's bumper is also of a much slimmer profile than other Hilux bakkies, which should give it slightly superior approach angle geometry, for easier obstacle clearance in severe off-road terrain.

To allow for larger volume tyres, providing better traction and flotation off-road, the Rugged X is equipped with 17-inch wheels. Framing those off-road specification wheels and tyres, are oversized fender extensions. Not only do these fender upgrades protect the Rugged X bodywork, in a similar function to the Hilux Rogue's modified fenders, but they should allow for reduced tyre rub in extreme cross-axle terrain.

Toyota completes the Rugged X's upgrades with a snorkel, enabling it to cross water obstacles safely. Hilux drivers who operate their bakkies in harshly dry and dusty environments will also value the presence of that snorkel, as it allows for cleaner and cooler filtered air to be ported into the engine bay.

We live in a world where facts and fiction get blurred
In times of uncertainty you need journalism you can trust. For 14 free days, you can have access to a world of in-depth analyses, investigative journalism, top opinions and a range of features. Journalism strengthens democracy. Invest in the future today. Thereafter you will be billed R75 per month. You can cancel anytime and if you cancel within 14 days you won't be billed.
Subscribe to News24
Related Links
Meet the man who made the Toyota Hilux bakkie so good
Toyota's new SA-bound Hilux has a lot more power
Next on Life
WATCH | VW ups ante with all-new Amarok, but will SA bakkie lovers find favour? We drive it