Need a new SUV? Why Isuzu's mu-X is an ideal family vehicle The holiday season is usually a time for beach, family and relaxation. It is also a time for road trips to reach your destination, and a vehicle that's filled to the brim with family; mom, dad, siblings, grandparents, your partner and kit.

Some families may not be as extreme as the given example but for most, a vehicle that can transport as many people as possible is a boon. So what should you do when you need to transport everyone and the kitchen sink?

READ: It's only the beginning: Here's why Isuzu's mu-X is punching well above its weight

It’s then that a vehicle such as the Isuzu mu-X is capable of meeting those needs. It’s large, has ample space, and an engine that will not look the other way when the going gets tough.

Over the recent December 2018 holidays, I experienced the mu-X 4WD during an extended test and was it a good chance to see what this SUV is really capable of. And after 4000km, I've learned a lot about Isuzu's new SUV.

One of the Isuzu mu-X’s biggest attributes is the vast amount of space it has. Room enough for a rugby (sevens)  team. Climb inside and occupants have more than enough space to sit comfortably; there's no uncomfortable squeezing together and there is enough leg- and headroom.

Should it happen that you need to transport more than five people, two extra seats are located in the boot; Simply pull a tether and there the seats are released. When these seats are not in use, you have a loading capacity of 617L to your disposal. And if you flatten the second row of seats, that space increases substantially. The (fifth) door to the loading bay doesn’t open wide enough to my liking, but you’ll easily manage to get all your kit in.

The mu-X comes standard with a tow hitch, so you needn't worry about getting your trailer or boat to your destination.

The Isuzu mu-X is the successor to the Chevrolet Trailblazer; an SUV that was also based on the Isuzu KB (the latter is nowadays known as the D-Max).

The exterior design reminds strongly of the Trailblazer, but on the inside, Isuzu made a considerable effort to gift the SUV with its own unique design. Some technologies, such as blind-spot warning, have not been carried over from the Trailblazer, but it does very little to take away from the overall feel of the SUV. The mu-X 4WD is kitted with leather seats and the driver seat can be adjusted electronically. Aircon is standard but rear passengers can control their own airflow (the rear aircon is activated close to the driver). Keyless entry and –start is part of the package.

Added to the package is a revised centre console, more storage places, an instrument cluster with easier readouts, and electric windows all-round. You can also lock the SUV by pressing a button on the driver’s door, or a button on the fifth door.

A bit of a bother

The mu-X is powered by the same diesel engine that does duty in the D-Max bakkie. A 3.0-litre four-cylinder motor churns out 130kW and 380Nm but the latter is considerably lower than what the competition has to offer.

What is also noticeable is just how heavy on fuel the mu-X is. Regardless of the fact that it’s a 4x4, a consumption figure of around 12-litres/100km is troubling even if you're a light foot. Isuzu fitted a six-speed automatic gearbox to the vehicle but this does very little to remedy the situation.

The four-wheel drive system works very well - well done, Isuzu - and can it be activated whilst on the go. Up to a speed of 100km/h, you can turn the rotary knob between the front seats to toggle between 2H and 4H; which switches between two- and four-wheel drive. 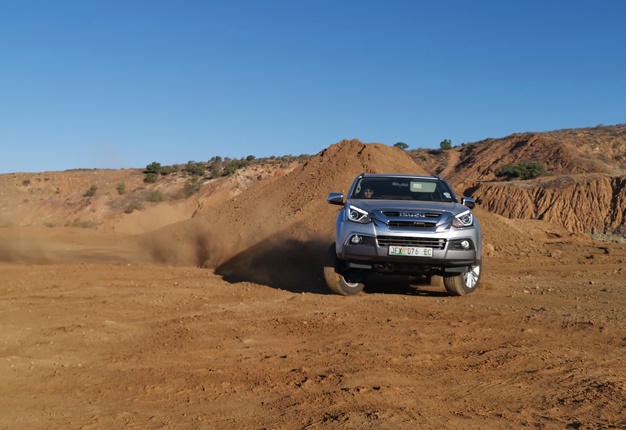 When terrain gets a bit tricky, you can bring the vehicle to a complete stop, switch to neutral and activate 4L. This will activate both low-range and the diff-lock. The vehicle will move at a much slower pace but it won’t have any issues overcoming obstacles regardless of their severity.

The suspension on the mu-X is also very good and it's far more compliant than the market leaders. Sure, the engine could do with a bit more torque and modern technologies to improve consumption, but apart from that, the SUV has no trouble chewing up the kilometres.

Following a month-long test of the Isuzu mu-X 4WD, one can formulate a more rounded opinion of the SUV. From a practical point-of-view, it’s a great vehicle that can carry both passengers and their luggage, with space left for whatever else. It has a good ground clearance and you have a commanding view of the world ahead.

Of course, the engine does have its shortcomings and it’s something Isuzu will have to work on, but the engine is one of those machines that simply doesn't know when to quit. We tend to think that Toyota builds die-hard engines, but Isuzu can be mentioned in that same company.

As a holiday vehicle the mu-X proved itself very well and can I hand the keys back with a good dose of satisfaction.