In case you were not aware, SUVs and compact crossovers have been on the rise for the last two decades. The demand for these vehicles was so immense that manufacturers have at least one such car in their product portfolio.

Volkswagen, too, is no different and does it boast with four (T-Cross, Tiguan, Tiguan AllSpace, Touareg) of these vehicles.

But it's the Tiguan that's garnered the most interest as of late because, since its global introduction in 2007, it's been on an upward trajectory that has no intention of slowing down. In 2016, the second-generation was introduced, which garnered even more success than the model preceding it. In 2017, the Tiguan AllSpace (7-seater) joined the range.

Come 2020, and Volkswagen is on the eve of showcasing its updated Tiguan to the world. The automaker is excited about the prospect of having its new SUV build forth on the success of its forebears. The path the Tiguan came along is one worth celebrating. During 2007's latter half, VW managed to sell 16 272 units, globally. Fair enough, it was only over the closing months of the year. In 2008, however, it increased exponentially to 150 416 units. This was big for Volkswagen because it proved that their market research was accurate.

But what Volkswagen perhaps did not envision was that the Tiguan would go on to become its top-selling vehicle. In 2017 and 2018, Tiguan sales stood on 770 000 and 861 000 units, respectively, which pushed global since in its 11-year existence to over five million units!

In 2019, however, the Tiguan's success grew even more, and by the end of the year, 911 000 units were sold globally! It's fair to say, then, that there’s a new sales leader in the Volkswagen stable.

Volkswagen identifies two reasons for the Tiguan's success: the global demand for compact SUVs, and serving that demand. The segment the Tiguan competes in is the largest and fastest-growing worldwide, and having two wheelbase options (normal and long) serve that need is an integral part of its success. 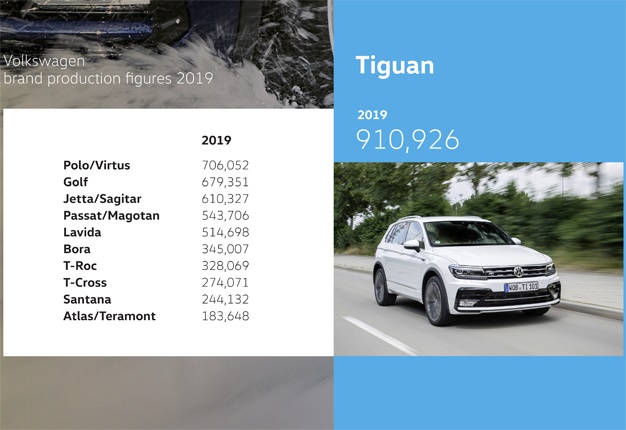 Locally, the best-selling SUV is the Toyota Fortuner. Here, the Tiguan does make the top ten list of best-selling SUVs, but its numbers are far below that of the Fortuner. But South Africa is only a part of the Tiguan's success; given that the SUV is sold in more than 80% of countries around the world.

In Europe, its success is immense. There, says Volkswagen, the Tiguan is the top-selling SUV, while globally, it's rated in third place.

Since 2007, more than six million units rolled off the production line at an average of one every 35 seconds. Over the last 13 years, VW is looking at a global production rate of 2.5 Tiguans per day. The normal Tiguan is produced in two countries - Wolfsburg (Germany) and Kaluga (Russia) - while the long-wheelbase model has its roots in Puebla (Mexico) and Shanghai (China).

Locally, the long wheelbase is more commonly known as the AllSpace. What can we expect next

Come the first quarter of 2021, the Tiguan will make its local debut, followed by the AllSpace (launch date not yet confirmed). Changes to the range will include new designs for the front and rear of the SUV, new drive systems, a new infotainment system, and a host of new driving assistance systems.

One of the big stories around the forthcoming Tiguan is that the range will feature a plug-in hybrid electric vehicle (PHEV). Initially slated for the European market, this model can drive on electric power alone for 'more than 50km'. This technology should allow the Tiguan to operate in the city without emitting any emissions or using any fuel. It remains to be seen whether or not this model will find its way to South Africa.

Volkswagen laid out its plans for 2020 earlier this year and the Tiguan should be the perfect cherry-on-top when said product offence concludes. 2020 Volkswagen Tiguan. Image: QuickPic
We live in a world where facts and fiction get blurred
In times of uncertainty you need journalism you can trust. For only R75 per month, you have access to a world of in-depth analyses, investigative journalism, top opinions and a range of features. Journalism strengthens democracy. Invest in the future today.
Subscribe to News24
Related Links
Volkswagen’s modus operandi - All the new passenger vehicles scheduled for SA in 2020
Next on Wheels24
WATCH | Next-gen Ford Ranger tested to the extreme in world's toughest conditions