• Mercedes-Benz could have dominated the compact single-cab market.

• In 1995 Mercedes-Benz had an advanced compact single-cab bakkie project, ready for final development.

• Its technology was a lot more advanced than anything else in the compact car market.

The double-cab bakkie thing did not go well for Mercedes-Benz. Its X-Class was an enormous failure, the kind of which Mercedes-Benz would ordinarily never make.

But what bakkie fans tend to forget, is that Mercedes-Benz could have absolutely dominated the compact single-cab market.

Back in the early 1990s, strategists and product planners at Mercedes-Benz realised that its portfolio needed more youthful appeal. What the company's R&D department explored, was a radical front-wheel drive concept platform, that included a compact single-cab.

Do you think this half-tonne Mercedes bakkie could have worked in SA if it went to production? Please email us your thoughts.

Four cars in one

The Vario Research Concept (VRC) was an opportunity for Mercedes-Benz engineers to experiment with the idea of a lighter, more compact vehicle configuration. It is worth remembering that A-Class did not exist when Mercedes-Benz revealed its VRC at the 1995 Geneva auto show.

What made the VRC so unique, was that it had a configurable structure, capable of transforming between station wagon, convertible, coupe or bakkie. That's correct: in 1995 Mercedes-Benz had an advanced compact single-cab bakkie project, ready for final development. 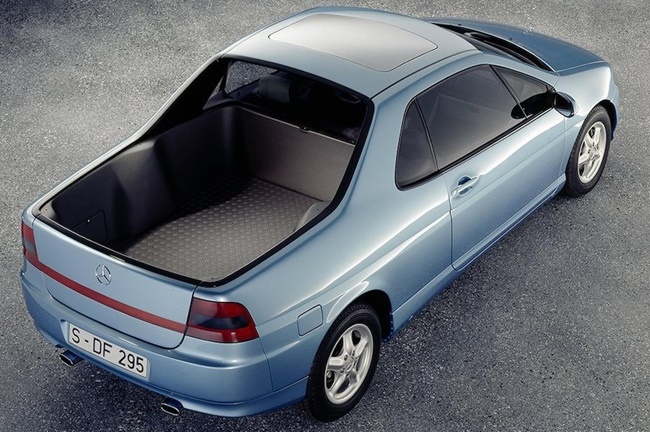 The secret to VRC's adaptability was its carbon-fibre reinforced plastic (CFRP) body panels, which were very light, but also suitably robust. This allowed the VRC to convert from being a coupe to bakkie, by simply manipulating and removing 35kg worth of bodywork.

VRC's body panel engineering was wonderfully complex. A series of servomotors helped to securely latch, release and guide the various body panels into place, reducing the burden on any human input when converting between the different configurations. Mercedes-Benz engineers also knew that most vehicle owners could not be trusted with tools and instructions, so they attempted to make the process relatively automated.

The lost potential of an A-Class single-cab

As a design, Mercedes-Benz's VRC was a foreshadowing of what A-Class would become, but its technology was a lot more advanced than anything else in the compact car market during 1995.

The VRC has active body control, something which would only launch with Mercedes-Benz's second-generation CL in 1998. Its colour instrumentation display would eventually debut in the W220 S-Class, and the rotary menu and function controller would eventually come to market in Mercedes-Benz's fifth-generation S-Class, 11 years after the VRC originally showed it in Geneva.

The VRC concept also experimented with drive-by-wire technology, for both its steering and brakes. In 1995, when direct hydraulic assistance controlled all steering systems, this was pioneering. As is so often the case with really daring design, the VRC single-cab bakkie never made it past conceptual development. This is, even more, the pity, when you consider the tidy little engines that Mercedes-Benz was busy engineering in 1995, for its forthcoming first-generation A-Class.

If the A170 CDi's turbodiesel engine was applied to VRC, Mercedes-Benz could theoretically have marketed a compact bakkie with 70kW and 180Nm, in the late 1990s. The performance and economy of such a single-cab would have been unrivalled.

Imagine if Mercedes-Benz had endured with the compact single-cab bakkie concept first seen with VRC? It would no doubt have been more enthusiastically received than the X-Class was.

Image: Mercedes-Benz Media
We live in a world where facts and fiction get blurred
In times of uncertainty you need journalism you can trust. For 14 free days, you can have access to a world of in-depth analyses, investigative journalism, top opinions and a range of features. Journalism strengthens democracy. Invest in the future today. Thereafter you will be billed R75 per month. You can cancel anytime and if you cancel within 14 days you won't be billed.
Subscribe to News24
Related Links
How Audi made the V6 Amarok bakkie possible
Now this is a bakkie! Bloemfontein-built Brandt BRV could be SA's best-kept secret
Next on Life
Why Ford's new Ranger Raptor matters: Is this the bakkie that changes the market for SA?