Image: Charlen Raymond
South Africa has been waiting for quite some time for the Ford Ranger Raptor to arrive. Once news broke that the bakkie would be making its long-awaited arrival to our market, fans and enthusiasts were enthralled with the news.

Finally, the Raptor name would be available in SA and we would for once not have to look at the US with disdain and jealousy. We’re getting our Raptor, and it’ll be built right here: engine in Port Elizabeth, assembly in Pretoria. Talk about a #ProudlySA product!

Only, the locally-produced Raptor would not be fitted with a big V8 engine. Instead, it features Ford’s brand new bi-turbo 2.0-litre diesel engine mated with Ford’s brand new 10-speed automatic gearbox.

The catch? You’d have to fork out R803 300 for it. Sacrilege? Perhaps, but the SA-built Ranger Raptor is more than just a Ranger WildTrak chugging steroids down its throat. The Ranger Raptor is fitted with a body that is much wider than the one on the standard models. And it should be because the best Ranger yet can’t be underestimated when you look at it. To put the Raptor’s size into perspective, here’s how it sizes up against the Ranger WildTrak 4x4 automatic.

In length, the Raptor is slightly longer at 5398mm (WildTrak: 5354mm), and just a few millimeters higher at 1873mm (WildTrak: 1851mm). The most apparent difference between the two bakkies has to be the width. Excluding the side mirrors, the Raptor bests the WildTrak 2028mm to 1860mm.

The addition of the wheel arches adds a menacing presence to the bakkie that makes it stand out. Underneath the arches are massive tyres and a competent suspension setup. In addition to the Raptor’s widened body, it also features a revised architecture. The three most notable changes to the Raptor over the WildTrak are bigger tyres, off-road specific shocks from Fox, and a raised ground clearance.

The 17-inch 285/70 tyres not only add to the bakkie’s visual appeal, but it also aids driveability in several circumstances. On national roads, the tyres provide a supple ride quality with virtually no tyre-on-road noises entering the cabin. However, these rubbers are better suited to off-road conditions and they do lose grip when entering a non-demanding corner on a tar road with speed resulting in understeer. Fair enough, it’s a bakkie, but a standard Ranger’s tyres are a better fit to everyday use.

Undoubtedly the surprise, and perhaps most significant attribute to the Ranger Raptor has to be its Fox-derived shocks. These units, developed specifically for application in this bakkie, absorb undulations and road imperfections with aplomb and ease. In off-road conditions, it’s easier to tackle the rough stuff and other obstructions, while in the city the speed bump in your area will do little to deter you. Conducting a little experiment in my speedbump-ridden neighbourhood, the Ranger Raptor dealt with speed breakers from all sizes. At 40-, 50-, and 60km/h the Raptor cruised over each one; highlighting the benefit of the Fox suspension.

The Ranger Raptor’s ground clearance has been increased by 46mm to 283mm over the WildTrak’s 237mm. Not only does this have a definite impact on off-road confidence, but it garners assurance that you can venture almost anywhere with your beefed-up bakkie. The raised ride height, together with the bigger wheels and uprated suspension, makes the Ranger Raptor one of the most focused bakkies on sale in South Africa today.

In the driver’s seat

Making its intent of not being your ordinary bakkie clear, the Ranger Raptor has got a few bits and pieces to make you realise that. Clamber onto the very prominent side skirts and slip into the racing front seats. These units are decked in leather and Alcantara and have ‘Raptor’ embroidered onto them. The steering has ‘Raptor’ written on its bottom-end, while at the top there’s a red sticker to underline that racing pedigree.

The automatic gearbox does have a manual function, but drivers can’t change gears manually via the gear lever. For that, you can use the paddles behind the steering wheel. The cabin’s overall feel does exude a sense of sportivity, but not too excessively that you forget that it’s still a bakkie.

Start the Raptor up, and a quick video welcomes you to the party. Flick the gearbox into drive and be on your way. Around town, the bakkie feels pretty much like a car. Steering inputs don’t require much muscle, and the suspension helps to keep things in check. Though Ford has to be commended for fitting its new 10-speed gearbox to the bakkie, the unit is not without hiccups. In traffic, coming to a stop, the ‘box will emit some jitter when shifting back to first. Most buyers will probably not notice it; seeing that the effect thereof is so minimal.

To unleash the Ranger Raptor’s full fury, one would have to find a sandpit or long stretch of gravel. This is where the Raptor will excel and where the engine’s 157kW/500Nm can be allowed to run free. Press the ‘mode’ button on the steering wheel, engage ‘Baja’ mode, and enable the bakkie to impress. Throttle and steering inputs are more sensitive, the engine is eager to rush through its revolutions, and if you’re in rear-wheel drive the rear becomes a lot looser and fun-inspiring. Every trinket of the bakkie’s reactions inspires you to go further, to do more.

The 4x4 selector sits next to the gear lever and switching from 2High to 4H can be done while the bakkie is on the move (max. 100km/h). The system switches over seamlessly; allowing drivers to tackle that sandpit like a pro. Thinking of scaling an incline? Thanks to approach and departure angles of 32.5 and 24 degrees, respectively, you should have no problem showing off your skills (or hiding your lack thereof). 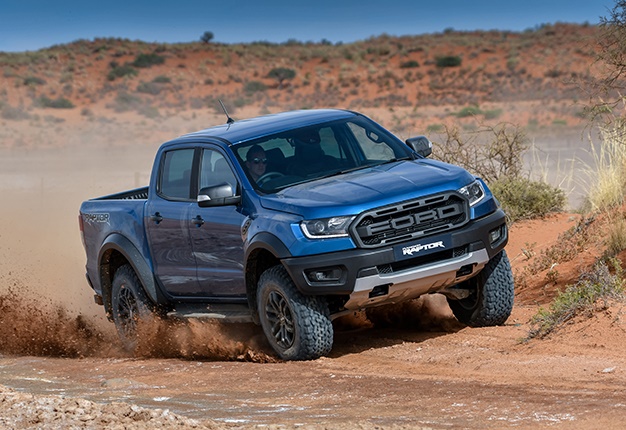 The one question that always came up was: ‘How much does it cost?’ Followed almost immediately by: ‘Is the price justifiable?’ The Ranger Raptor retails for R803 300, and justifying it will depend on your personal preference.

See, if you’re a Ford Ranger fan and you’re not too concerned with over-the-top looks and garnering a lot of attention, then a WildTrak would suit you just fine. Coming in R111 100 more affordable than the Raptor, you’d be saving some cash and will be able to enjoy most of the benefits (engine, gearbox, good ride quality, space) as the Raptor.

The Raptor is a visually appealing proposition. It was designed with the intent of being the best Ranger on-sale and there is nothing about it to suggest otherwise.

It’s a perfect fit for those who want a bit of attention, for those who are not afraid to tackle that dirt road and conquering that off-road course in the quickest possible time. The Ford Ranger Raptor is the epitome of the finest bakkie possible, and the lucky few who’ll purchase them will not regret it for a single moment.

We live in a world where facts and fiction get blurred
In times of uncertainty you need journalism you can trust. For only R75 per month, you have access to a world of in-depth analyses, investigative journalism, top opinions and a range of features. Journalism strengthens democracy. Invest in the future today.
Subscribe to News24
Related Links
Ranger Raptor, Hilux GR Sport... Epic bakkies launched in SA so far this year
Isuzu AT35, Hilux GR Sport, Ranger Raptor - Hyped-up special bakkies: Do they live up to it in SA?
Next on Wheels24
REVIEW | Toyota pulled out all the stops when penning its all-new Land Cruiser 300