• GLE range consists of eight models, including an AMG derivative.

• 'Hey Mercedes' is standard across the GLE range.

Mercedes-Benz is no stranger to the SUV game. In its current portfolio, there are five SUVs - excluding the GLA and GLB crossovers - and each range has several derivatives to choose from. The GLE line-up has seven models to choose from, with an additional 53 AMG model headlining it.

Our test unit, the GLE 300d 4Matic AMG Line, is the second model in the GLE range, beginning life at R1 417 080 - before options. It's a fair bit of money, but you are treated to an SUV that impresses on several fronts. Big and bulky it may be, but it is a wholly impressive machine. When gleaning your eyes over the GLE, you might think that this is a heavy machine. And you'd be right because this SUV has a kerb weight of 2165kg. That's a whole lot heavier than many of the more common, and more affordable, SUVs on the road. The sheer size of the SUV is explicitly found all around it.

Face the front, and the huge grille confronts you with its massive air intakes. In the middle, the badge takes prominence with a single bar running diagonally across it. The clear giveaway that this is the AMG Line is the pattern on the grille, reserved for these types of models. Below the headlights are two openings. Though they are enclosed and not feeding any air to the brakes, the two chrome strips add a nice touch to the design.

At the rear, a chrome bar runs across the rear bumper and houses the dual exhaust outlets. Our vehicle is specified with the optional 20-inch tyres; rounding off the package with aplomb. There is ample space for five passengers inside the GLE's cabin; seven if you opt for the extra two seats. Occupants are treated to plenty of comfort, and long journeys do not become a tiresome exercise. The GLE's cabin is roomy thanks to its overall dimensions. At over 4.9m in length and a width of 1947mm (excluding side mirrors), it is understandable why the big brute is such a sizeable vehicle.

Open the boot, and users are treated to 630L of load volume capacity. Fold the second row of seats flat and that capacity increases to 2055L. That, by any standard, is a sizeable space to utilise. Mercedes-Benz also says that this model has an unbraked towing capacity of 750kg, and 2700kg unbraked.

Other notable features include a multi-function steering wheel that is both intuitive and easy to use; operating the information display in front of the driver and the cruise control. The car is also fitted with Mercedes-Benz User Experience (MBUX), better known as 'Hey Mercedes'. 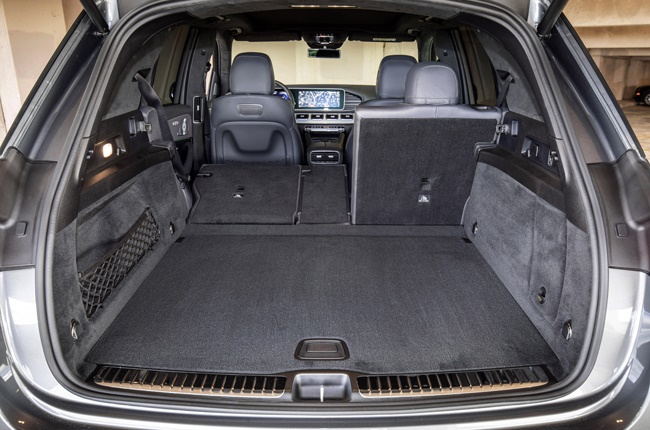 As mentioned, the GLE is a sizeable vehicle. Get moving, and you are confronted with how weighty the steering wheel feels when you execute the initial pull-away. Though not troublesome, an unaware driver could feel daunted by it. Luckily, the 'Dynamic' driving mode selector allows for the suspension and steering feel to be adjusted accordingly.

The GLE 300d implements a turbocharged 2.0-litre diesel engine that produces 180kW and 500Nm. Though it does not seem like an adequate fit, the engine feels eager to haul the SUV around. The nine-speed automatic gearbox is cogs over with ease, always finding the right gear when needed.

Our test unit was specified with the optional air suspension, which adds greater ride comfort to the GLE. Wheels24's Janine Van der Post says: "Generally, I LOVE huge SUVs despite being vertically challenged, but I have never let that come in my way when driving any vehicle.

"The GLE is bulky for sure and commands respect purely just because of its size. But, with a good toggle, I could find the perfect driving position to see over the steering wheel, and still, be relatively comfortable to pilot the gigantic ship.

"It's incredibly roomy both in the front and the rear. There is legroom for days! I had to laugh when my toddler said she could fit our dog, and all her teddies on the back seat with her (and it's a lot!).

"As we've become accustomed to Mercedes-Benz and its driver aides, and all its fancy tech, it definitely feels like you're in a cockpit, but it's relatively easy to navigate. Best you fiddle around with settings before you set on your journey.

"At first, I was taken aback by the incredibly light steering, to the point that I was almost put off by driving the SUV. I then remembered I could adjust the settings and driving modes to stiffen the suspension and thus the steering response. The steering isn't a bad thing but is akin to a sportier vehicle more than a massive SUV, and it took just a moment to adjust to that fact. I also wasn't expecting it.

"And, even though it's a large vehicle, the 2.0-litre diesel engine is surprisingly frugal even when you're using all 500Nm of torque. Mercedes claims a 7.0-litre of average fuel consumption, so even at the 8.2-litres average I had reached is still enough to leave me impressed.

"Once you're settled and get quickly get used to driving it, the GLE is a lot more nimble than you'd expect, nor is it as gigantic as I initially had thought. Overall, it's a grand vehicle, loaded with all the bells and whistles to justify its price."

The GLE 300d AMG Line is an impressive vehicle. From the way it hides its size once on the move to the well-specified cabin, it's a good package that will impress anyone. If there is a gripe, then it has to be the somewhat uninspiring dashboard. While intuitive, it is very generic to other Merc interiors. On the one hand, it creates a sense of familiarity. But on the other, one would appreciate a little something else.

Luckily, it does not detract from what the SUV offers. We live in a world where facts and fiction get blurred
In times of uncertainty you need journalism you can trust. For 14 free days, you can have access to a world of in-depth analyses, investigative journalism, top opinions and a range of features. Journalism strengthens democracy. Invest in the future today. Thereafter you will be billed R75 per month. You can cancel anytime and if you cancel within 14 days you won't be billed.
Subscribe to News24
Related Links
Tracing the AMG GT Black Series' lineage: How the range matured over the last five years
SA's Vernon Philander is an undercover petrolhead: We drive his Mercedes C63 AMG
Next on Life
UPDATE | Ford's new Ranger is about to launch in SA and turn the bakkie game on its head