• The Chequered Flag treated was given to the 2.0-litre models.

• This F-Pace's interior is decked in black and red leather.

It's been four years already since the Jaguar F-Pace made its appearance at the then-Jaguar Simola Hillclimb in 2016.

The SUV immediately drew in the attention, and it garnered a loyal following locally. The F-Pace was an important vehicle for Jaguar then, and it still plays an integral part role in the automaker's modern portfolio.

For 2020, Jaguar decided to give the F-Pace range a bit of a refresh with the introduction of a new Chequered Flag edition. Available on the 2.0-litre models only, the Chequered Flag package is added to all three diesel-powered models and the sole petrol unit.

Our test unit was the 25d AWD, powered by a 2.0-litre twin-turbo diesel engine.

Jaguar's 2.0-litre engine, both the petrol and diesel, forms part of its family of Ingenium motors. Available in a range of power outputs, the engine has been developed to be fuel-efficient in mind.

The 25d nomenclature is an indication of what power outputs one can expect on this SUV. As such, the engine produces a hefty 177kW and 500Nm. Though powerful, Jaguar claims a fuel return of 5.8-litres/100km - provided you refrain for wearing your heavy boots.

READ: Jaguar’s F-Pace Chequered Flag SUV is in SA - we have pricing and details

Though we failed to meet this figure, our return of little more than 7.0-litres/100km is a more realistic figure and a greater representative of real-world conditions.

The engine is mated to an eight-speed gearbox that sends power to all four wheels. Though the 'box is comfortable cogging over at its own devices, the steering wheel-mounted paddles do provide a good sense of fun when it is needed. However, these only activate when the gear lever - still Jaguar's rotary knob - is dialled into 'Sport'.

What are your thoughts on the Jaguar F-Pace? And how would you rate the Chequered Flag? Email us. The F-Pace Chequered Flag does not have a different design to the rest of the range, but it does boast with several hints that this is a special one. On the front wheel arches, the plaque carries a literal chequered flag. The rims have also been darkened, adding a welcome contrast to the Yulong White paintwork.

Open the front doors, and the embellishment on the doorsill further hints at the SUV's credentials. The seats are decked in red leather, and ambient lighting creates a pleasant atmosphere.

READ: 'Hold on, Oom!' How a random senior citizen ended up riding shotgun in the ferocious Jaguar F-Pace SVR 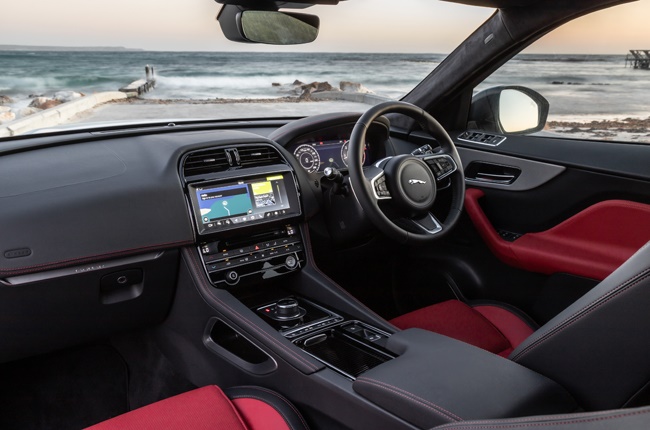 The F-Pace may be a few years old, but it is still one of the finest vehicles in Jaguar's current portfolio. It drives well, offers a solid package at the price, and still looks the part. The Chequered Flag improves on an already good vehicle, even if the total sum of it all is only cosmetically.

Priced at R1 174 900, the F-Pace 25d Chequered Flag carries a slight premium over the model it's based on, but you do buy into something special and unique. Even if it does not scream "special edition!", you will know that this one of the more special variants of the F-Pace there ever was. We live in a world where facts and fiction get blurred
In times of uncertainty you need journalism you can trust. For 14 free days, you can have access to a world of in-depth analyses, investigative journalism, top opinions and a range of features. Journalism strengthens democracy. Invest in the future today. Thereafter you will be billed R75 per month. You can cancel anytime and if you cancel within 14 days you won't be billed.
Subscribe to News24
Related Links
'Hold on, Oom!' How a random senior citizen ended up riding shotgun in the ferocious Jaguar...
Jaguar’s F-Pace Chequered Flag SUV is in SA - we have pricing and details
Next on Life
UPDATE | Ford's new Ranger is about to launch in SA and turn the bakkie game on its head