• The RoadTrip team explored the recent flower bloom on the West Coast in the Alfa Romeo Stelvio QV.

• Alfa Romeo's clover badge is reserved for its performance models.

• The expedition took the team to Klawer, about 300km North of Cape Town.

The annual blooming season of wildflowers on the Cape West Coast and in Namaqualand was truly spectacular this year.

To celebrate the floral extravaganza, we took the wildest Alfa Romeo Stelvio SUV model, the four-leaf clover badged Quadrifoglio, for a quick journey to the town of Klawer.

It was indeed a magnificent scene. As we crested a rise in the road, a riot of colour greeted us. From crimson, cantaloupe, chartreuse, and cream, to cerulean, coral, and crystal… Stretched out before us was a carpet of West Coast flowers in full bloom, and the wild abandon of bright, joyous colours reflected in the rays of the retreating sun was a sight to behold.

The panorama depicted our journey in one glorious shot, so I braked hard, and the big, perforated discs on our gleaming Monto Carlo blue Alfa Romeo rapidly slowed down the Italian SUV. We turned off the N7 highway and stopped next to a farm stall close to the rapture of flowers.

Getting out, we marvelled at the spectacle of colour. Admiring the shades and tints of reds, blues, yellows, and greens, we realised we were at Klawervlei (clover meadow) farm, named for the wild clover that proliferates this area during the rainy season and covers it with a blanket of wildflowers during Spring.

Klawervlei farm, and the prolific wild clover, also gave our destination its name. The small West Coast town on the banks of the Olifants River was renamed Klawer when the railway line and bridge were completed in 1915, and the settlement received town status. For a decade, the train station at Klawer was the end of the line in the rail connection between Cape Town and the Namaqua West Coast.

Did you explore the recent flower bloom along the West Coast? Email us and share your road trip stories and images! Our Stelvio, proudly adorned with the four-leaf clover (Quadrifoglio) badge, blended in beautifully with the kaleidoscope of colour. We spent the next hour or so photographing the spectacular floral paradise - the display of blooms from vygies, daisies, malvas, gousblomme, magrietjies, and sporries are magnificent this year.

Much like the floral display, the Stelvio Q - the flagship of Alfa Romeo's first foray into the SUV segment - makes a breath-taking first impression. Every part of its design stays true to the tradition of the Italian automaker of mixing heritage, speed, and beauty, and lives up to its powerful visual promise.

A dominant signature trilobed grille, artful muscular side surfacing, and a steeply raked, aerodynamic rear hatch convincingly conveys its high-performance capabilities, and powered by a 2.9-litre V6 bi-turbo engine developed by Ferrari, the Q is one of the fastest SUVs now available.

Named for the highest mountain pass in Italy famous for its 48 switchbacks, the Stelvio was first introduced in 2016, and the performance-oriented Quadrifolgio held the title of the fastest SUV in the world, with a record-setting Nürburgring lap time in 2017. However, this record has since then been surpassed.

Nevertheless, with a monstrous 375kW of power and 600Nm of torque fed to the Q4 all-wheel-drive system with Active Transfer Case via a ZF eight-speed auto transmission, the Stelvio Q is blindingly quick. It can accelerate from 0-100km/h in only 3.8 seconds, as we have experienced on the N7 blacktop, and can reach a top speed of 283km/h. Taking the R27 from Cape Town towards Langebaan to first visit the flower haven of Postberg in the West Coast National Park, the hastiest Stelvio also proved comfortable and quick over the tarmac. Its 20-inch tyres provided for a smooth ride while in Natural (or Normal) mode on the DNA dial, the quiet exhaust note belied the intrinsic power potential of the clover-badge bedecked engine.

The sporty intent of the Quadrifoglio specific bumpers, side skirts, hood air intakes, badges, and wheels are complemented by sporty leather seats, real carbon fibre inserts, aluminium detail, and a comprehensive level of specification in the interior. Still, manual controls for the seats in an expensive, luxury SUV left us somewhat perplexed.

After visiting Postberg, we made our way towards Klawer on the gravel roads leading past Aurora and Redelinghuys towards Trawal. The Q was less happy on the sandy dirt roads, as its low-profile tyres did not provide much grip and the suspension could not cushion the undulations. In fairness, it is not designed or developed for this type of road conditions, and its all-wheel-drive systems and other safety equipment coped fairly well, given the unfamiliar conditions.

After visiting Klawer in our clover-decaled Alfa, we turned back towards Cape Town, and in its element, the Q - a BMW X3 M and Mercedes-AMG GLC 63 S rival - excelled in the twisty sections of the N7 near Clanwilliam. Its balance and grip in the sweeps of Piekenierskloof were impressive, and on the long straights its luscious V6 gave new meaning to the sixties term 'flower power'. 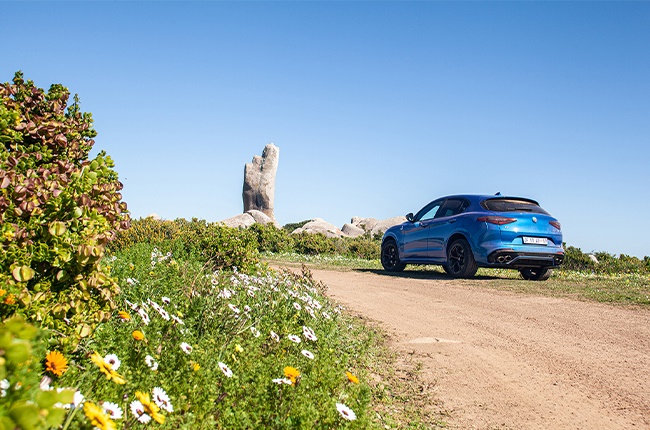 The tradition of the flour-leaf clover, a symbol of good luck, began when, in 1923, Alfa Romeo race car driver Ugo Sivocci wanted to break a string of second-place finishes. In preparation for the legendary Targa Florio race, he painted a white square with a four-leaf clover on the front of his Alfa Romeo RL race car.

As fate would have it, he won the race, but weeks later, while track-testing a new car that did not bear the lucky symbol, he crashed and lost his life. Since then, all Alfa Romeo race cars carried the four-leaf clover - on a white triangle instead of a square, with the missing corner symbolising the loss of Sivocci.

Today, the clover remains a symbol of race-worthy capabilities and good luck and is only bestowed on the most powerful Alfa Romeo race and street vehicles. There is, however, an interesting modern twist to the Q trademark - Alfa Romeo until recently used the QV designation to depict a Quadrifoglio model.

In 2017, Fiat Chrysler Automobiles (FCA) agreed to a trademark swop with German automaker Audi to release the FCA-owned Q2 and Q4 badges in return for the use of the Q designation for Quadrifoglio, plus continued ownership of Q2 and Q4 to depict drivetrain forms. What is obvious, though, is that when provoked (announced and accompanied by a powerful, ominous engine note in Race mode) the Stelvio Q is very deservedly of this badge. We live in a world where facts and fiction get blurred
In times of uncertainty you need journalism you can trust. For 14 free days, you can have access to a world of in-depth analyses, investigative journalism, top opinions and a range of features. Journalism strengthens democracy. Invest in the future today. Thereafter you will be billed R75 per month. You can cancel anytime and if you cancel within 14 days you won't be billed.
Subscribe to News24
Related Links
WATCH | BMW X3 M Competition goes head to head with Alfa Romeo Stelvio Quadrifoglio
Buffalo City to the Mother City - trekking the Land Rover Defender's South African history
Next on Life
Why Ford's new Ranger Raptor matters: Is this the bakkie that changes the market for SA?