You might not recognise the name Autozam, but for Mazda followers, it has special significance.

As the Japanese economy surged ahead in the late 1980s, Mazda was seeking to differentiate its marketing and product mix. Consultants advised that the best way to do this was by launching new sub-brands.

Toyota had proven this theory with Lexus, achieving remarkable success in America. Mazda's two most notable sub-brands were Eunos (for luxury vehicles) and Autozam (for quirky compact cars).

One of the most interesting of all Autozams was the AZ-Offroad. Many of the Autozams featured a collaboration with Japanese compact car specialist, Suzuki, and that meant there was always going to be something for off-roaders. Something small and hugely capable.

A Jimny in all, but name

As Suzuki prepared to introduce in its third-generation Jimny in 1998, Mazda managed to secure a batch of production. The result was Autozam's AZ-Offroad, a very charming bit of Japanese 4x4 vehicle history. 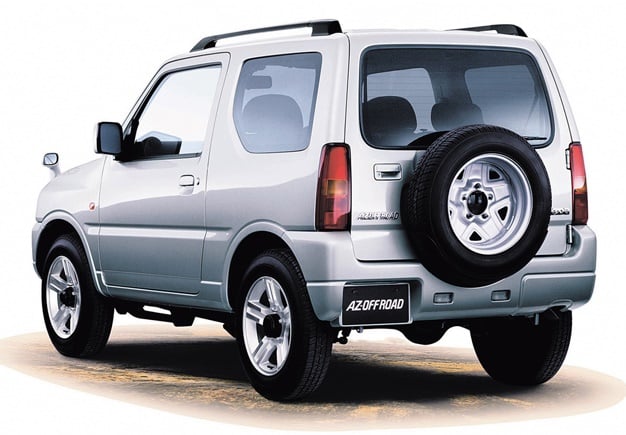 Mazda knew Suzuki's Jimny had great appeal as both a serious off-road exploration vehicle and an urban runabout. Under the Autozam joint-venture agreement, the Jimny gained a slightly restyled front grille, with Mazda's corporate logo taking pride of place. An additional front fender-mounted wing-mirror was also fixed to the passenger side, allowing for better blind spot awareness.

Inside it was every bit a Suzuki Jimny too, but for the steering wheel boss having a Mazda corporate identity at its centre, instead of Suzuki's 'S'. South African Jimny fans would have longed for the Autozam AZ's engine and drivetrain in the late 1990s. It was powered by a tiny engine, paired to a traffic-friendly automatic transmission – something Suzuki only managed to introduce to the South African market with the fourth-generation Jimny, in 2018.

The Autozam AZ-Offroad's 660cc engine was turbocharged and had three-cylinders, which generated 47kW. That peak power number was equal to the 1.3-litre petrol engine, which South African Jimny followers will be familiar with, powering those Suzuki Samurais which were sold here, in the early 1990s.

What made this Autozam's 660cc engine quite remarkable, was its 7500rpm redline. Driving through a four-speed automatic transmission, this Mazda 'Jimny' was good for a 125km/h top speed.

Low mass made AZ-Offroad very capable in technical terrain. This was especially true with a for novice adventure driver at the wheel, who could rely on the combination of a low-range transfer case and automatic transmission, to module speed when things got steep. On sand tracks, the high rev-threshold of this Autozam AZ-Offroad made it nearly unstoppable.

Production of the Mazda 'Jimny' ended in 2003, after only five years in the market, also signalling the end of Autozam. We live in a world where facts and fiction get blurred
In times of uncertainty you need journalism you can trust. For 14 free days, you can have access to a world of in-depth analyses, investigative journalism, top opinions and a range of features. Journalism strengthens democracy. Invest in the future today. Thereafter you will be billed R75 per month. You can cancel anytime and if you cancel within 14 days you won't be billed.
Subscribe to News24
Related Links
How the Mazda bakkie story started
Did you know: Mazda produced a bakkie that was powered by a rotary engine
Next on Wheels24
PHOTOS | Another look at Jeep SA's new R1.2million Gladiator bakkie