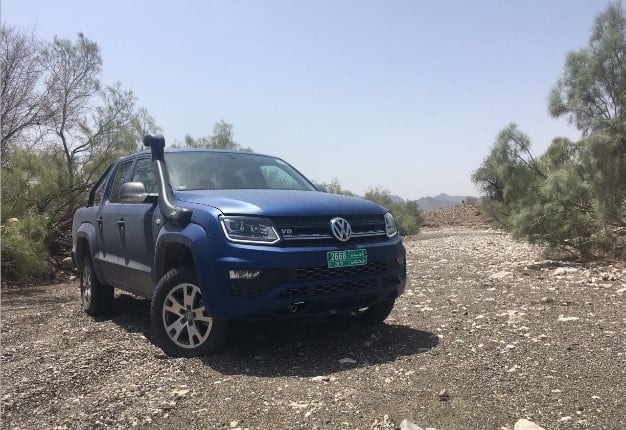 But there’s another tussle brewing and the protagonists aren’t who you think. Volkswagen has just released a 190kW (up from 165kW) version of its Amarok V6 turbodiesel engine. 190kW did you say? Hmmm well that’s the same as the new Mercedes-Benz X-Class V6…

So how does the Volkswagen’s new V6 perform? We travelled to Oman, on the Arabian coast, to sample the new model in various terrain.

The Amarok feels more car-like than any other bakkie I’ve driven. The steering wheel is the same one used in a Golf, it uses an 8-speed automatic torque converter transmission. It’s really a pleasant place to be. What wasn’t pleasant was the 40-degree temperature we experienced in Muscat, thankfully the two-zone climate control is PROPER.

Back to the driving. We traversed smooth highways with random shades of ‘rubble or sand’ blown from the desert or rocky surrounds.

From hazy capital Muscat, we snaked, mostly inland with fleeting sights of the blue water of the Arabian Sea. The destination would be the Al-Hajar mountains and night of camping 1700m above sea level.

The Amarok’s light steering makes tackling the steep (and rocky) mountain pass easier, and I’m impressed by how 5.2m long bakkie handled the tricky pass. There’s so much torque from the V6 that third gear was sufficient, it’s really an engine that shouldn’t be scoffed at.

A brief stop at one of the deepest caves in the world, check out a video here, and we begin the final stretch to the night’s accommodation.

@sean_parkersa camped ?? in the Al-Hajar mountains during the recent 2018 Volkswagen Amarok Tour.

The load bay swallows a bunch of camping equipment that we use overnight on the Hadjar mountains. We were blessed to see a fantastic lightening ‘show’.

According to our guide, Omanis have a liberal relationship with speeding on highways. Therefore, every two kilometres there are speed monitoring cameras.

The cabin, while utilitarian in some aspects (big volume knob) is supremely comfortable, bizarrely our cars were fitted with a ‘winter pack’, which included heated seats.

Sand, sand and sand dunes, that’s what faced us on the third day of this epic trip. We left our desert camp at 8:00am sharp (my brow was already perspiring).

The tall sand dunes that laid ahead were no match for all the torque from the V6, with the traction control off we just powered up the double-storey dune.

The three day trip gave us a chance to drive the Amarok on tar, gravel, rocks and sand. And it didn't miss a beat. Everything we could throw at it, the Amarok powered through, what a tour, what a country.

We live in a world where facts and fiction get blurred
In times of uncertainty you need journalism you can trust. For 14 free days, you can have access to a world of in-depth analyses, investigative journalism, top opinions and a range of features. Journalism strengthens democracy. Invest in the future today. Thereafter you will be billed R75 per month. You can cancel anytime and if you cancel within 14 days you won't be billed.
Subscribe to News24
Related Links
VW's V6 bakkie concept: Amarok Aventura Exclusive revealed
First drive: VW's updated Amarok 3.0 TDI V6 bakkie
Next on Wheels24
Scout III: Move over Ford Bronco, VW plans to revive the iconic off-road moniker