• New Ford Bronco has made its international debut.

• The Bronco is not destined for South African market.

The new 2021 Ford Bronco has been revealed, and it sure is a looker!

The Bronco is not unfamiliar to Ford fans, having been in uninterrupted production between 1965 and 1996. Changes at Ford necessitated the automaker to reevaluate its product line-up in the mid-1990s, which led to the Bronco being killed off.

More than two decades later and Ford revealed the fifth-generation Bronco. Ford says that the Bronco returns as the flagship of a new all-4x4 family that will comprise both two- and four-door variants; the latter a first for the Bronco.

While the SUV looks as if it can go about doing serious off-road adventures, Ford claims that the Bronco has "segment-leading 4x4 capability, long-term off-road performance and dependability."

With all the hype around the Bronco sending local media into a frenzy, only one question is on South Africans' lips: Will it be sold locally? Unfortunately, no. Ford will produce the Bronco in left-hand drive configuration only, which leaves wondering about what could have been.

In America, the Bronco will retail from $29 995 (R505 531 - estimated Ran conversion, excluding various taxes), with more than 200 factory-backed aftermarket accessories to choose from. 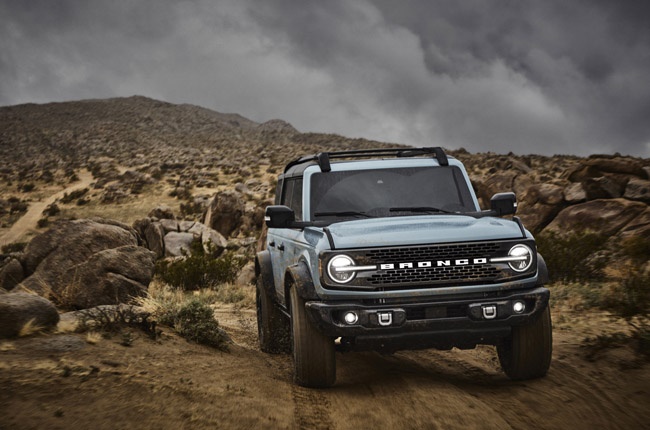 Ford says that its Bronco is made for the outdoors and those seeking adventure. As such, the SUV is fitted with a formidable off-road system; on paper, at least. The Terrain Management System is fitted with a GOAT mode. First coined in the 1960s, the abbreviation stands for 'Goes Over Any Terrain'. And that is what Ford is planning for its Bronco.

Seven driving modes make up the GOAT menu, consisting of Normal, Eco, Sport, Slippery and Sand, Baja, Mud/Ruts, and Rock Crawl for off-road driving. Two 4x4 systems are offered on all Bronco models: base and advanced.

Add to this a ground clearance of 295mm, break- and departure angles of 29- and 37.2-degrees, respectively, and a wading depth of up to 850mm, and you have a vehicle that will do its 'goat' DNA justice.

Jim Farley, Ford chief operating officer, said: "We created the Bronco family to elevate every aspect of off-road adventure and equipped them with class-leading chassis hardware and exclusive technologies to raise the bar in the rugged 4x4 segment and take people further into the wild."

Ford will use two engines in its Bronco, both turbocharged. The 2.3-litre EcoBoost engine produces 201kW and 420Nm, while the 2.7-litre V6 is good for 231kW and 542Nm. Two gearboxes are on offer, that being the familiar 10-speed automatic transmission and a seven-speed manual 'box. If it were to come to SA, the Bronco would have gone up against the likes of the Jeep Wrangler, new Land Rover Defender, and archaic Toyota FJ Cruiser. Its arrival would have genuinely brought new life into the segment and give keen off-roaders something to cheer about as the Bronco battled its rivals for supremacy: both in terms of sales and off the beaten track.

As it stands, we can only hope that when a facelift or new model comes around in a few years, Ford considers right-hand drive markets as new homes for the Bronco.

Should Ford have made the Bronco available in RHD and sell it in SA? Email us.

We live in a world where facts and fiction get blurred
In times of uncertainty you need journalism you can trust. For 14 free days, you can have access to a world of in-depth analyses, investigative journalism, top opinions and a range of features. Journalism strengthens democracy. Invest in the future today. Thereafter you will be billed R75 per month. You can cancel anytime and if you cancel within 14 days you won't be billed.
Subscribe to News24
Related Links
These F-150 bits could make Ford's Ranger amazing if they were available in SA
Next on Life
Inside info you would want to know about Ford's new single- and super-cab Ranger bakkies