RoadTrip | Almost unknown in SA, here's another Chinese bakkie pulling its weight under the radar

With all the hype currently around the pending introduction of the new GWM P-Series bakkie, the release of another strong Chinese contender in the keenly contested local one-ton bakkie market has gone all but unnoticed.

Yes, the Anhui Jianghuai Automobile Company (JAC Motors) may be an almost unknown entity locally, but the state-owned manufacturer is a giant in the Chinese auto industry and a prolific producer of electric vehicles.

However, a recent slump in domestic sales sparked renewed efforts by the vehicle conglomerate. JAC produces sedans and pickups (bakkies), and trucks with model names such as Heyue, Refine, Shuailing, Junling, and Kangling. As such, the automaker is now represented in more than 130 countries worldwide.

Last year the local subsidiary of JAC introduced the Shuailing T6 one-ton double-cab bakkie (also known as the Frison) locally, and its success here led to the stealth-like introduction late 2019 of its latest and most modern contender in this market segment, the T8.

For JAC, the timing was right, as the unexpected Covid-19 pandemic interdicted the launch of GWM’s P-Series. The reveal, scheduled for this month, had to be postponed and will now take place in the second half of the year, possibly around September, dependant on the availability of right-hand drive supply. Meanwhile, we had the exclusive opportunity to drive the new T8 just before lockdown. While based on the T6, the new T8 is positioned above its predecessor. Locally, JAC Motors’ leading contender in the higher-end double cab segment is offered with Lux trim, in 4×2 and 4×4 guise.

Designed specifically to take on the one-ton pickup offerings from Chinese rivals GWM, Foton, JMC, SAIC Maxus, BAIC, and BAW, it is also expected to compete against mid-range models from Mitsubishi (and Fiat), Mahindra, Ford, and Toyota.

The new T8 is about the same size as the current generation Hilux with a loading bay measuring 1520mm by 1520mm, and it has some definite Hilux design traits too. Its attractive lines combine the latest design elements from JAC Motors' international design centres in Italy and Japan, and its big chromed hexagonal grille, clamshell bonnet, and plain, yet strong, waistlines impart the T8 with a robust and sturdy aura.

With Xenon-headlights, LED tail lights with a double-C pattern, and attractive 18-inch alloy wheels specifically, it need not stand back for any similar product from Japan or Europe, and build quality is also surprisingly good.

The doors open and close with a solid clunk, the switches, buttons, and knobs are sturdy, and the interior plastics, while hard and inflexible to touch, are solid and seemingly quite resilient. It took a while to get acquainted with all the functions, but the systems work well. Yes, the LCD readout is still old fashioned (much like in the Isuzu D-Max), the red hazard button with diamond patterns is novel, and the tinny artificial voice guidance of the navigation system was irritating and quickly muted.

The common-rail engine with intercooler and Electrical Variable Geometry Turbocharger (EVGT) emits an Isuzu-like clatter at start-up, and under load, it is very audible in the cabin. At steady speeds, the sound is less intrusive, and its power delivery is smooth and stable (unlike the sudden power burst of the GWM Steed). Still, some extra sound-insulation will help to mask the powerplant’s racket. The mill, while noisy, is eager and quite willing at low revs, and it pulls strongly from below 2 000 rpm. However, the FEV grinder has a narrow power band, and it runs out of grunt before 3500rpm. This means a constant changing of gears to ensure optimal pulling power. The first gear ratio is also indecently short (to aid acceleration from standstill), and on a flat surface, it was better to pull off in second.

Changing gears was no burden, though, as selection via the six-speed manual gearbox is pleasingly slick and quick. It is even better than that of some of its more fancied competitors. The transmission of power to the rear wheels was smooth, too, ensuring a relaxed driving experience.

This was further enhanced by the quite roomy cabin and comfortable, manually adjustable seats but, as can be expected from a pickup with leaf-sprung rear suspension and 210mm ride height, ride quality was choppy over undulations, though well-suppressed. Steering feel and accuracy was adequate for a one-ton bakkie, and handling-wise, it compared well with most class rivals.

So, in terms of performance, the only real drawback on the T8 is its engine that runs out of breath too quickly. This impairs its overtaking ability and also saw us record a relatively high consumption figure of 10.1-litres/100 km (JAC claims 9.0-litres/100km). Still, this was in a very low mileage vehicle with an engine not yet properly run in. Still, in comparison with the Steed and Vigus the T8 is a better proposition, considering its aesthetics, build quality, level of specifications, and all-round capability.

The JAC is also well-positioned within the double cab market in terms of price, occupying the middle-ground between other Chinese contenders and entry-level offerings from more established players. Thus, it makes good sense as an affordable buy. Still, it will be interesting to see how it stacks up against the entry and mid-level models of the P-Series, once they are available here. 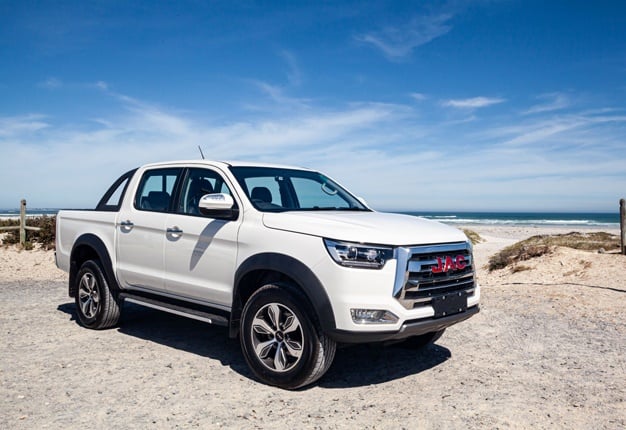 We do not like: Noisy engine with very narrow power band, fuel consumption, limited dealer network We live in a world where facts and fiction get blurred
In times of uncertainty you need journalism you can trust. For only R75 per month, you have access to a world of in-depth analyses, investigative journalism, top opinions and a range of features. Journalism strengthens democracy. Invest in the future today.
Subscribe to News24
Related Links
'A resounding YES!' - GWM confirms diesel-powered P Series will be available in SA
Three reasons why the Ford Ranger and Toyota Hilux should worry about GWM’s new P Series
Next on Wheels24
OPINION | New sketch of 2022 VW Amarok makes us want one even more

Subscribe to newsletters
Lockdown For
DAYS
HRS
MINS
Brought to you by
Voting Booth
Which of these factors are prohibiting you from buying an electric vehicle as your next car?
Please select an option Oops! Something went wrong, please try again later.
Prices should be more affordable
16% - 179 votes
Our unreliable electricity source
9% - 104 votes
There's not enough charging infrastructure
11% - 125 votes
All of the above
64% - 715 votes
Previous Results
Car Doctor
It may look pretty hot, but black cars are not that cool to maintain