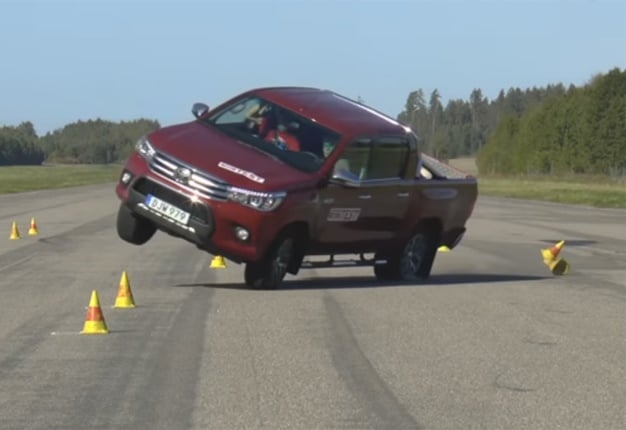 In the video, created by Swedish motoring publication Teknikens Värld, the Hilux can be seen travelling at 60km/h as a test driver attempts to navigate a 'Moose Test''.

The Hilux can be seen nearly tipping over as the driver attempts to avoid traffic cones. Wheels24 contacted Toyota for comment and we've posted the automaker's response at the end of this article.

Teknikens Värld calls the Hilux performance in its Moose Test "a big failure". It claims its driver travelled at 60km/h and while attempting avoid cones, the bakkies, left-side suspension bottomed out and its right front wheel lifted off the track...eerily reminiscent of the publication's test of a 2007 Hilux, nine-years earlier.

Conclusion? Teknikens Varld believes "something is seriously wrong" with the bakkie's dynamic safety system though adds that the result is dependent on the tyres fitted.

Have you ever experienced bad handling with your bakkie? Email us or get in touch via Facebook and Twitter.

Click on the above gif to watch the full video.

The Moose Test is performed at the bakkie's maximum load capacity with the Toyota Hilux having highest capacity among the tested vehicles (1002kg). For the test however it was loaded with only 830kg (including the driver and four passengers).

SHOCKING: Is the Toyota Hilux the 'worst handling' bakkie in its segment?

Most telling is that the video shows rival bakkies, including the Volkswagen Amarok and Nissan Navara, undergoing passing the same tests with flying colours.

Toyota Motor Corporation (TMC) said: "At Toyota, the safety and security of our customers remains our number one priority.

"Toyota takes the report published by the Swedish automobile magazine, Teknikens Värld, on this emergency-avoidance test seriously and we are currently in discussions with the publication to find out additional details about the test.

"Toyota applies its own strict safety standards to all our products and Hilux meets these standards. Nonetheless, to further ensure the safety and security of our customers, we will conduct a thorough analysis of their test and quickly determine our response."

Have you ever experienced bad handling with your bakkie? Email us or get in touch via Facebook and Twitter.

We live in a world where facts and fiction get blurred
In times of uncertainty you need journalism you can trust. For only R75 per month, you have access to a world of in-depth analyses, investigative journalism, top opinions and a range of features. Journalism strengthens democracy. Invest in the future today.
Subscribe to News24
Related Links
SHOCKING: Is the Toyota Hilux the 'worst handling' bakkie in its segment?
New bakkies for SA: X-Class, Amarok, Navara and more on the way
Here's how to tune your Hilux bakkie to 575Nm!
Next on Wheels24
Mahindra brings its new off-road Scorpio S11 Adventure SUV to SA in limited numbers