An aspect the Land Rover Defender is especially renowned for is its off-road abilities. Up until the ceasing of production in 2016, the SUV was the first-choice vehicle for many adventurers and off-roaders. It was an especially bitter pill to swallow, knowing that a legend would be no more.

But almost as soon as production stopped, rumours of a new Defender began circulating, followed by concept sketches and vehicles, test mules, and, ultimately, the SUV we have here today.

The new Defender, available in 110 and 90 guises, is one of the most technologically advanced vehicles to ever come from Land Rover. Still, the SUV foregoes none of the off-road traits that made it such a hit during its first incarnation.

Backing down for nothing

Our test unit, the Land Rover Defender D240 S, is well-equipped when it comes to its off-road package. The various driving modes cater to the conditions one might face when going off the beaten track. We took the Defender to one of our favourite tracks for a shakedown where most of its off-road settings could be tested.

The course provides a range of obstacles, including sand, rocks, inclines, and water.

Drivers can toggle between the various modes on the SUV's dashboard, and the electronics will adjust engine and throttle mapping for the chosen mode. The Defender comes standard with Land Rover's Terrain Response system, as well as electronic air suspension with adaptive dynamics.

Given that the Defender is a renowned off-roader, prospective users will appreciate these features on the SUV. 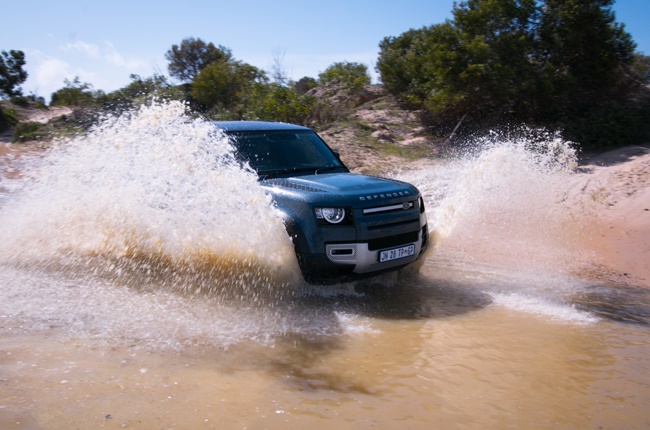 The Defender D240 S is the second most-affordable diesel model in the 110 range. Retailing for R1 111 142, it is powered by a turbocharged 2.0-litre diesel engine that produces 177kW and 430Nm. In off-road conditions, the engine has enough shunt to keep forward-momentum going, and the eight-speed automatic gearbox works well to channel the right amount of power to the 18-inch tyres.

With the air suspension, users can increase the Defender's ride height from 218mm to 291mm, and it has a maximum wading depth of 900mm.

The Defender makes small work of inclines, too, boasting approach and departure angles of 38- and 40-degrees, respectively. Its ramp angle is 28-degrees.

The new Defender is a properly good vehicle for going off-road, and will keep on impressing in the most challenging of conditions.

Have you taken the new Defender off-road? Email us with your experience. We live in a world where facts and fiction get blurred
In times of uncertainty you need journalism you can trust. For 14 free days, you can have access to a world of in-depth analyses, investigative journalism, top opinions and a range of features. Journalism strengthens democracy. Invest in the future today. Thereafter you will be billed R75 per month. You can cancel anytime and if you cancel within 14 days you won't be billed.
Subscribe to News24
Related Links
Here's what you should know about the new Land Rover Defender's off-road capabilities
WATCH | Pandemic drives Cape Town youngsters to start their own mobile car wash
Next on Life
Flexing its muscles - Haval SA's latest inroad to the market: The Tank 300 hybrid SUV