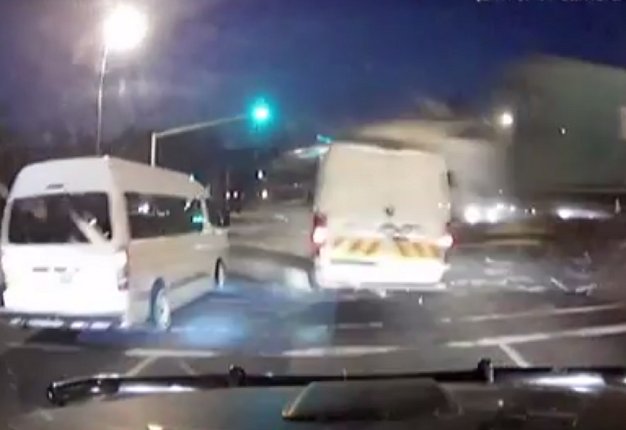 <b>SPLIT-SECONDS TO LIVE:</b> Two taxis in front of the camera move forward the truck smashes through crossing vehicles at high speed. A car that was on their right has already been vaporised. Watch the video. <i>Image: YouTube</i>
PINETOWN, South Africa - Just days after 10 girls were killed in a bus crash in Durban, 22 people died when a truck crashed into four minibus taxis and a car in Field's Hill, Pinetown, on Thursday night, paramedics said.

The latest deaths occurred when an articulated truck hit four fully-laden taxis and a Volkswagen Golf on the corner of Fields Hill (M13) and Richmond Road in Pinetown shortly before 7pm, according to paramedics.

At the weekend 10 people - including eight girls - died when the bus carrying them home from the annual reed dance at the Nyokeni Palace overturned and hit a steel barriers on the R66, near Eshowe. More than 60 people were injured.

A paramedics spokesperson said at least 32 people were injured - 10 of them critically - in the Pinetown crash. Another said most of them were taken to the RK Khan Hospital in Chatsworth and the Inkosi Albert Luthuli Hospital in Berea, Durban.

Botha suggested that the number of dead might initially have been overestimated from the scene and that the figure could drop to 22. However there was no confirmation of this.

The horrific impact was videoed on a carcam in a car waiting at the lights behind two parallel taxis and a VW Jetta to their right. As the lights go green the car goes forward, closely followed by the two taxis. A split-second later the track hurtles through the image, obliterating the car instantly and then the two taxis.

A reporter at the scene said bodies, some covered with silver blankets, lay strewn across the road. Rescuers used the Jaws-of-Life to free some of the passengers from the wreckage. Bystanders helped paramedics by holding drip bags for some of the injured.

It was believed the truck's brakes failed.

A KwaZulu-Natal Road Traffic Inspectorate spokesperson said the Pinetown accident occurred when the brakes failed on a truck belonging to Evergreen Transport. It took the off-ramp from the M13 at the bottom of Fields Hill and crashed into the four minibus taxis and a car at the intersection with Richmond Road.

It came to a standstill about 30m from the intersection.

Witness told paramedics they had seen people flung from the vehicles as they were hit and then dragged by the truck.

The M13 down Fields Hill in the direction of Durban was expected to remain closed until Friday morning to allow crash scene investigators to carry out their work.

The truck driver was in police custody for, among other things, alleged reckless driving.

Transport officials initially said the heavy goods truck belonged to Evergreen Trucking, but on Friday it emerged that it did not. The truck was carrying a container belonging to the Taiwanese Evergreen shipping company.

The driver was identified as a 23-year old Swaziland national. He was arrested on Friday and faces multiple charges ranging from culpable homicide to reckless and negligent driving.

"They are trying not to pay toll fees and therefore use that money for personal reasons. We suspect that is what happened in this case," he said.

"The ongoing use of Field's Hill as a route for heavy vehicles travelling to and from Durban has been a concern for many years," DA MPL Radley Keys said. "We have consistently campaigned - within the provincial legislature and at council level - for a ban on 'heavies' on this stretch of road."

A Sapa reporter who visited the scene on Friday morning said the wreckage had been removed and traffic was flowing as normal though homeless people were scavenging the site and going through what was left behind.

Traffic lights, however, were not working but it appeared no traffic cops had been deployed to direct traffic.

We live in a world where facts and fiction get blurred
In times of uncertainty you need journalism you can trust. For only R75 per month, you have access to a world of in-depth analyses, investigative journalism, top opinions and a range of features. Journalism strengthens democracy. Invest in the future today.
Subscribe to News24
Related Links
Reader: What was he thinking?
Next on Wheels24
Skyscraper death rays scorch Jag