A win for road users: Pothole Patrol seeks to plug even more gaps in Johannesburg tarmac 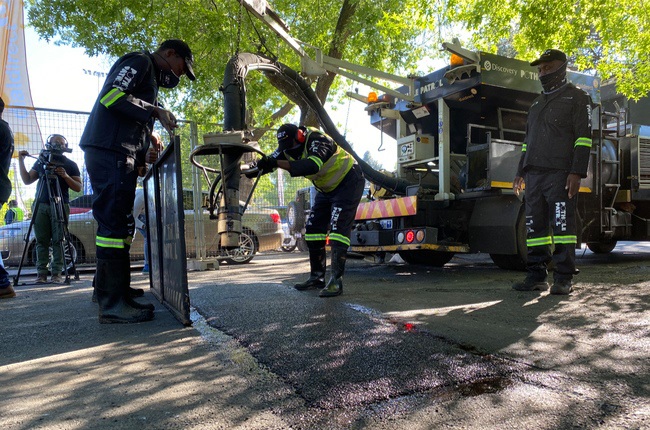 • More than 50 000 potholes have already been repaired around Johannesburg in the last five months.

• New App and Whatsapp line launched to speed up the pothole reporting process.

Earlier this week, Wheels24 popped into Zoo Lake near the city centre in Johannesburg to cover the launch of the new Pothole Patrol App and Whatsapp bot developed by Discovery Insure and Dial Direct, in partnership with the City of Johannesburg and the Johannesburg Roads Agency (JRA).

To bolster the City of Johannesburg's ongoing war on potholes, these vehicle insurance specialists and the government have joined forces to use a private team of road repair specialists. The road repair specialists will leverage the location data they receive through the pothole reporting App and Whatsapp bot to speedily respond to reports of potholes around Joburg. You can download the app now, search for: Pothole Patrol in the Apple App Store or Google Play Store.

The launch of the app and the bot comes after the Pothole Patrol partnership has already seen over 50 000 potholes repaired since the collaboration was sealed by the late Mayor Geoff Makhubo with the private companies in May 2021.

The significant repairs completed in just five months were a joint effort by both the City's entity, the JRA, using its improved environmentally friendly Asphalt Plant in Selby, and the private repair partners. The repair partners used their own specialised equipment, such as a custom-built Isuzu Truck with high-pressure pumps and jets to lay the pothole-filling asphalt.

#JoburgRoadSafety The #PotholePatrol app is available on your app store and residents as well as motorists are encouraged to download it and use it. The City is improving every day ?????? #JoburgTransportMonth ^GZ pic.twitter.com/lzTTIiRdkg

Discovery Insure Chief Executive Officer Anton Ossip says: "We've made a considerable dent in solving the challenge of potholes on our roads. We are pleased to take this partnership forward as we embark on the next phase, using the app and deepening our use of telematics to identify the areas most sorely requiring intervention by the Pothole Patrol."

Head of Dialdirect Insurance Anneli Retief says: "The Pothole Patrol app is simple to use - it geolocates potholes and provides real-time progress on the potholes' repair statuses. With the bot, users will also be able to report a pothole and view the status of the repair." The City of Johannesburg Executive Mayor Mpho Moerane says the launch of the Pothole Patrol app and Whatsapp bot is a milestone step towards the transformation of Johannesburg into a Smart City as captured in the Joburg Growth and Development Strategy 2040.

He praised the progress made by Pothole Patrol with the new intelligent innovations. Moerane described them as great examples of smart mobility, the theme of Transport Month 2021 - set annually in October.

He says: "The Pothole Patrol initiative is not only about speeding up the repairs of our City's road infrastructure but also to make our roads safer for all users who include motorists, motorcyclists, cyclists, as well as pedestrians. In addition, the use of the app and bot will subsequently reduce traffic congestion in pothole affected areas and aid seamless traffic flow."

The app and Whatsapp bot launched this week means any road user can quickly and conveniently report potholes they come across in the City by inserting the specific location to ensure their speedy repairs and monitor work progress.

South Africa's Minister of Transport Fikile Mbalula was also in attendance at the event. He said that the Pothole Patrol collaboration is precisely the kind of partnership that Johannesburg and other cities around the country need more of. Mbalula made it noteworthy that private businesses and the government working together can lead to these critical road repairs being addressed more efficiently. The minister did not address media questions around recent e-toll debates and whether the pay-to-use system would be scrapped.

Road users are urged to download the Pothole Patrol app from either the Apple App Store or Google Play store. Alternatively, you can WhatsApp the word 'Hi' to 084 768 4653 (084 POT HOLE) and follow the prompts to report a pothole in the Johannesburg area.

We live in a world where facts and fiction get blurred
In times of uncertainty you need journalism you can trust. For only R75 per month, you have access to a world of in-depth analyses, investigative journalism, top opinions and a range of features. Journalism strengthens democracy. Invest in the future today.
Subscribe to News24
Next on Wheels24
R1.1million for a used '86 Toyota Cressida? These 'oldies' cost more than most new vehicles