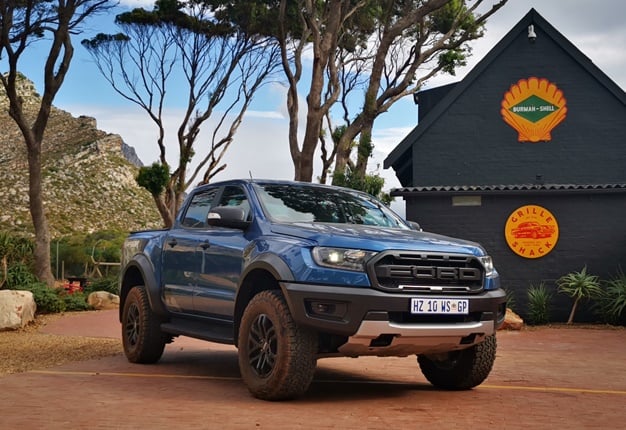 If road trips or weekend drive-outs are your thing, then I’m pretty sure you also know where the best eateries are. In and around Cape Town there are many of these spots, and each one has its own character and atmosphere.

But when you exit the Mother City on the N2 and head on out through Somerset West, a quick right at the last set of traffic lights before tackling Sir Lowry’s Pass will see you connect with the R44 after a few kilometres.

Jot down to Gordon’s Bay and at the T-junction, make a left onto the R44. Now you’re at the start of one of South Africa’s most scenic roads - better known as Clarence Drive. It has plenty of twists and turns, and runs all along the ocean. And some days, if you’re lucky, you will spot a pod of dolphins and perhaps even a whale or two.

From where you make the left, you need to cover around 8km to reach a proper petrol head 'Pump Diner-inspired' restaurant: the Grille Shack. Driving the Ford Ranger Raptor, we set off on the R44 towards the Grille Shack. The bakkie soaks up the windy conditions and, while the ocean looks terrifyingly cold, we’re nestled up quite nicely in the bakkie. The Ranger Raptor has a trick up its sleeve, though. It has a very comfortable ride quality and it makes for a real enjoyable trip.

Suddenly, we see it on the right side of the road. The Grille Shack is situated at the Pitstop Lodge - there's also a little B&B. We enter the establishment, park the bakkie, and make our way inside. It’s nice and cosy, and petrol head stuff are littered across the walls. It has a proper road trip vibe about it, and you can’t help but soak everything in. This area is known for its strong winds (they say Cape Town’s winds are made here), but we’re sorted inside.

We give our order and without taking too long, the food is served. A delicate plate of fish and Parmesan-dusted potato wedges with fennel salad, nachos for another, and healthy 1kg serving of succulent ribs for the other. The meals are filling and you’re left feeling guilty as to of whether or not to indulge in something else. Oh, and kiddie meals like the chicken strips and shoestring chips are a favourite here.

The Grille Shack was founded in 2019 and quickly established itself in the Gordon's Bay area. Road trippers Cape Town and its surrounds are quite familiar with it, and you’d often find that, for the most part, it’s quite full. But fear not, because they will find a space for you.

The food menu fuses American BBQ with a Mexican and a Californian twist. Wheels24's Janine Van der Post says: "We spotted this place a couple of times and just had to try it, and now it's our favourite spot. Not only because of the nostalgic motoring paraphernalia everywhere which gives it such a rustic feel to transport you on a trip down memory lane, but because it's such a kid-friendly, chilled vibe. There's a play room with child minders, and a great big lawn outside with wooden ponies for the kids to ride, and a fun rock trail area.

"The food is outstanding. The crispy chicken strips are not only a fave of our sprog's but they go down a treat with the adults too, along with other boons on the menu. The hamburgers are humongous, and desserts are even better, with the buttermilk waffle and salted caramel ice-cream a generous portion which just melts in your mouth.

"It also makes a great location to grab a bite after testing vehicles and having a stunning photo shoot of your car at the various look-out points along the way."

We live in a world where facts and fiction get blurred
In times of uncertainty you need journalism you can trust. For only R75 per month, you have access to a world of in-depth analyses, investigative journalism, top opinions and a range of features. Journalism strengthens democracy. Invest in the future today.
Subscribe to News24
Related Links
WATCH | These four boys got a ride to their new school in a Ford Ranger Raptor and it made them...
REVIEW | Is the Ford Ranger Raptor justifiable at R800 000?
Next on Wheels24
Lego unveils a life-sized Lamborghini Sián FKP37 supercar built from 400 000 pieces