Tesla is known world-wide for their range of all-electric vehicles like the Model 3, Model X and most recently, the Cybertruck. The guys at Budget Direct Car Insurance takes a look at what kind of other electric cars they'd love Tesla to create.

After 10 years in the marketplace, Tesla is the world’s top-selling electric car manufacturer.

Now the company is aiming to conquer the ever-crowded pickup truck (bakkie) market. Elon Musk has referred to the coming Tesla pickup truck as 'Cybertruck' on his Twitter feed.

Needless to say, competing manufacturers will be awaiting the release nervously, as the electric vehicle sector goes from strength to strength in terms of design and popularity.

We were thrilled by the news and by Tesla’s seemingly never-ending ability to innovate. So we started to think about what kind of other electric cars we’d love Tesla to create.

Here are 8 Tesla vehicles we want to see: A motorbike might not be the first thing that comes to mind when you think 'Tesla', but we think a Tesla Motorcycle would be an awesome thing. Classic Tesla design is written all over this bike, and we think it would look right at home in the Tesla product range.

This is clearly a superbike, so we have provided a space to lie down when you cruise past other bikes. But wait, is that a fuel tank you spy? No we haven‘t made a fatal error, that‘s where the electronics and batteries are located. We know the question you‘re about to ask. The answer is no; this bike is not autonomous. For those of you who are not car buffs, Hot hatch is short for hot hatchback and is a high-performance version of an everyday hatchback car.

The Hot hatch market is a busy and competitive one, with the likes of the Honda Type R, Ford Focus ST, BMW M135i xDrive and many more jostling for top spot.

We‘re confident that this all-electric Tesla hot hatch would blow the competition away if it were to hit the market for real. We think that this car‘s spiritual home is the legendary Nürburgring-Nordschleife racecourse. Do you agree? Since the news broke that Tesla is developing an all-electric semi-trailer truck, which is called Semi and is due to enter production in 2020, we couldn‘t help thinking that it‘s only a matter of time before we see Tesla busses driving themselves around major cities.

This city bus takes inspiration from the initial Semi design and ticks all the boxes for the Tesla minimal style. Check out the continuous window glass around the bus. We think that riding this bus wouldn‘t be fun even during rush hour. 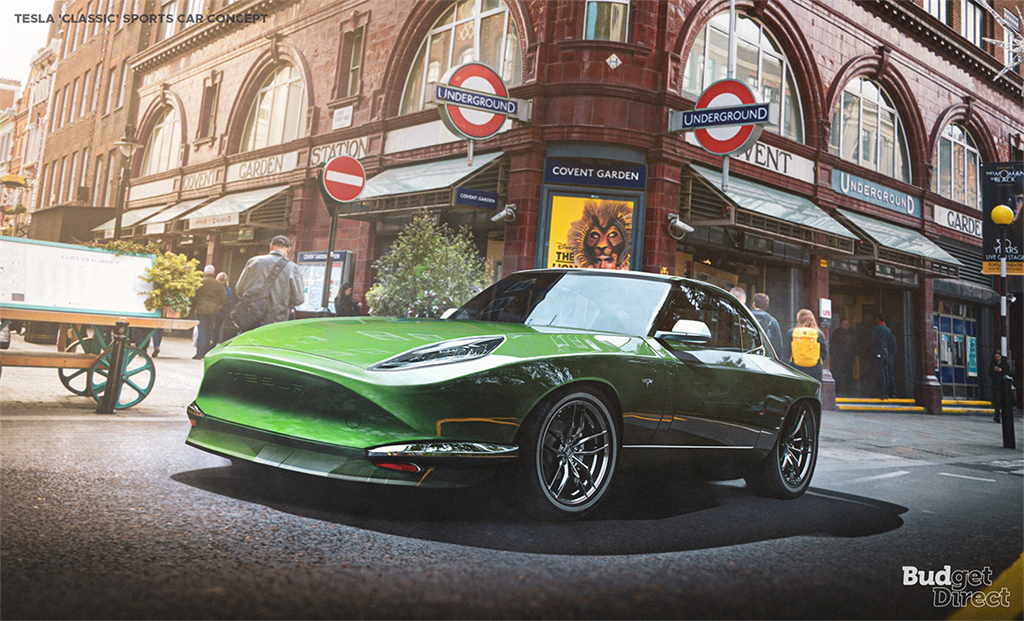 But we think that this retro Tesla is pure class all the way. It should be; it is after all inspired by the much loved and always iconic Jaguar Type-E. With its long hood and classic Type-E wheelhouse, this car pays tribute to the Jag, but we think you‘ll agree it has a vibe that is unmistakably Tesla. When you‘re daydreaming about your fast car wishlist (instead of working), tractors are probably the last thing on your mind.

But we‘re here to remind you that none other than Lamborghini made tractors before they created supercars, so we think Tesla could easily step into the agriculture marketplace and own it.

And yes, this tractor would have to be autonomous. Any farmer would love to kick back and let this Tesla tractor do all the work. Yes it‘s a tractor, but check out the window design and minimal body; this vehicle is undeniably a Tesla. This would be the smallest four-wheeled vehicle in Tesla’s product family, but it would have all the power and functionality expected of any Tesla product.

The vehicle’s extra batteries and other electronics are shielded behind sturdy bullbars and to provide extra power we added batteries upfront.

This vehicle has two seats, but there are two optional seats directly at the back. We have kept the Tesla design language alive here, but safety comes first; hence the rather un-Tesla like roll cage. It‘s a tesla for sure, but not as you know it.

If it ain’t broke, don‘t fix it goes the popular saying. So with that in mind, we have stuck to the design features that make the Tesla brand so iconic.

Our Amphibious car might look like a regular Tesla, but as you can see we‘ve added some features that give this vehicle the ability to cross water. The wheels retract like something right out of 'Back To The Future 2'.

Since it‘s a Tesla, this car is fast. So fast it could probably give a speedboat a run for its money in a race. Yes, this car really belongs in the (not so distant) future. Since founding his company SpaceX in 2002, Elon Musk has been working on manufacturing rockets and spacecraft.

So this flying car would no doubt have to be designed with the expertise of SpaceX. It‘s still a Tesla though so there are no jet engines here. When it‘s cruising roads on the ground, the flying blades are hidden away, making it a nice little compact city car.

But once the car is airborne, the rear wing extends, the blades are deployed and the wheelbase increases for more stability. This reminds us of the mini helicopter in the James Bond movie 'You Only Live Twice'.

We hope that the Tesla Cybertruck isn‘t the last time the company branches out into new areas. We think that these ideas could easily become reality, so keep your eyes peeled.

We live in a world where facts and fiction get blurred
In times of uncertainty you need journalism you can trust. For only R75 per month, you have access to a world of in-depth analyses, investigative journalism, top opinions and a range of features. Journalism strengthens democracy. Invest in the future today.
Subscribe to News24
Related Links
Battle of the battery bakkies: Tesla Cybertruck vs. Neuron T/One
SEE | We can't stop laughing! The internet is still having hilarious reactions to Tesla's crazy...
Next on Wheels24
Tiny Bajaj Qute is the modern depiction of what Japanese Kei cars used to be in the 90s