These vehicles have names that sound faster than they actually go <b>FINALLY SOME STREET CRED?</b> Hyundai has launched the new i20 N-Sport in South Africa, it features more power and upgraded styling details.<i>Image:Hyundai</i>

• Some automakers are known for building supercars, or fast cars.

• Carmakers have created special edition models with names which suggest they are fast.

• Sometimes, the badge is merely a farce.

There's an old saying: Don't judge a book by its cover.

That adage is associated mainly with human beings and their physical appearance but there are certain cars that fit the bill as well.

A book and its cover

Often, you know by a car's name that it's fast. Any Ferrari, Lamborghini or Porsche are examples.

Can you think of any other models that can be added to the list below? Please email us.

Besides those exotic supercar powerhouses, there are other models which have names that will make one sit up and take note. But when it comes to putting down the power, the badge is merely a farce.

The iconic DMC DeLorean is one of those cars. Although it was popular in the Back to the Future movies as a futuristic, time-travelling machine, not only did it not sell well but it was one of the slowest cars in production at the time. It even cost more than a Porsche 911 when it was introduced.

A few manufacturers, like Mercedes-Benz and Volkswagen, offer the aesthetic packages of their performance variants as an optional extra on their mid-range models, minus the grunt under the bonnet - obviously.

Here are a few examples you will find on the roads:

Volkswagen tried something different when they used the same body as the six-generation Polo to make an entirely different model in the form of the Polo Vivo. The original Polo Vivo was based on the 9N chassis and came out in 1.4- and 1.6-litre engine configurations.

Its current generation GT model boasts plenty of aesthetic changes, like a lowered suspension, chrome-tipped exhausts, 17-inch wheels and sticker decals. The GT model makes use of a 1.0 TSI engine that kicks out 81kW. Hyundai and performance were words you could never mention in the same sentence. But the Korean brand has made big strides in the performance department over the years with its N range of performance models.

Before the likes of the performance-orientated i30N and Veloster Turbo came onto the scene, the popular i20 hatch received the N treatment but, perhaps disappointingly, none of it found its way into the engine.

Besides the stainless steel free-flow and stiffer suspension, it received 17-inch alloys as well as body additions to the side skirts, front and rear bumper, as well as a rear spoiler. Performance-wise, it only made 85kW.

Toyota changed the name of its iconic TRD performance arm to that of Gazoo Racing with a number of models, like the Yaris and Hilux bakkie that received the treatment locally.

Seeing as though the Hilux is already a local winner in terms of sales per month, the Japanese brand decided to add a top-of-the-range GR Sport version to the family.

The bakkie is immediately noticeable because of the red and black sticker detailing but that is as far as it goes. Under the bonnet is nothing special and it uses the brand's popular 2.8-litre turbodiesel unit that churns out 130kW. It's not a racer by any means but if it bears the "go-faster" signage, it should at least be fast.

Nonetheless, South Africans and Hilux fans abroad don't seem bothered as it's still a stunning bakkie and any Toyota fan would love to own one.

Yet another Hyundai finds itself on the list but this time it has nothing to do with the N range of performance models. When debuted in 1998, the Tiburon was meant to be the start of something for the Korean brand.

It had the blueprint to be fast but at the time, there were better and more practical options. We live in a world where facts and fiction get blurred
In times of uncertainty you need journalism you can trust. For only R75 per month, you have access to a world of in-depth analyses, investigative journalism, top opinions and a range of features. Journalism strengthens democracy. Invest in the future today.
Subscribe to News24
Related Links
Enzo, Cooper, Elise: Here are some cool 'car' baby names for expecting petrolhead parents
WATCH | Six car names with strange stories behind them
Next on Wheels24
Hot Wheels making new memories for this car-crazy dad and son (Plus win a Track Builder) 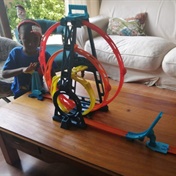