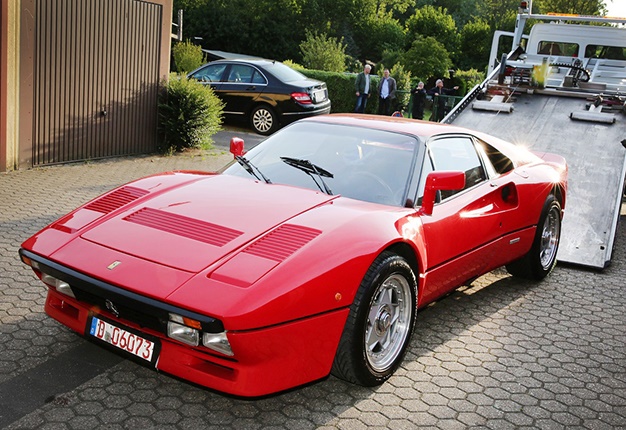 Earlier in May, we reported that German police recovered a valuable 1980s Ferrari stolen during a test drive.

A man sped off with the rare car while posing as a would-be buyer.

Bugatti Veyron makes a run for the border

The defining hypercar of the 21st century is not something you could ever be stealthy about. Even less so, when it is a chromed Hyper Sports derivative Veyron.

Despite the obvious issues with trying to resell such a valuable hypercar, it did not deter a Polish car thief, who managed to get the W16 powered Bugatti started and rolling in 2011.

After the Swiss owner alerted authorities that his Veyron was missing, German police finally managed to intercept the stolen Hyper Sport in Bayern.

Powered by a slightly sanitised version of the F1 engine that Alain Prost sat in front during the 1990 season, the F50 is an authentic Ferrari road racer. Very rare too - with only 349 built.

American pilot, Baker, desperately wanted one but knew he could never afford it - so he decided to con his way into having an F50.

He simply befriended a dealer, and then drove off with an F50 in 2009 - never paying.

The car in question was eventually found in a Kentucky warehouse, during a drug raid by the FBI.

You'd expect the FBI to be safe custodians of such a rare and valuable stolen vehicle, but two agents crashed the F50 while transporting it to a secure holding facility. The car was eventually sold on auction for $370 000, in crashed condition.

When McLaren was a dominant F1 team and before AMG became Mercedes-Benz's supercar builder of choice, there was the SLR: Supercharged V8 GT with the three-pointed star on its grille.

It also featured keyless entry, which meant that thieves with proximity awareness could steal it - if an inattentive owner was standing close by.

This is exactly the fate which befell a McLaren SLR back in 2006, parked kerbside outside an address in South Buckinghamshire.

Thieves managed to get in and drive off. They were apprehended a mere 20km and 50 minutes later, after the SLR's tracking device successfully allowed a police intervention.

The lure of a yellow Lamborghini Gallardo is tremendous and proved too much for Max Wade to resist in 2011.

In an act of audacious automotive thievery, Wade rappelled into a San Francisco dealership to take unlawful ownership of the Gallardo.

When the car was eventually discovered in Wade's storage unit, his reward was a life sentence - after the 19-year old had shot another teenager in a drive by altercation.

We live in a world where facts and fiction get blurred
In times of uncertainty you need journalism you can trust. For only R75 per month, you have access to a world of in-depth analyses, investigative journalism, top opinions and a range of features. Journalism strengthens democracy. Invest in the future today.
Subscribe to News24
Related Links
Thief poses as classic-car buyer, steals R31-million Ferrari 288 GTO during test drive
What a good boy! Crime-fighting dog catches carjacker
Next on Wheels24
Drag race | BMW 4 Series vs Audi A5