WATCH: The coolest car names of the century so far What's in a name? When it comes to cars, quite a lot. Here are the best-named cars of the century so far.

Car names are very important and it's the reason it is so highly debated. The 21st century has seen the birth of some great monikers.

The Korean automaker's first sports car was given a name that not only promised a lot, but it also lived up to the expectations.

There's hardly anything not to like on the Stinger GT: it has an incredible design that makes it quite prominent on the road, and those power figures are sublime, making it a pleasure to drive.

The front end design is sharp and aggressive. I love the LED light design right across the rear, along with the twin exhaust tailpipes on either side of the rear bumper. The second-generation 8-speed transmission is a hoot making gear changes absolutely seamless.

With 272kW on tap, overtaking is child's play. Acceleration picks up without any notice, and the Stinger GT is an incredible piece of machinery. If a car had to match a quote, the Stinger GT would go it: "Float like a butterfly, sting like a bee"... It sits on the road like glitter on a toddler's art piece and goes into tight bends like ease, gliding out as you give it more throttle.

This car certainly does what it's name says. The 812 Superfast is powered by a new 6.5-litre V12, and is the benchmark in the mid-front engined sports car segment, achieving its maximum power output at 8500rpm. The result ensures the kind of the thrilling top-end performance that is the exclusive characteristic of Ferrari V12s. Maximum torque is 718Nm at 7000rpm, a significant 80% of which is already available at 3500rm. 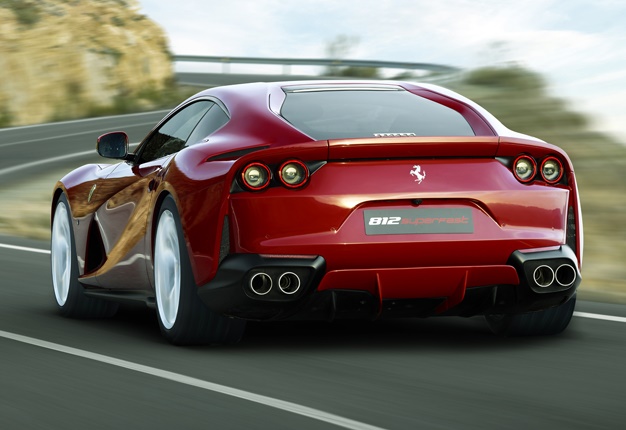 Probably one of the most anticipated new bakkies of the year, the SA-built Ranger Raptor is the most rugged of the automaker's range, and it is inspired by the F-22 Raptor jet fighter.

Selected range-topping models, including the Ranger Raptor, will be powered by the all-new 2.0 Bi-Turbo diesel engine assembled at Ford's Struandale Engine Plant in Port Elizabeth.

This unit produces 157kW and 500Nm  up by 10kW and 30Nm compared with the current 3.2 TDCi - and delivers up to a nine percent improvement in fuel efficiency when combined with the advanced new 10-speed automatic transmission. The McLaren Senna edition has been designed, engineered and developed with single-minded purpose - to be the ultimate track-tuned car Legalised for the road.

Codenamed M840TR, the 4.0-litre twin-turbocharged V8 engine at the heart of the McLaren Senna is the most powerful road car internal combustion engine created by McLaren, producing 588kW and 800Nm.

Accoridng to McLaren: "The indomitable spirit of Ayrton Senna has always been alive at McLaren and the McLaren Senna will further amplify his global legacy and link to the McLaren brand." This car gets its name from the Spanish word for hurricane. The Huracan combines absolute performance with easy-to-drive road behaviour and both luxurious and sport-oriented finish. With the Huracan, Lamborghini had taken a big step into the future when it made its debut in 2014, and enhancing the brand’s illustrious history with the next automotive legend. We live in a world where facts and fiction get blurred
In times of uncertainty you need journalism you can trust. For only R75 per month, you have access to a world of in-depth analyses, investigative journalism, top opinions and a range of features. Journalism strengthens democracy. Invest in the future today.
Subscribe to News24
Related Links
Lamborghini's epic Huracan: 'Driving my dream car' in SA
WATCH: XR8 to Ranger Raptor - Ford's incredible high-performance bakkies
Next on Wheels24
Hot Wheels making new memories for this car-crazy dad and son (Plus win a Track Builder)