• Gail Wise bought the first Mustang, ever, two days before the World Premiere.

• Kedibone Moloisane purchased a Mustang after undertaking a road to Mpumalanga in one.

The Ford Mustang is a cornerstone in automotive history, but did you know that three women have made their mark on the Pony car's legacy? Two of which are South African, mind you!

Back in 1964, when the Mustang first went on sale, prospective buyer, Gail Wise, would walk into a Chicago Ford dealership and make history twice in a matter of moments. When she signed the contract to take delivery of her Mustang, she became the first Mustang owner, as well as the first woman in the world to own a Mustang!

Wise did not know it at the time, but that moment on 15 April 1964 will forever be remembered for as there is fuel pumping through our veins. Ford says that Wise purchased a skylight blue convertible Mustang with her first teacher's paycheque and bought the car two days before the official world premiere.

In 2005, after standing abandoned for 27 years, Wise and her husband restored the car and the genesis of the Mustang nameplate is still in good health. Gail Wise and her family (QuickPic)

South African businesswoman, Kedibone Jozine Moloisane, may not have been born yet when Wise bought her Mustang, but she is experiencing every ounce of excitement that riddled Wise's bones when her American counterpart took delivery of her first Mustang.

Moloisane entered the sports car world with the purchase of the 5.0-litre V8 Mustang. Her first taste of the car came after spending time in her nephew's 'Stang on a trip to Mpumalanga. That sealed the deal for her and upon her return made a stop at a Ford dealer. She says that she's been a fan of the Mustang from "those early Vin Diesel movies" and that the car will remain in her family for a long time to come.

She notes: "Since buying this car I can't let go of it, it is the best decision I've ever made, and that sound is mighty!" In 1999, a young Jeanette Kok-Kritzinger set a Women's Land Speed Record for a South African. Aiming a heavily-modified Mustang down a cordoned-off section of the N3, she drove the 550kW Mustang en route to the record.

Sharing the car with racing legend, Peter Lindenberg, Kok-Kritzinger wielded the 6.0-litre V8 Ford Mustang to a speed of 314.17km/h on her first attempt. Then within the hour, she pointed it in the opposite direction, as per the rules, and managed 301.07km/h, resulting in an average speed of 307.9km/h. It's an extraordinary record that remains unbroken to this day.

READ: Women in Wheels | Meet Jeanette, SA's fastest woman who made history in a Ford Mustang

Kok-Kritzinger says: "I aimed to set a Women's Land Speed Record and by doing so, be an inspiration for women in motorsport. In the mid-nineties, only a few women were participating in motorsport, and I wanted to make South Africa aware of the fact that women could be involved in motorsport and that you have to follow your dreams." 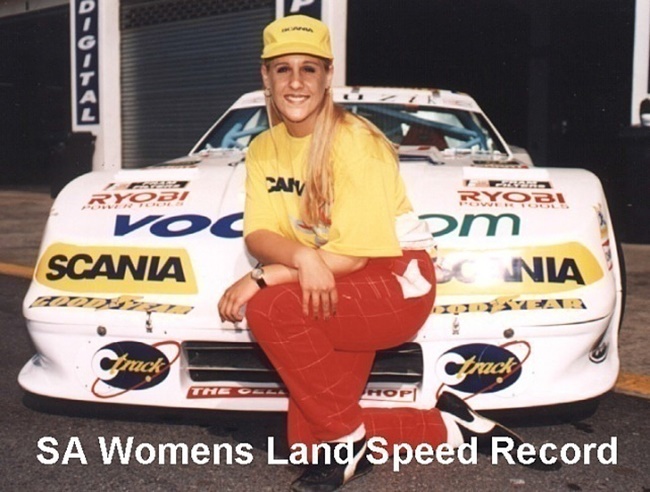 We live in a world where facts and fiction get blurred
In times of uncertainty you need journalism you can trust. For 14 free days, you can have access to a world of in-depth analyses, investigative journalism, top opinions and a range of features. Journalism strengthens democracy. Invest in the future today. Thereafter you will be billed R75 per month. You can cancel anytime and if you cancel within 14 days you won't be billed.
Subscribe to News24
Related Links
Women in Wheels | Meet Jeanette, SA's fastest woman who made history in a Ford Mustang
Women in Wheels | Mercia Jansen on inspiring young women and buying her first bike at 40
Next on Life
How Shannon Gahagan went from a sporty V40 owner to Volvo Cars marketing boss