<B>BEETLE BUG:</B> Wheels24 reader GERLACH CLAASSEN tells us about his VW Beetle history and sent in some images of his rebuild project. <I>Image: Gerlach Claassen.</I>

CAPE TOWN, Western Cape - Wheels24 reader Gerlach Claassen shares his VW Beetle story and all the hard work he has put into this 1300 model manufactured in 1975.

Claassen says the car was registered in 1976.

'I STRIPPED THE CAR DOWN'

It was a five year project. I stripped the car down to the metal for a full restoration. Everything on this car is replaced and all the work was done by myself. The spray work was done by my dad. This yellow shade is called 'Lemon Chrome'.

There are new rubbers all around, stainless steel bolts, chromed bits, a new Empi roofliner, Recaro Pole Position SPG seats with Recaro railings which I imported from the United States.

Other goods include: FIA racing six-bolt seat belts with turn buckle, new carpet with under sound block, Momo Porsche EuroCupGT steering wheel, Empi Hurts short shifter; all the light lenses have been replaced and the rear lights are LEDs.

Front and rear brakes are replaced and there are new pipes. The master cylinder is a 23.8mm dual disc brake master cylinder. On the front I'm running VW Golf Gti brakes with ventilated discs, I'm planning to go over to AP 5200 4-pot with VR6 disca when the turbo motor goes in. The wheels are 16" Lenso BSX.

Front suspension is an adjustable lowering beam with anti-roll bar built by Flat Four Racing. Racing king and link pins with all the stuff that needs to go with it. On the rear it's running racing adjustable spring plates with urethane torsion bushes.

Gearbox is standard but that will be change with the turbo motor setup. Gearbox is held by a Transaxle strap kit with urethane tranny mounts and torque bars to take the strain of the gearbox with the motor.

I'm busy building the new motor for it and it's not cheap at all. I'm using an AS21 casing with 8mm studs and full flow, cleaned and ported.

It will be a 1835cc motor with a 'hideaway' turbo - same setup as the CB performance unit. The pistons are Mahle Forged pistons with graphite coating and 92mm Mahle Barrels. The crank is a 69mm counterweight crank with a lighter fly wheel with eight dowel pins that is built by Dave from Flat Four Racing, Chromoly H beam Connection rods.

Fueling is done with Dellorto 36 DRLA turbo carburetors. The turbo is a Rajay with a 38mm external waste gate.

A bit of info and history about my 1976 beetle. She was built in 1975 and registered in 1976 and was a snow-white colour. Between 1976 and 1990 this beetle was used by the South African government in the Free State "following the number plate info I received".

My mother's brother-in-law had worked in court at the time and bought this Beetle for her birthday in 1990 when it went on auction. Between 1990 and 2006 this beetle had a lot of action while it was in the Free State on LadyBrand: Someone drove in to it on the right side; the handbrake broke one day and once it ended up against a tree bending the rear bumper.

It was resprayed and minor dings were fixed.

In 2006 the Beetle was given to my sister to use as her university vehicle to drive around for three months in Stellenbosch. My father resprayed the car white again and fixed some of the small things that wasn't working on the vehicle. In that time our next door neighbour bought himself a crazy 2.4 litre turbo Beach Buggy. This thing was hell of fun, expensive to maintain and damn fast - 10.6sec down a 400m strip.

So the air-cooled bug bit me. My uncle told me I could take the Beetle and so I become the new owner of her.

And so the plans started: What color, style, wheels and the list goes on. My dad wanted to drop the roof by 5cm, but I didn't like that plan. And so the stripping started. The pan was really clean because most of her life she was been driven inland. I found some odd rust spots, but that was normal for a Beetle that was older then me. So my five years of building my Beetle started. A lot of time went in to redoing the panels, replacing the right rear wing and collecting new parts for my build.

My plans took the direction of the 'Californian' look. A saw a photo of a yellow one and my head was stuck on that look. And then one day I came down on a photo of a 'German-look' beetle. I told my dad that this was what I wanted to build and the rest of it is history.

In mid-2009 I had the body prepped to get it painted. The plan was still to go the yellow color, but which shade of yellow? I wanted to spray it 'Porsche yellow' so ended up with LKL 13M 'Lemon Chrome Yellow' toner. On December 15 2009 we started painting. About close to nine liters of paint went in to this car.

We live in a world where facts and fiction get blurred
In times of uncertainty you need journalism you can trust. For only R75 per month, you have access to a world of in-depth analyses, investigative journalism, top opinions and a range of features. Journalism strengthens democracy. Invest in the future today.
Subscribe to News24
Related Links
Reader Claassen's 1975 VW Beetle
VW Beetle love: Readers send in their pics!
VW Beetle gallery: Readers send in their pics!
Next on Wheels24
LETTER | I'm a paramedic, if we can't get PrDPs, we get suspended without pay 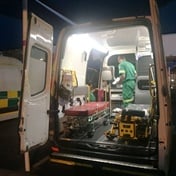 Subscribe to newsletters
Lockdown For
DAYS
HRS
MINS
Voting Booth
Do you think Lewis Hamilton deserves to be knighted by the Queen?
Please select an option Oops! Something went wrong, please try again later.
Yes, he is an incredible athlete
28% - 26 votes
No, he hasn't done anything special
21% - 19 votes
He is good, but doesn't deserve the honour
51% - 47 votes
Previous Results
Car Doctor
EXPLAINER | Why the exploded tyre on the back of that Ford Ranger caused so much...