• An old Toyota Stallion has gained some fame on social media.

• Wheels24 reader Pal Mabelane wanted Twitter users to retweet his post so he could get his father's bakkie serviced by Toyota.

• The bakkie has been in the Mabelane family since 1998 and has never missed a service.

We love featuring our readers' cars and bakkies, but we came across an extraordinary story.

Wheels24 reader Pal Mabelane tweeted a few images of his father's Toyota Stallion and asked for some retweets (RTs) so the local automaker could service the vehicle as a gift for his dad's belated birthday.

Toyota South Africa has since replied and told the young man that if he could get 500 retweets, they would indeed service the vehicle. It's been only two days since Pal posted the images and he already has over 2400 retweets.

Toyota told Wheels24's Janine Van der Post that this is a once-off occasion and while they have numerous requests from thousands of followers of the brand, this story touched them because the Stallion is such a classic and a special vehicle in its own right. Pal and his family have endless stories to tell about this well-known vehicle in their community, and now with its claim to social-media fame, Mr Mabelane's Stallion has become a sought-after bakkie.

You can quickly tell by conversing with Pal, just how passionate they are about the vehicle, and how much care their father has always given it.

Pal and his dad, Lesela Mabelane, are from Limpopo. Although Lesela can't remember what he paid for the Stallion in 1998, he bought it at Supra Toyota in Middelburg, Mpumalanga, but remembers the sales person's name was Craig Hackleford.

So what made Lesela pick the Stallion as a vehicle of choice?

Pal says: "It's two-fold; there was a water supply problem in the area, and my father wanted a bakkie to use to fetch water. However, the biggest motivator was because my mother works at a rural school in the area and the road, until four years ago, was a gravel road. He knew a Toyota bakkie would handle it because they are known to be reliable and resilient. As he and my uncle (his twin brother) like to say: 'Toyota is not for like, it's for life!'.

Do you own an older vehicle you'd like to tell us about? Please email us here and we'll share your story and images. He also says this bakkie holds a special place in their family's heart: "All the children in the family learnt how to drive with this bakkie."

It was involved in its first-ever accident only three years ago, and the insurance company wanted to write it off. Pal says: "At our insistence, we told our father to fetch it from the panel beater, and we would fix it ourselves since they had said it is 'uninsurable'."

This motivated their parents to drive to the insurance company, and they showed them the text messages from their children. Not only did they fix it, but they also did one better and kept it insured.

Mr Mabelane recently had the Stallion resprayed with a new paint job, fixed up the body and got some new rims.

Listen to my little sister when she sees it ?????? pic.twitter.com/eqK1UP80cK

This Stallion also has a name. Pal explains the 'Toyota' badge-name at the back of the bakkie came off letter by letter and until recently, only the 'OYO' letters were left. Everyone in the area calls the bakkie "OYO".

Pal says their favourite memory of the Stallion is when his dad was relocating and made two return trips of approximately 830km each, moving his furniture from Rustenburg. He says: "The Stallion, fully loaded, towed a hired double-axle trailer loaded with almost four times the size of its load and comfortably delivered everything to the intended destination, hassle-free."

"If anything, my dad is exceptionally strict with adherence to the regular vehicle service schedule. None of his cars ever miss a service, and that is precisely what he did for the Stallion: regular services. My mother was the primary driver for most of its life and my siblings, and I always pestered her about fitting a radio in the car until we gave up, the original radio slot still has the original 'Toyota' sign on it. 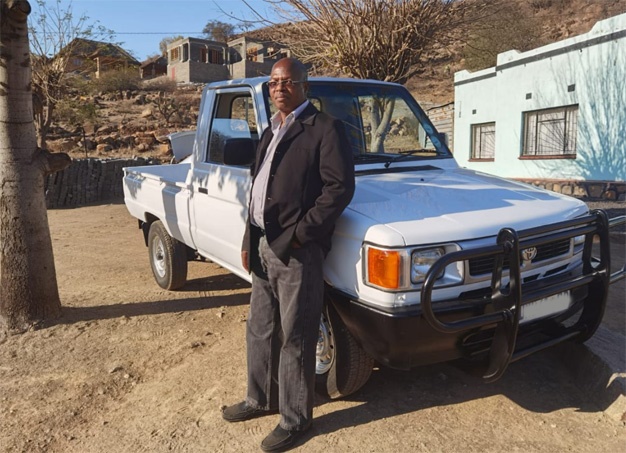 We live in a world where facts and fiction get blurred
In times of uncertainty you need journalism you can trust. For only R75 per month, you have access to a world of in-depth analyses, investigative journalism, top opinions and a range of features. Journalism strengthens democracy. Invest in the future today.
Subscribe to News24
Related Links
'In 1970 I bought a new Mazda F 1000 bakkie for R1189' - reader
Honda’s first bakkie was a 9000rpm screamer
Next on Wheels24
LETTER | Dear Toyota, here's why you should bring the Corolla Cross compact SUV to SA