Mention the Toyota GT86 among petrolheads, and you'll immediately spark a conversation. It's a polarising vehicle; some say it's the best sports car you can buy (that won't cost an arm and a leg to run), while others will tell you that it's too slow.

Of course, we each want different things in cars - some of us want speed and the bragging rights that come with it. Others want handling and dynamics. Some want good looks. Nakita Padayachee was drawn to the Toyota GT86 because of its sultry lines and classic sports car proportions.

READ: KZN floods: Toyota warns of delays in deliveries of Hilux and other models

"The first time I saw the 86, I knew I had to have it. I didn't even have to drive it to know that I wanted it and that it would be my next car," she says. Padayachee is the founder of Gas Babes Cartel, an up-and-coming car crew aimed at female motoring enthusiasts.

If you'd like us to feature your Ride on Wheels24, please email us here with some details and photos of your car, and we'll be in touch.

"I owned a Suzuki Swift, and I loved driving it, but the Toyota GT86 appealed to me for several reasons. The styling, the way it sat on the road, and the interior design came together perfectly for me. The sports seats and seating position make me feel like I'm 'driving' and in something extraordinary." 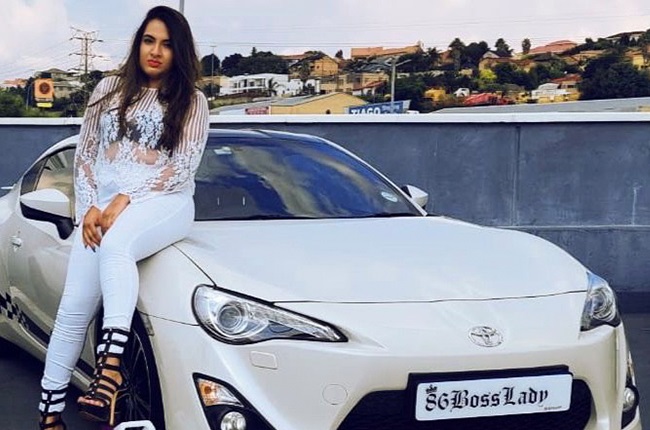 A deep love for cars (and driving)

Padayachee says her love for cars and car culture stems from her dad. "He was the one who lit the fire for me because he would take us to all the classic car shows around the country. I just loved the environment at car shows and the sight of classic cars like the Mustang. The Mustang is one of my favourite cars, and I would love to own a classic 1960s fastback model or a GT500. The 86 will have to do for now," she giggles.

Her Toyota GT86 is a 2015 model with very low mileage, although she drives it as much as possible. "The past few years have been challenging when it comes to driving because of the pandemic and the lockdown. I managed to get away for a few weekend drives around Gauteng, but most of my time with the car is spent on skidpans and gymkhanas. I enjoy controlling a car and the feel of counter-steering a drift with just the right amount of acceleration. My 86 is a dream to drive in this regard because I don't feel like it's intimidating to push the limit at all," she expounds. The Toyota GT86 is powered by a 2.0-litre flat-four engine co-developed with Subaru (as used in the BRZ). The companies used different intake and exhaust setups to produce slightly different power and torque characteristics. With 147kW of power and 205Nm of twist, it accelerates from a standstill to 100km/h in 7.6 seconds (at the coast) and on to a top speed of 226km/h. "It's not the fastest car out there, but it's more than enough performance for me. I currently have a standard engine setup, but I've upgraded my tyres to Michelin Pilot Sport for more control," she explains.

READ: R1.1million for a used '86 Toyota Cressida? These 'oldies' cost more than most new

Padayachee says that as her talent and skill behind the wheel improves, she's looking forward to adding a bolt-on supercharger kit and the upgrades that go with that. "I don't want something too powerful, but I want to build something unique that hasn't been done locally before. The car is so well-balanced and easy to drive and have fun with that I don't want to change that character too much. However, it would be nice to have more power here in Johannesburg," she laughs. Johannesburg's high altitude is a bane for cars like the Toyota 86 and enthusiast favourites like the Honda S2000. These naturally aspirated sports cars can lose up to 15% of their power and torque. Padayachee's supercharger plan should see her car achieve around 200kW on the wheels - nearly double what it makes up here without forced induction.

"I'm still considering the setup. I have to factor in upgrading the brakes, the suspension and adding some aero to the car to ensure it remains safe and driveable because it must remain a daily driver. I've made the subtle cosmetic mods, like the splitter up front and the rear spoiler, but once I finish under the hood, I'll turn my attention to the looks again. I'm just enjoying the car, learning more about car control and how to drift," she explains. Padayachee is no stranger to the car club scene, as she's a member of 86ofGP - a Toyota GT86 collective that's home to some of the coolest variants in SA. She has, however, decided to start a car crew of her own that's aimed at female petrolheads.

"Gas Babes Cartel is a place for empowered females to come together. Our mutual interest in cars is more than that, as we are a support group for each other. So many of our members just want to connect and socialise again after the lockdown. We host breakfast runs, hangouts, and the fun get-togethers such as Sushi Nights, but we are also highly focused on giving back to the community. As Gas Babes Cartel grows, we hope to host more charity drives and events around SA," she explains. Her crew was recently involved in a charity drive that assisted a local orphanage in achieving food security. "We want to do more as a car club. Yes, we will host track days and skidpan sessions, but we want to be more than that. Even though our members drive different types of cars, we lean on each other for contacts, whether for parts or tuning advice. As the country emerges from a severe pandemic and the lockdown, we want to be a safe space for female car enthusiasts to get out and drive again," she concludes.

You can follow Gas Babes Cartel here and learn more about joining the crew. Thanks to The357 for allowing us to shoot on its premises.

We live in a world where facts and fiction get blurred
In times of uncertainty you need journalism you can trust. For 14 free days, you can have access to a world of in-depth analyses, investigative journalism, top opinions and a range of features. Journalism strengthens democracy. Invest in the future today. Thereafter you will be billed R75 per month. You can cancel anytime and if you cancel within 14 days you won't be billed.
Subscribe to News24
Next on Life
WATCH | This '69 Dodge Charger is like Vin Diesel's and it has a Hellcat's beating heart