'Careful what I say': Albon in new Hamilton clash and misses Austria podium 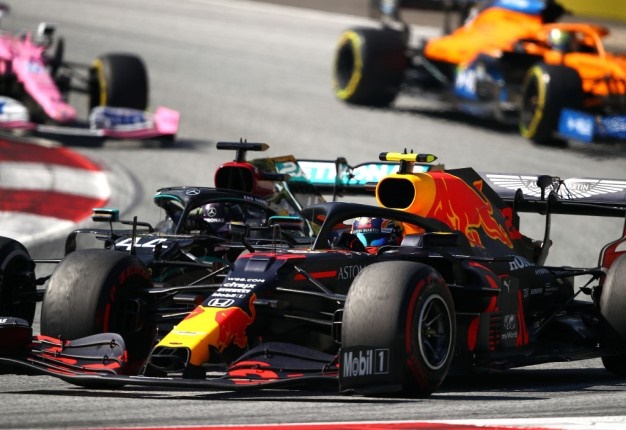 Alexander Albon of Thailand driving the (23) and Lewis Hamilton battle at the Austrian GP. (Photo by Bryn Lennon/Getty Images)

• Hamilton was handed a five-second penalty, but the crash forced Albon out of contention of a podium place

Alex Albon was left close to tears on Sunday when his hopes of seizing a podium finish at the season-opening Austrian Grand Prix were dashed by another clash with defending world champion Lewis Hamilton.

The London-born Thai driver, who came off worst when he collided with the six-time champion in last year's Brazilian Grand Prix, suffered again as he steered his Red Bull narrowly ahead of the Mercedes around Turn Four with 10 laps remaining.

Running on fresh soft rubber, Albon was on a late charge for glory following a late Safety Car intervention and pit-stop and he appeared to have gained a slight lead when Hamilton, on the racing line, under-steered into him.

Albon spun off and recovered, but was forced out of contention.

Hamilton was handed a five-second penalty and was classified fourth after his Mercedes team-mate Valtteri Bottas cruised to a controlled victory.

"I'm feeling a bit fresh right now so I have to be careful about what I say," said Albon afterwards.

"But, yeah, it is what it is and I really felt like we could have won that race.

"Of course, Mercedes had the outright pace today, but our guys did a great job with the strategy and honestly when I did my pit-stop and came out I soon realized it looked strong for us.

"Basically, I knew they (Mercedes) were on the hard tyres and for the first few laps all I was going to do was the overtakes.

"This one -- I feel like this one, I wouldn't say it hurts more, but I felt like Brazil was a bit more 50/50. I felt like I did the move already and I was kind of focused on Bottas, in front. It was so late, the contact.

"I know there's always a risk of overtaking on the outside, but I gave him as much space as I really could. I was on the edge."

Red Bull boss Christian Horner said: "This can be a pretty brutal sport sometimes and it feels like one of those days.

"Alex drove a great race and he didn't deserve that - and five seconds penalty for Lewis really doesn't do anything for him.

"It was just a misjudgement by Lewis at the end of the day and it'd be good if he apologised for it."

Hamilton, stuggling with gearbox sensor problems, said he accepted the blame for their collision and added that he couldn't believe that he had clashed again with the Thai driver.

We live in a world where facts and fiction get blurred
In times of uncertainty you need journalism you can trust. For 14 free days, you can have access to a world of in-depth analyses, investigative journalism, top opinions and a range of features. Journalism strengthens democracy. Invest in the future today. Thereafter you will be billed R75 per month. You can cancel anytime and if you cancel within 14 days you won't be billed.
Subscribe to News24
Related Links
F1: Mercedes' Bottas wins season-opening GP in Austria
Hamilton slams reports of increased salary demands
Next on Life
First Leclerc's watch in Italy, now Vettel's bag stolen in Barcelona