• Ferrari was one of the most recognisable brands in F1.
• Wheels24 reader Neil Hamilton shares his views about the team.
• He believes the team needs better management.
• For more motoring stories, go to www.Wheels24.co.za

Ferrari. One of the most recognisable brands ever. A name that evokes the passion, thoughts of speed, of multiples world titles, of great names like Fangio, Ascari, Hawthorne, Hill, Von Trips, Lauda and of course, the Red Baron himself, Michael Schumacher.

So where has it all gone wrong? And what can be done to turn it around? Well, first off, the performance has tanked since the deal between Ferrari and the FIA regarding the engine investigations. Secondly, the SF1000 was designed, initially, around that strong engine. Usually, suppose you have an aero disadvantage but a good engine. In that case, you can overcome the inherent weakness of the car by cranking on some more wing, thus adding downforce, knowing that the vehicle is strong enough power-wise to be able to make up for the drag increase…However, and yes, it is a simplistic argument, the SF1000 does not have any power, or at least, not nearly enough of it. Also, it does not have the downforce it needs to be able to compete in slow to medium speed corners. Now, this all has a compounding effect. To have any speed on a straight, you need less wing to make up for the power deficit. But lose a wing, and you lose downforce. Now, you aren't working the tyres hard enough, they don't get into the operating range, and end up graining and blistering as the car slides around.

Charles Leclerc has been able to somehow drive around this, unlike Seb Vettel, who has always preferred a car "on its nose" – in other words, the front end needs to grip, and he needs confidence that the vehicle will brake or steer as he needs it to, to extract the performance. 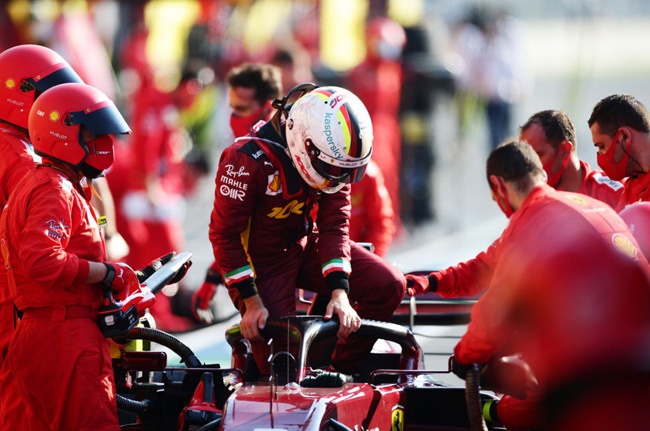 Right so how do we fix it?

Well, for Vettel fans, you find an Aston Martin based on the 2020 Racing Point, which is doing very well and has a Mercedes PU strapped to its back, and well, you hope for better things at the new team for 2021.

For Ferrari fans…. There is talk of a new engine next year. One can only hope that it is a massive step forward from the current PU – both for Ferrari as well its customers' sake. In 2020, all Ferrari powered teams have been slower, so the 1st major hurdle needs to be to get a new PU that is at a minimum on par with Mercedes Benz. The absolute irony is that, with Ferrari having had the strongest PU across 2018 and 2019, it forced Mercedes to further improve their own unit to the point where it is now, without doubt, the best on the grid – just as Ferrari got slapped on the wrist by the FIA for alleged cheating.2nd the aerodynamics need a revisit.

The SF1000 has had three major aero updates over the last few races, which have shown some improvement in race results, although the car still struggles in the hands of Seb Vettel. One can only hope that they develop the car further into 2021 to claw back downforce and at least have some performance with which to challenge the podium places.Lastly, Ferrari needs better management and strategy. Frankly, this has always been their weakness – the over-politicised atmosphere putting pressure on the team with heads rolling at the drop of a hat.

It seems that being team principal or lead driver at the Scuderia is a poisoned chalice – it is where World Champions come to have their careers and achievements placed under a spotlight and many, like moths in a flame, have wilted. Stefano Domenicali talks in the Ferrari garage during final practice for the Formula One Grand Prix of Italy at Autodromo di Monza on September 1, 2018 in Monza, Italy.  (Photo by Lars Baron/Getty Images)

Strategy is another major weakness the team has.

How often did we not hear Sebastian Vettel having to make calls FOR the pitwall when he was able to challenge for the title, and even when they do get it right (rarely), they are slow to react and often caught napping.

Think of how a bad call cost Alonso the title in 2010 – when he was stuck behind Vitaly Petrov's Renault for most of the race, allowing Vettel to steal the title for Red Bull.

Or 2013, where poor strategy calls also cost the team points which ultimately again cost Alonso the title in a closely contested fight – to think they went into the second half of the season with a 40 point lead if I'm not mistaken.

Ferrari, at times, are their own worst enemies. And sadly, until they have a decent PU, a competitive chassis, and a better strategy, they have no hope for a title.

Wins, maybe, but a consistent fight for an F1 title against arguably the best team and driver combination of the last 15 years will take a supreme effort—sorry fans. Still, I fear we may see another decade pass before a red-suited driver lifts a Driver's Title.

We live in a world where facts and fiction get blurred
In times of uncertainty you need journalism you can trust. For 14 free days, you can have access to a world of in-depth analyses, investigative journalism, top opinions and a range of features. Journalism strengthens democracy. Invest in the future today. Thereafter you will be billed R75 per month. You can cancel anytime and if you cancel within 14 days you won't be billed.
Subscribe to News24
Related Links
There's one Michael Schumacher stat that Lewis Hamilton will never smash
Why Ferrari's ills extend far beyond a dud car
Next on Life
First Leclerc's watch in Italy, now Vettel's bag stolen in Barcelona