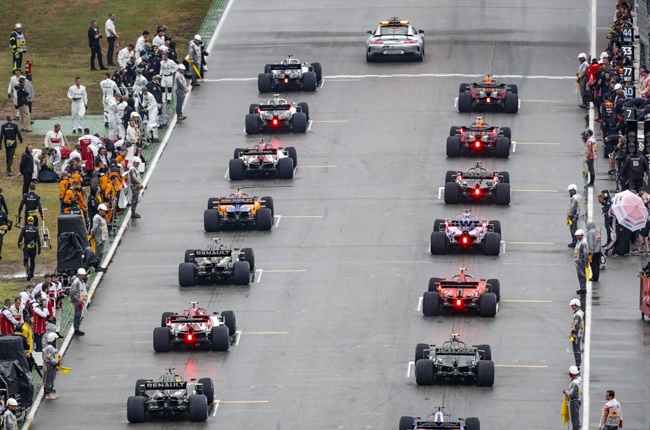 • A reverse grid could provide much-needed unpredictability to races.

Formula 1 Pundit Martin Brundle has urged the FIA and F1 teams to consider the reverse-grid proposal, after witnessing an entertaining race at Monza on Sunday.

After Lewis Hamilton kept his lead off the line at Monza and started to pull away from Carlos Sainz it seemed that the six-time World Champion was already on his way to another dominant victory.

But just when Formula 1 desperately needed a bit of excitement, Monza delivered.

A Safety Car to cover Kevin Magnussen's Haas which stopped near the pit entry and red flags when Charles Leclerc crashed at Parabolica instantly spiced the race up. And the Italian GP then became a new level of spicy when Hamilton was given a 10-second stop-go penalty for entering the pitlane when it was closed due to the stricken Haas.

Drama! Lewis Hamilton gets a 10-second stop-go penalty for entering the pit lane while closed Who wins this race?! ?? #F1 #Formula1 #ItalianGP #LewisHamilton

Hamilton was 23 seconds behind the pack after he served his penalty, but was still able to recover to P7 in the second half of the race. Meanwhile, his Mercedes team mate Valtteri Bottas was unable to make any impression on the cars ahead from P5 as Pierre Gasly took the win ahead of Sainz and Lance Stroll.

As a result of Monza, reverse grid races are being put back on the table for a third time, and Brundle is keen to see them introduced at certain events. Hamilton's rapid rise back up through the order showed why Brundle predicts the same driver would win the Championship, but not as quickly.

Brundle wrote in his post-race column for Sky F1: "Seeing normally front-running cars out of position and fighting through the pack made me immediately think again about occasional reverse championship-standing Saturday qualifying races in order to set the main race grid. This would give the smaller teams some oxygen out front for a while, would force teams to design cars which are better at overtaking instead of just aero-optimised for speed, and make for some fascinating must-watch action.

"The same car and driver would win the championship, just later, and by not such a margin. Let's at least try it at a suitable track just as we are trying a two-day meeting at Imola and a different track layout in Bahrain."

Do you agree with Brundle that a reverse-grid could spice up F1 racing? Email us with your thoughts.

Monza was a candidate

In his own column after the Italian Grand Prix, F1 managing director Ross Brawn wrote: "Monza was a candidate for a reverse grid sprint race when we were considering testing the format this year. Unfortunately, we could not move forward with it, but the concept is still something we and the FIA want to work through in the coming months and discuss with the teams for next year.

"We believe that yesterday's race showed the excitement a mixed-up pack can deliver and with next year's cars remaining the same as this year – our fans could be treated to the similar drama we saw this weekend at Monza. Of course, with a reverse grid sprint race, teams will set their cars up differently. Right now, Mercedes set their cars up to achieve the fastest lap and then to control the race from the front.

"If they know they have to overtake, they will have to change that approach. We will continue to evaluate new formats with the aim of improving the show but always maintaining the DNA of F1."

We live in a world where facts and fiction get blurred
In times of uncertainty you need journalism you can trust. For 14 free days, you can have access to a world of in-depth analyses, investigative journalism, top opinions and a range of features. Journalism strengthens democracy. Invest in the future today. Thereafter you will be billed R75 per month. You can cancel anytime and if you cancel within 14 days you won't be billed.
Subscribe to News24
Related Links
What a race! Pierre Gasly wins Italian GP, becomes first French winner since 1996
LISTEN | French commentator's emotions encapsulates Pierre Gasly's Monza win
Next on Life
First Leclerc's watch in Italy, now Vettel's bag stolen in Barcelona