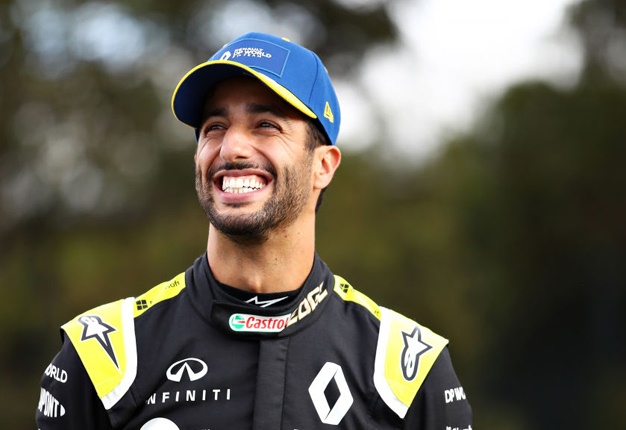 Australia's Daniel Ricciardo insisted Friday that he doesn't see his preparations being hindered when the delayed Formula 1 season finally gets underway in Austria next weekend.

Ricciardo, starting his final year as a Renault driver before moving to McLaren for 2021, said he won't allow the strict health protocols introduced in the wake of the coronavirus, to put the brakes on his push for an elusive title.

"Next weekend, I don't see any preparations being hindered," said the 30-year-old.

"We've got our driver space to warm up and to prepare for the race itself so... I guess it's more from a general hygiene point of view.

"But as far as getting into the car ready to go, I believe I'll still be able to use everything I have before to make sure I am hopping in the car one hundred per cent."

The F1 season endured a false start in Melbourne in March ahead of the coronavirus shutdown.

A curtailed calendar will now see eight races in Europe, starting at Spielberg next week.

However, they will all be behind closed doors while circuit and paddock access will be tightly controlled.

"The negative of course was not being able to compete, but being away from it reiterated how much I want and how much I miss it," added Ricciardo, who was ninth in the championship last season.

"I weirdly even miss the drivers. I am looking forward to seeing everyone."

Teammate Esteban Ocon returns to the sport a year after losing his drive at Force India.

The highly-regarded 23-year-old admitted he can't wait to get back behind the wheel after replacing Nico Hulkenberg.

"As a wait, last year was very difficult," the Frenchman said.

"This year is different because I am into a great team, I have a great challenge ahead, with a competitive car and I look forward to restart for sure."

Renault were fifth in the constructors championship in 2019 behind champions Mercedes, Ferrari, Red Bull and McLaren.

We live in a world where facts and fiction get blurred
In times of uncertainty you need journalism you can trust. For 14 free days, you can have access to a world of in-depth analyses, investigative journalism, top opinions and a range of features. Journalism strengthens democracy. Invest in the future today. Thereafter you will be billed R75 per month. You can cancel anytime and if you cancel within 14 days you won't be billed.
Subscribe to News24
Related Links
Ricciardo already has one eye on next year, but 2020 could be a telling season
Renault's immediate predicament: Back Ricciardo in 2020 or invest in the future with Ocon?
Next on Life
First Leclerc's watch in Italy, now Vettel's bag stolen in Barcelona