Should Formula One consider a return to refuelling? A fuel hose is seen as a Ferrari pit crew practice a pit stop practice after qualifying for the Bahrain Formula One Grand Prix at the Bahrain International Circuit on March 11, 2006 in Sakhir, Bahrain. (Photo by Clive Mason/Getty Images)
Clive Mason

• Refuelling allows cars to be driven at their intended limits.

• Is F1 about preservation or performance?

Last year, F1 touted the re-introduction of refuelling in the hope of creating more on-track excitement.

Having entertained thoughts on several other gimmicks in the past, and daring to execute some of them -  such as DRS-assisted overtakes (which sadly still persists), high-degradation tyres, double points for the season finale (as was trialled and failed at Abu Dhabi in 2014), though thankfully not reverse grids or qualifying races; at face value, this was not the worst idea to emanate from the FIA.

Except it was like trying to apply a band-aid to a gash requiring stitches.

Competition-wise, or for the lack of it, Formula One faces a multitude of issues. Through the continual development of technology, the evolutionary hurdles conspiring against close racing, comprise hypersensitive surface aerodynamics and an over-reliance on data and simulation models. This inevitably results in convergent race strategies. The other impediment is self-inflicted: regulatory imprudence such as the mandatory use of two too-often similar performing tyre compounds that force uninteresting one-stop pit strategies; and the parc fermé rule, which prohibits teams from making significant setup changes to a car after qualifying and before the race, thereby locking in its deficiency for the rest of the weekend.

Yet if the panacea to this is seen to be refuelling, the FIA's memory is shockingly short. The last period where in-race fill-ups were allowed was between 1994 and 2009 - hardly a period in the sport's collective subconscious that's heralded as the zenith of wheel-to-wheel duels. It is common knowledge that except for qualifying, today's F1 cars are driven nowhere near their ultimate pace. Refuelling allows cars to be driven at their intended limits, instead of the now-necessary spirit-crushing tyre and brake management that have come to hamper the sport in its present state.

It's proven by the numbers, too. At the race start, an F1 car carries 105kg of fuel. A two-stop refuelling strategy halves that load to 52.5kg; and three stops to 26.25kg, with associated savings of lap times and tyre wear over an upwardly curving scale.

But flat-out sprinting also showcases the drawbacks of refuelling, in that the race becomes a series of qualifying-style time trials, split into halves or thirds and fought against the stopwatch instead of competitors on track; with little incentive to fight as positions are gained or lost in the pits.

And spare a thought for audiences, who are in the dark over the running order until all pit stops have been completed.

Most damningly, refuelling eliminates strategic variance by holding the driver to a set pit window that can only be shortened, but not extended, to gain track position. 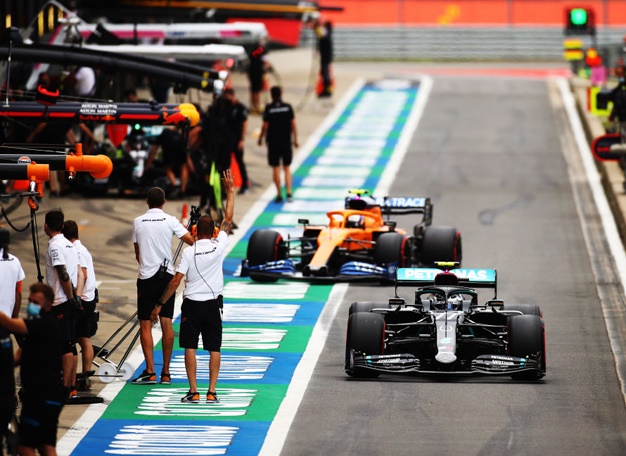 The fastest theoretical speed to cover a race distance can be reduced to a mathematical formula, which, once calculated, is defined by a car's pace, and, in turn, by resources, with a predictable outcome. Thanks to supercomputers, determining the optimal strategy is also no longer a challenge: all teams will arrive at the same answer, which again scuppers the excitement of varied strategies.

The postcard events from the refuelling era - Hungary in 1998, where Michael Schumacher made up 20 seconds in 19 laps to make his three-stop strategy work – and France in 2004, where Schumacher stopped four times to beat Fernando Alonso to the flag – pale in comparison to the other 270 races where refuelling was inconsequential, or even had a negative outcome on the race.

Then there's the optics of refuelling in a time when the greater automotive universe is having a crisis of green conscience.

Although F1 does a poor job of promoting hybrid engines (and an even poorer one of getting them to capture the public's imagination), audiences are reminded every now and then over how efficient the turbo hybrids are over their naturally aspirated predecessors. However, not ever seeing F1 cars take on fuel between stints means these claims are never demonstrably proven. And if nothing else, introducing refuelling after six years and billions poured into refining the current crop of engines would negate all the precious few PR gains made in selling hybrids as sexy in the first place. Greta Thunberg would certainly not approve.

Yet, the constant talk about improving F1's show will continue to ring hollow as long as the elephant in the room is being ignored: mass. Through the piling on of hybrid and safety accessories over time, at 746kg, today, an F1 car weighs 136kg more than in 2009.

2017's obsession of making the cars the fastest ever achieved its goal, but at the cost of raceability; forcing the necessity for tyre management. At least half of Lewis Hamilton's 2019 victories were achieved not through superior speed, but by treating his tyres better than anybody else. Yes, it's a skill, but is F1 about preservation or performance?

The quickest fix for a more significant strategic divergence (though sadly not the racing, which should be solved by a greater emphasis on underbody aero) in F1 would be to limit access to tyre wear data on which teams' simulations are based to dictate strategy. Then, significantly broaden the longevity differential between Pirelli's available compounds brought to every race, so that there is a genuine incentive to attempt a three-stop strategy if it can be shown to be faster than a safe one-stopper.

But refuelling alone - for the sake of change outside of the greater suite of competition-enhancing changes that F1 so desperately needs, remains the answer to a question that nobody has asked.

We live in a world where facts and fiction get blurred
In times of uncertainty you need journalism you can trust. For 14 free days, you can have access to a world of in-depth analyses, investigative journalism, top opinions and a range of features. Journalism strengthens democracy. Invest in the future today. Thereafter you will be billed R75 per month. You can cancel anytime and if you cancel within 14 days you won't be billed.
Subscribe to News24
Related Links
You’ll never guess who’s the most wanted person in F1 for 2021 – and it’s not a driver
The curious case of Ferrari’s missing pace
Next on Life
First Leclerc's watch in Italy, now Vettel's bag stolen in Barcelona