• Muhammad Uzayr Rajah is a 12-year-old drifter from Cape Town.

• His passion for drifting came about after seeing his father in a drift car.

• The young teen is working towards upgrading from 'driver' to 'drifter'.

He might only be 12-years-old, but Muhammad Uzayr Rajah is already hard at work at establishing himself not only as a driver but future drifter, in South Africa's drift scene. Speaking exclusively to Wheels24, Muhammad and his father, Raziek, delved into the unique nature of their relationship and how a shared love for drifting has strengthened the bond between them.

But, says Rajah Sr., it's not all fun and games: If Muhammad does not meet the set outcomes on his schoolwork, there is no drifting on that coming weekend.

The boy sits with a smile on his face, looking at his father with a guilty look; knowing full-well that this is not a one-way street. 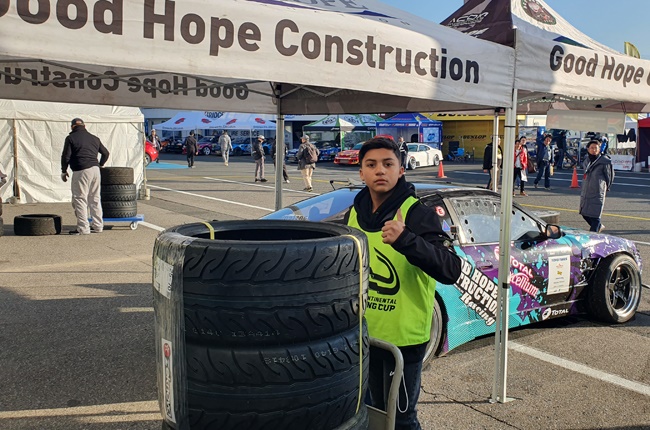 Muhammad Uzayr grew up with cars in the family. His father is an avid motorsport supporter; so much so that he began a drift series, called Drift Outlaws. This passion for speed and adrenaline rush filtered through to his son, who has taken up the interest to also try his hand at drifting. Raziek is clear on one thing, though: he will not live precariously through his son. Muhammad's life and ambitions are his own, and they, as parents, will support him as long as he does not do it to appease them.

Muhammad begins to explain that seeing his father perform at drift pitches was one of the first bugs that bit him. Following countless begging and nagging sessions, his mother urged his father to 'just take him' to Atlantis where renowned drifter, Shane Green, could teach him the ropes. Whereas Muhammad wanted only to learn clutch control, Green had other plans and told him to 'drive'.

WATCH: How this 12-year-old from Cape Town made history around Japan's Ebisu Drift Track

The teen gleefully says that he did not know what to do, but Green reminded him that, at that stage, he's been in a drift car for more than half his life; he's had to pick up on how his father does things.

And Raziek? Well, Muhammad says that he can still vividly remember his father's expression when he realised what had just happened: "My dad came to the pitch while we were busy and thought that one of the other guys were in the car. But when I got out… It was one of the most shocked expression's I've ever seen on my dad's face! I think he was more scared about what he was going to tell my mom." Raziek admits that when he saw then 10-year-old son drive a drift car, there was a strong sense of fear. Not only to how his wife would react upon hearing the news, but that something could have happened. Dealing with the first concern, he sent a picture of his son behind the steering wheel of the drift car in the family Whatsapp group. This, says Raziek, drew positive reactions from the clan, which went a long way in 'breaking the news' to Muhammad's mom.

But seeing his son doing what he was doing, on that very first attempt, reaffirmed a thought that he can't curb any form of potential his son has because of his fears and concerns.

Raziek affirms: "As a parent, when you stand by and see your son doing some weird stuff in a car… You do have that fear factor in you saying 'listen, is he able to manage it?'. That's why my wife and I decided to support our children and push them, but push them to a controlled limit. And when we see they have the ability to take it further, that's great." Like many children, Muhammad has a dream of being at the top of his game in ten years. By then he'll be 23-years-old, and a full-member of Drift Outlaws. Both he and his father point out that he is yet to become a drifter. Yes, he is being schooled in the sport and is getting training from some of the best in the business, but he is still just a driver.

Touching on his dream opponents, Muhammad says that he wants to, one day, go up against the very competitors he admires, one of them being his father. And when asked which local drifter he'd want to go up against, he had no hesitation as to putting his father at the top of that list.

"Going up against my father and drifting alongside him is actually one of my goals," Muhammad adds. "Drifting is something we both like, and if I can drift next to my dad and stay on his (car's) tail, that would be the max for me!" Muhammad Uzayr Rajah with his father Raziek (far right) and City of Cape Town Alderman, JP Smith next to him (Drift Outlaws)

We live in a world where facts and fiction get blurred
In times of uncertainty you need journalism you can trust. For 14 free days, you can have access to a world of in-depth analyses, investigative journalism, top opinions and a range of features. Journalism strengthens democracy. Invest in the future today. Thereafter you will be billed R75 per month. You can cancel anytime and if you cancel within 14 days you won't be billed.
Subscribe to News24
Related Links
WATCH | How this 12-year-old from Cape Town made history around Japan's Ebisu Drift Track
They're sportsmen, not lawless - Why Drift Outlaws will only participate in legal events
Next on Life
Zwartkops set for penultimate Mobil 1 V8 Supercars battle