Would you pay R1-million for a 2nd-hand VW Golf GTI Clubsport S?

Cape Town - When Volkswagen announced that only 47 units of its fastest Golf yet, the Clubsport S, was headed for South Africa, everyone wondered what it would cost.

When the cars arrived in Mzansi late in 2016, Volkswagen announced that each example retailed for R742 000. Since then all of Clubsport S units have sold.

But the Clubsport S is also an exercise in weight-saving (it weighs just 1285kg) at the cost of practicality; the two-door hot hatch has no rear seats, parcel shelf or insulating material.

Only a few week after the cars had been delivered, advertisements on local classifieds sites show the ultra-exclusive cars on sale for up to R1.6-million! That's ludicrous right? A scroll down that same page and I found another example for R999 000 and another two on sale for R899 000.

If you don't believe me, have a look. Are the men or women flipping these super powerful Golfs going to get what they want and more importantly is it worth it? Bear in mind there are only 400 in the world.

Wheels24 reader Clayton responds: "One has to be on crack cocaine to pay that for a little overrated GTI that only pimple faced teenagers have wet dreams about."

Would you pay more than a R1-million for a VW Golf GTI Clubsport S? Let us know via emailor on Facebookand Twitter. 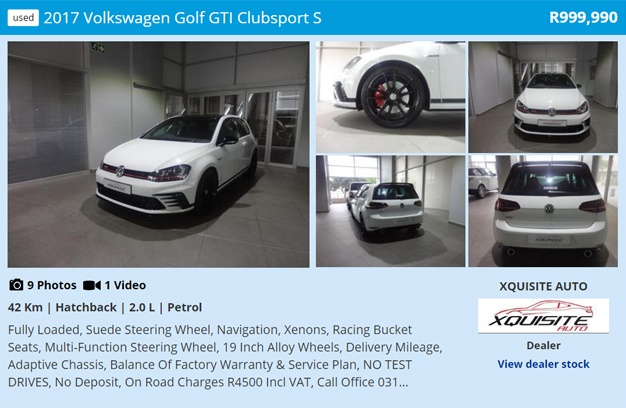 We live in a world where facts and fiction get blurred
In times of uncertainty you need journalism you can trust. For only R75 per month, you have access to a world of in-depth analyses, investigative journalism, top opinions and a range of features. Journalism strengthens democracy. Invest in the future today.
Subscribe to News24
Related Links
The Golf GTI Clubsport S stands tall amongst supercar giants
The Golf GTI Clubsport can be driven hard anywhere
Next on Wheels24
AutoTrader Vehicle Search