I’ve always had a soft spot for retro bikes, especially the ones that not only look the part but also have a period feel.

The problem with the latter, though, is that it comes at the price of period handling and performance which, while authentic, can be a little irksome to somebody used to modern high-performance bikes.

This was probably what got Triumph’s engineers thinking about combining decent performance and handling with the old-school feel of their Bonneville series. The result was the café racer-styled Triumph Thruxton, introduced in 900 cm³ guise in 2004 before inheriting a tuned version of the Bonneville 1200 mill in 2016. 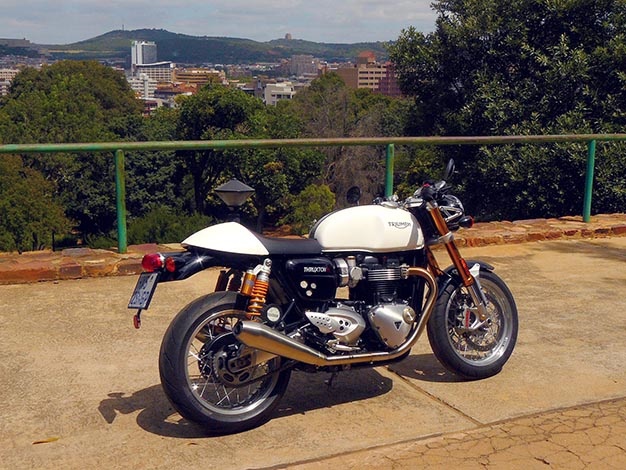 Like its Heritage stablemates, the Thruxton has a number of detail touches that preserves the Sixties look: there is a "timing chest" on the right, a "primary chain case" on the left, twin "rocker boxes", a right-hand side panel that resembles a dry-sump oil tank and throttle bodies shaped to look like carburettors (the bike is fuel injected).

It also has twin shock absorbers at the rear, while the instrument cluster is dominated by two chrome-ringed analogue dials. The café racer styling comes through in the dropped handlebar and the rear seat cowl. The Thruxton doesn’t fail to attract attention – from young to old, racer to recreational rider, they all gawked at the bike whenever I stopped at a public place. The young enjoyed the design, the old reminisced about the Triumphs they rode way back when. But despite its retro-sport styling, the Thruxton is not uncomfortable in daily use – the seating position is relatively upright an uncramped.

This, combined with the engine’s generous low-end torque, makes it a practical every-day ride (provided that you’re prepared to carry a backpack, because there is zero luggage space with the rear seat cowl in place). 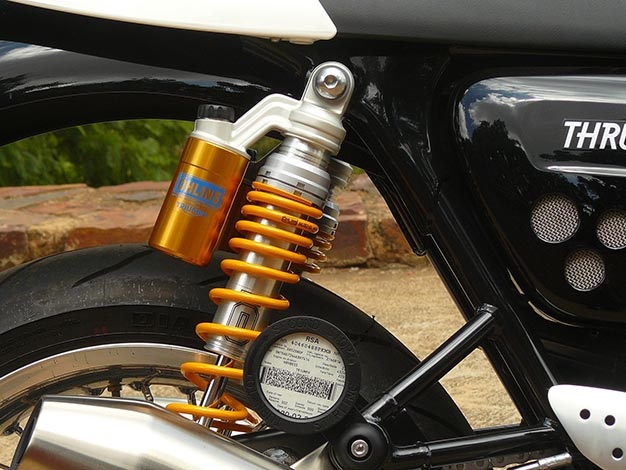 The retro-sport feel carries through in its handling – it retains that classic-bike feel so beloved of the Bonneville series, but handling has been improved by an order of magnitude. You can ride it with abandon, pinning the throttle on straights and throwing it at curves with impudence, and the Thruxton will happily oblige.

That said, the Ohlins rear suspension and Brembo brakes don’t magically turn the old-school suspension geometry into what you’ll find on a modern sport bike – if you push hard enough, you can overwhelm the suspension.

In its high-performance tune, the 1200 Bonneville engine endows the Thruxton with very respectable numbers, especially in the torque department. As a result, the bike feels nimble and powerful, and seduces you into going faster than you might have intended. The already enticing roar of the motor is transformed into a veritable symphony by a pair of twin exhausts with reverse-megaphone end cans, which doesn’t help much to quell the desire to open up just for the fun of it. And to keep you feeling in a great deal of control than any Sixties café racer would have had, the bike sports switchable traction control, a slip-assist clutch and the usual riding modes (Road, Rain and Sport).

More modern touches come in the form of LED daytime running lights and rear light, as well as a headstock-mounted USB socket provided so riders can charge their ubiquitous mobile devices. There’s a fine line between updating a classic and creating a modern bike, and Triumph has managed to keep the Thruxton on the classic side of the line, while giving its rider the safety and exhilaration of a modern bike.

It is hard not to imagine yourself back in the Sixties when you’re sitting astride a Thruxton – it takes you back to a time when biking was simpler and more personal. But it also offers all the amenities you need to survive in latter-day traffic, and that’s what makes it a very special bike indeed. We live in a world where facts and fiction get blurred
In times of uncertainty you need journalism you can trust. For 14 free days, you can have access to a world of in-depth analyses, investigative journalism, top opinions and a range of features. Journalism strengthens democracy. Invest in the future today. Thereafter you will be billed R75 per month. You can cancel anytime and if you cancel within 14 days you won't be billed.
Subscribe to News24
Next on Wheels24
Ducati dominates at Le Mans as Bastianini wins, SA's Binder finishes 8th (from 18th) in French MotoGP