• Features on the BMW GS models include new headlights and technology upgrades.

• Models can be de-specced to a certain level.

Nine degrees Celsius, lots of rain the previous evening and Enduro Pro mode selected. Both the front and rear tyres are sliding as I try to guide the GS along the Montagu Pass outside George. Keep your momentum and allow the BMW to move a little, and you quickly sense that is the best plan. The moment the surface changes to a rockier nature, there is also more grip and the GS kicks up some rocks and dust as I twist the throttle.

These bikes are some of the most popular motorcycles in South Africa, and for good reason(s). Whether you are a commuter or heads off-road every month for a couple of days, the standard GS and GS Adventure have it covered. Just over two years ago, BMW Motorrad South Africa launched the then-new 1250 GS in KwaZulu-Natal. I rode one of the test units down from Durban to Cape Town over the course of three days.

WATCH | 40 years of BMW GS – and the story continues

During this trip, I stayed on the black stuff but was immediately impressed by the utter comfort the GS offered. The torque from the engine combined with the suspension setup resulted in a near-effortless experience, even after having covered more than 700km in one day. This has not changed, heading over a very wet Montagu Pass and snaking along tens of kilometres of wet and dry gravel roads into the Klein Karoo, the GS does a sterling job. I'll admit at times, I thought I'd be intimidated by its size, but over the slippery surfaces, the GS did a sterling job. Once on the open, tarmac roads, we could increase our speeds and further enjoy the stunning scenery.

Updates are visual as well as in terms of technology. The dynamic traction control (DTC) with a new 'eco' riding mode is now standard. Then there is the dynamic engine brake control which now forms part of the Pro riding modes. The Integral ABS Pro is also now part of the standard equipment. Upfront, there is a newly developed full-LED adaptive headlight that features a new lighting function that turns into the corner when the rider turns, assisting in lighting up the corner. To commemorate 40 years of the GS, there is a black and yellow model celebrating one of the highlights in GS history, the R 100 GS. These are just some examples as there is a long list of optional accessories, and customers can even untick a few features to make the motorcycle more affordable, although BMW confirmed that it would only be allowed to a certain extent.

If you don't want to venture off-road, the RT might be an appealing alternative, also now launched in South Africa. Using the same boxer, 1 254 cm3 engine and 6-speed transmission as the GS, the RT is built for touring. As with the GS, the engine offers linear performance, but there is another level of comfort. The fairings, as well as the massive windscreen, deflects the wind away from your body. The windscreen can also be electronically adjusted to direct the airflow away from your head. The seating positing is straight up, with your arms and hands being lower down compared to the adventure bikes. Mirrors are fixed lower down, giving good visibility behind you. Below the handlebars, on each side of the steering column, are two storage compartments.  The new and large (and wide) 10.25-inch TFT colour screen supplies you with various information you would expect as well as a host of more options and information from driver settings to heated seat/grip levels and speedometer and rev counter. 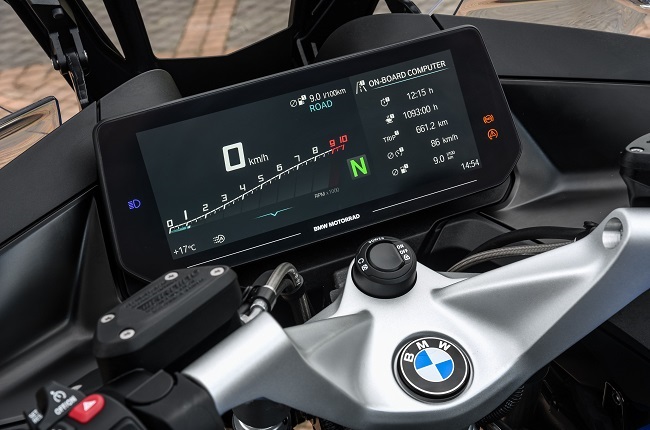 Pillion riders' legs will bend perfectly over the pannier boxes, having access to the rear part of the soft seat. Dynamic Cruice Control (DCC) comes as standard, resulting in the system even using engine braking when heading downhill or the braking system if needed. The optional Active Cruise Control (ACC) uses radar technology to adapt the bike's speed to the vehicle in front of you. The RT also features several new and optional technology features.

Not competitors at all, but living in South Africa, the GS range offer the better option versus the RT. The GS is just as comfortable on the road as the RT, and in some cases even better, and the big plus is obviously that you can venture off-road – which you must do living in South Africa! If you do that, the additional off-road equipment the Adventure model offers should be considered.

Even the smallest of upgrades, such as the sharper and larger footpegs, made a significant difference during our time on these machines. There is a good reason the GS range sells so well in South Africa, and that is unlikely to change anytime soon.

We live in a world where facts and fiction get blurred
In times of uncertainty you need journalism you can trust. For 14 free days, you can have access to a world of in-depth analyses, investigative journalism, top opinions and a range of features. Journalism strengthens democracy. Invest in the future today. Thereafter you will be billed R75 per month. You can cancel anytime and if you cancel within 14 days you won't be billed.
Subscribe to News24
Next on Wheels24
BIKES | Moto Guzzi's V85 TT Centenario arrives for first customer in SA