• Brad Binder reflects on his Austrian GP victory - on one of the hardest wins in his motorcycling career.

• Binder adds that he's looking forward to the prospect of brother Darryn joining him in MotoGP next year.

Still reeling from his epic victory at the drama-ridden 2021 Austrian Grand Prix, Brad Binder took time out of his schedule to give local media insights into just what went into that historic win. The South African may have only won his second race in MotoGP, but this one was rather special and reaffirmed the spotlight on a man who has championship gold in his sights.

Recapping the Austrian GP, the Red Bull KTM Factory Racing rider opted to stay out on dry tyres when most of the field, including the riders ahead of him, opted to switch to their wet bikes. With rain intensity increasing every second, it became a matter of 'picking his moments' as Binder went from fifth to first with three laps to go. His bike became almost impossible to ride on the wet track, and a chance at victory grew slimmer as the race drew on.

Yet, Binder managed to do the impossible and secured victory at Red Bull and KTM's home race. In qualifying for the Austrian GP, Binder did not have the greatest of laps. Viewed in the broader spectrum of how his 2021 has gone so far, it was one of the better Saturday performances, despite being another challenging outing. But it takes a mature individual to recognize the areas he needs to improve on, as the boytjie himself admits: "It's unfortunate that I've always not been fantastic at doing one fast lap, and that's what qualifying is."

While Saturday performances may not have been all that great in recent times, Binder would always turn his fortunes around on race day. Come time for a Grand Prix, though, and Binder would ride his bike to the bone. Always aiming for maximum results regardless of the technical challenges - these days, his Red Bull KTM is struggling with the new tyres - the (now) two-time MotoGP winner is relentless in pushing himself and his iron steed to the limit.

This limit is often tested and was again the point of discussion in the race's closing stages. Running in sixth with a handful of laps remaining, Binder began calculating 1) how much time he'd lose per lap staying out on a wet track with a bike set up for a dry race, and 2) how much time his rivals would lose - and gain(!) - pitting for the wet bikes. He knew that he'd be pushing the limit and that if he should win, it'd be by seconds. Ducati rider Francesco Bagnaia, who finished in second place, was one of the riders ahead of Binder who opted to pit and was significantly faster with his wet bike than those who chose to stay out.

LISTEN: SA's Brad Binder on his Austrian MotoGP win: 'I lost my brakes with two laps to go'

While Binder struggled for grip and pace, Bagnaia had the exact opposite experience out on track. Binder's calculations eventually paid off, but it was not without stress. The South African explains: "There's always a right thing to do, and there's a wrong thing to do. In the moment, you've got to roll the dice and decide what you're gonna do.

"I always feel much better when I've made a decision myself, and I follow through with it rather than second-guessing something and doing the opposite. I had no doubt that it was the best plan to stay out. Had the race been one lap longer, it would have been a different story. But everything fell into place, and I'm super happy to have walked away with that win, for sure!"

Do you think Brad Binder can elevate his game and become MotoGP champion? Email us your thoughts or use the comment section below.

We are going to remember @BradBinder_41's #AustrianGP win for a long long time ??#MotoGP pic.twitter.com/DcfJOgkW1h

Brad's brother, Darryn, has been competing in Moto3 for the last few seasons, but he has the unique chance of skipping Moto2 and making his MotoGP debut in 2022. For South Africans who have been following the two brothers' progress, this is nothing short of ecstatic news, and the prospect of the two Binder brothers running rampant in MotoGP is a sensory delight.

About the prospect, Brad says it would be "super exciting to see my brother on the grid with me next year. Nothing's done yet, and if it can all come through, I would be super happy. It would be amazing."

Darryn Binder tested Yamaha's R1 superbike on Tuesday, 17 August, with a successful outing leading to a possible MotoGP ride in 2022. Darryn is in line to race for Yamaha's satellite team, SRT Yamaha, alongside a yet-to-be-named rider. If successful, the two brothers, who are sharing a home in Europe, will be on-track rivals, but Brad is hopeful: "(Darryn's future) is not in my hands and it's all up to Petronas and Yamaha if they're going to take him or not. It's all talk right now, and I hope it turns into a full deal." 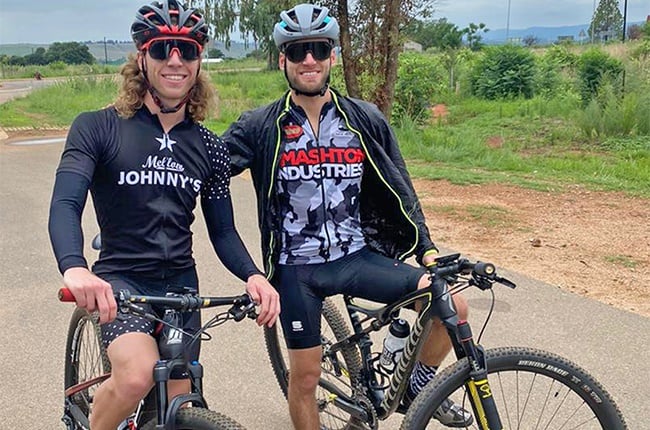 Darryn (left) and Brad Binder on a recent holiday in South Africa
Supplied Maryann Shaw Communications
We live in a world where facts and fiction get blurred
In times of uncertainty you need journalism you can trust. For only R75 per month, you have access to a world of in-depth analyses, investigative journalism, top opinions and a range of features. Journalism strengthens democracy. Invest in the future today.
Subscribe to News24
Next on Wheels24
MotoGP: Maverick Vinales, Yamaha part ways with immediate effect